When two anchors are not enough 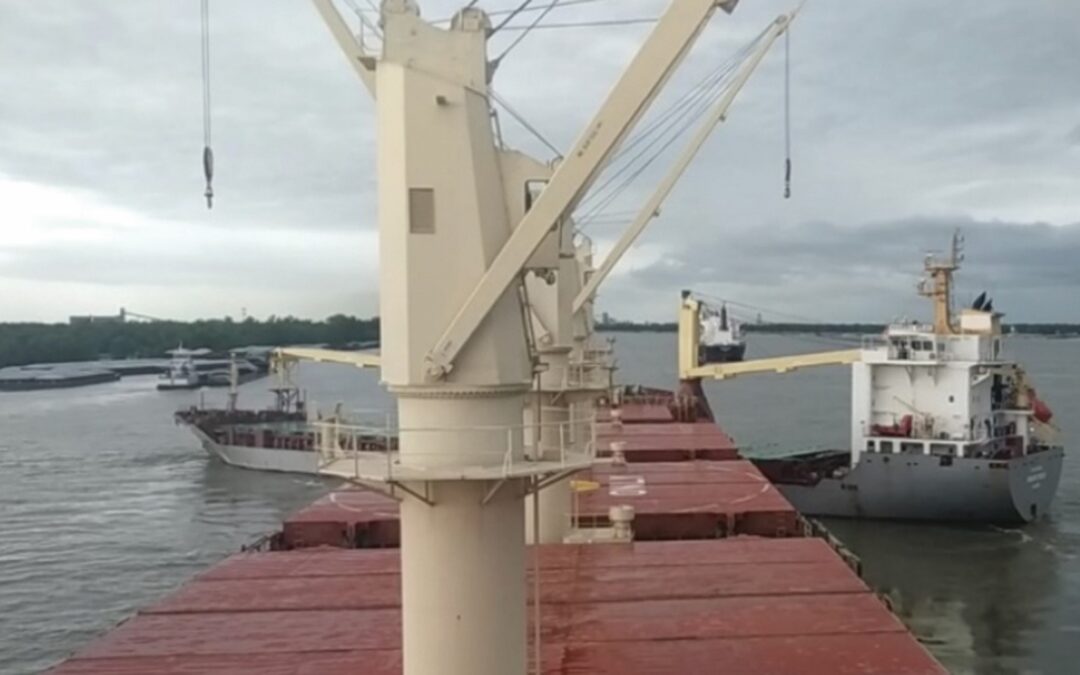 Always check if a ship is stable after anchoring. The Nautical Institute gives this warning in its latest Mars Report in which a loaded general cargo vessel started dragging anchor and collided with another anchored vessel and a shore dock.

A loaded general cargo vessel had left berth, but went to anchor in the river for repairs before proceeding to sea. The pilot showed the master and chief officer his intended anchoring position on the ship’s ECDIS and informed them of his plan to use both anchors, establishing a ‘good spread’ between the port and starboard anchor chains. There were thunderstorms forecast for that afternoon that could bring strong and gusty winds to the area and river water levels were high, causing an outflow current of about four to five knots.

About fifteen minutes after the port anchor was let go, the pilot informed the master that the anchoring was finished. The pilot was satisfied with the situation (position 3), but recommended keeping the engine on short standby due to the inclement weather that was due to arrive and the strong river current. Another issue was that the vessel’s stern was only 150 metres from the bow of another ship anchored astern (shown in red in the diagram).

The pilot left the vessel a few minutes later. Unknown to him, the vessel was not in a stable condition and continued to yaw between the anchors.

Even though the vessel astern was only 150 metres away, the officer of the watch (OOW) set the anchor watch alarm on the ECDIS for a radius of 180 metres. Soon, the vessel was moving astern at a speed over the bottom of about 1.8 knots. At 1602, there was a watch handover; the relieving officer, unfamiliar with the vessel’s ECDIS because he was new, asked why the ship was not in the middle of the ECDIS ‘anchor watch’ circle. The officer being relieved offered to help familiarise the relieving officer with the ECDIS, but they did not further discuss the vessel’s position at anchor as they went on to other business.

About ten minutes later, the OOW aboard the vessel anchored astern called on VHF radio giving a warning – he had noticed that the general cargo vessel was moving astern toward his vessel.

At 1639, the OOW became aware that they were now too close to the other anchored vessel. He contacted the engine room and engine control was received on the bridge nine minutes later. The master began using full ahead engine, along with the bow thruster and rudder, to reduce the swing and bring the ship ahead. By this point, the ship was unable to turn to starboard away from the other anchored ship. At 1655, with the first vessel now broadside to the current and pushing on the bow of the other anchored vessel, both vessels were now dragging anchor.

Tugs were requested to help hold and stabilise the vessel. The first tug arrived on scene about thirty minutes later. A further thirty minutes passed before pilots arrived on both vessels, but more tugs were needed to extricate the vessels from their position. Although these arrived some time later, the vessel nonetheless hit a shore dock at a speed of 6 knots before its bow grounded on the river bank. Damage to the two vessels and the dock were estimated at USD 16.9 million.