Dragging anchor due to wind ends up in collision 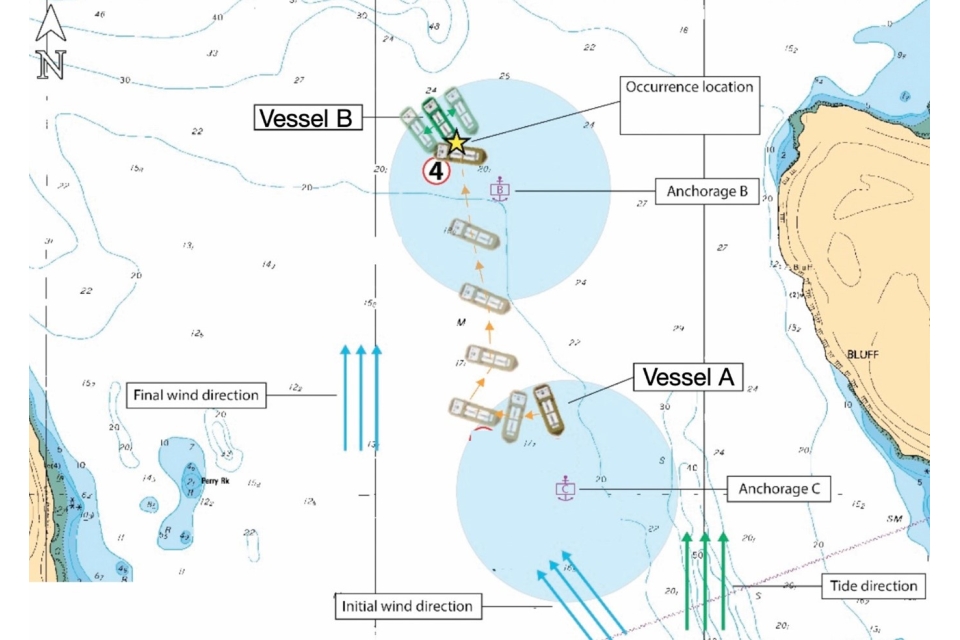 Even with engines and anchors, limited space in some anchorages can easily trump these options when winds are strong. Vessels are safest at sea in these circumstances. The Nautical Institute gives this advice in its latest Mars Report in which two bulk carriers collided due to a dragging anchor.

Later that night, the NAVAREA weather forecast indicated an approaching gale 636 miles away with southeasterly winds of 25–35 knots. The local weather forecast indicated that strong winds of 20–33 knots were expected to occur in the area, but the crew on vessel A were unaware of either forecast. A few hours later, the wind speed had indeed increased and was now 28–33 knots. Soon after, vessel A began yawing due to wind gusts.

Vessel A’s dragging anchor alarm activated, and the officer of the watch (OOW) noticed on the radar that his vessel was drifting towards vessel B. The master and the engine room were informed of the situation and the anchor team went forward. An additional two shackles were released on the starboard anchor chain and the team attempted to deploy the port anchor too, but it would not release.

By now, vessel A was drifting towards vessel B at a speed of about 1.4 knots under the influence of the wind on its high freeboard and the tidal flow. Meanwhile, vessel B’s crew were informed of the oncoming vessel A. They paid out a total of eleven shackles on the anchor chain in order to allow more room and avoid contact between the vessels.

The anchor team on vessel A eventually managed to release the port anchor from its stowed position and deployed about twelve shackles. By now, the main engine was also available and was used in an attempt to move away from vessel B. Nonetheless, vessel A’s port mid-section collided with the starboard bow area of vessel B (position 4 on diagram).

The official investigation found that, among other things, the crew of vessel A had not collected the local weather forecast for the day of occurrence from the VHF radio, weather fax, and MF broadcast, nor had they obtained an up-to-date weather warning from local authorities. As a consequence, the vessel and crew were unprepared for the impending adverse weather conditions.

In addition to the advice already cited above, The Nautical Institute points out that this is not the first Mars Report where a lack of situational weather awareness has led to a vessel dragging anchor. Weather awareness should be a priority of all OOWs and masters while at anchor.

This accident was covered in the Mars Reports, originally published as Mars 202216, that are part of Report Number 354. A selection of this Report was also published in SWZ|Maritime’s May 2022 issue. The Nautical Institute compiles these reports to help prevent maritime accidents. That is why they are also published on SWZ|Maritime’s website.