From being anchored to anchorage disaster movie in fifteen minutes 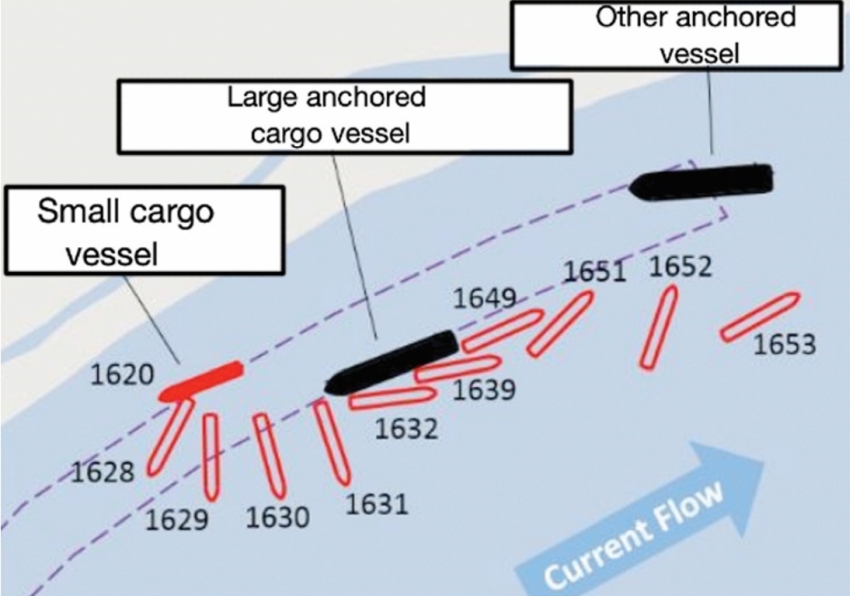 In tight anchorages and strong currents, main engines should always be on standby and the vessel’s position checked as if the vessel is underway. The Nautical Institute gives this advice in its latest Mars Report in which a vessel went from being anchored to a disaster movie within fifteen minutes.

A small general cargo vessel was due to travel downriver. While still on the berth, the pilot determined that he would not be able to reach the end of the daylight-only restriction zone before darkness fell. He discussed a plan with the master to begin the transit, but go to an intermediate anchorage for the night. The only available anchorage was an area approximately 1.1 miles in length and 100 metres wide. That area already had three vessels at anchorage and river currents were running strong due to high water conditions.

The transit downriver was without incident. With the assistance of two tugboats, the vessel was anchored at 16:00 using both anchors, placed at the ten and two o’clock positions respectively. By about 16:17, the anchor chains had become taut and the stern of the vessel was about 152 metres from the bow of a much larger general cargo vessel anchored astern.

At about 16:26, as the pilot boat approached to disembark the pilot, the vessel’s bow swung quickly into the river current. By the time the pilot regained the bridge, the ship was almost perpendicular to the river. The pilot requested ‘half ahead and starboard’, but the engines were not able to overcome the force of the river current, and the anchors dragged.

A few seconds later the pilot informed the master that they were going to collide with the bulk carrier anchored astern. The pilot radioed the two tugboats that had been assisting during the anchoring, requesting that they return as quickly as possible. The ship’s whistle was used to sound the danger signal and warn of the impending collision.

About fifteen minutes after being “safely” anchored, the vessel was being carried by the current at a speed of 5.5 knots. The vessel drifted until its propeller caught the starboard anchor chain of the larger vessel anchored astern. The entanglement pulled the drifting vessel’s propeller shaft outward damaging reduction gears and cracking the gear box.

The larger anchored vessel began to manoeuvre under power as the bridge team tried to mitigate the consequences of the collision. Their initial manoeuvre of coming ahead caused the drifting vessel to list. With no propulsion, the bridge wing torn off, the ship listing, and the anchor chain of the large vessel still wrapped around the stern, the drifting vessel’s crew mustered on their vessel’s main deck near the cargo hatch covers. The list became so great that it was decided to abandon ship, and the crew transferred onto one of the tugboats that had returned to the scene.

A few minutes later, the anchor chain of the larger vessel broke, freeing the drifting vessel. Once released from the chain, the vessel floated free, and the crew returned to their ship as it drifted down the port side of the larger vessel. The vessel was subsequently corralled by five tug boats and the situation stabilised. Damages to the drifting vessel were confirmed at over USD 2 million.

The official investigation found, among other things, that the anchorage used was originally designed for three vessels, and was normally occupied by only two. At the time of the accident, there were four vessels anchored there. After the accident, local authorities reassessed the risks of the anchorage for high-water periods and decided to limit occupancy to one vessel.

This accident was covered in the Mars Reports, originally published as Mars 202204, that are part of Report Number 351. A selection of this Report was also published in SWZ|Maritime’s February 2022 issue. The Nautical Institute compiles these reports to help prevent maritime accidents. That is why they are also published on SWZ|Maritime’s website.