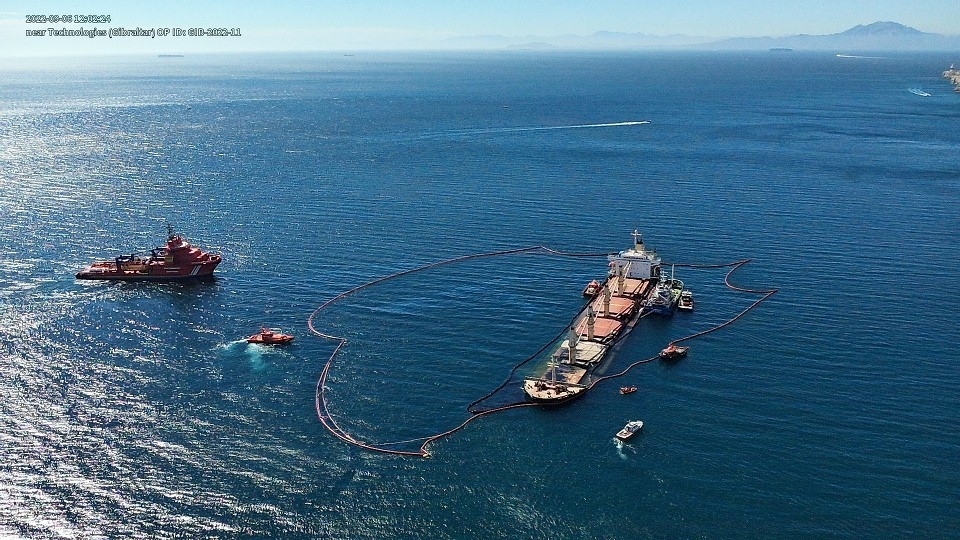 The situation of the partially sunk bulk carrier OS 35 has remained stable overnight. Onboard, the situation in the engine room is under control, and works have continued throughout the night. So far, about 310,000 litres of fuel oil and diesel oil have been removed from the vessel.

On Wednesday, 31 August, the hull broke, but the two parts have not yet fully separated. The vessel is sitting 700 metres off the shoreline of Catalan Bay.

On Saturday (3 September) water ingress was discovered in the OS 35’s engine room. As a result, the vessel’s own systems could no longer be used to pump fuel out and independent, off-ship systems had to be deployed. Investigations into the cause found a manhole had not been totally sealed. The stress on the hull caused the keel duct to flood and water then seeped into the manhole and then the engine room.

Water ingress into the engine room is very light and under control.

Due to high winds some of the oil spills booms were displaced. This involved the secondary boom around the vessel and the boom at Catalan Bay. Both are now back in place. The Gibraltar Port Authority is working with Salvamento Maritimo to source heavier sinkers for the secondary boom that will increase its resilience against strong winds.

The catamaran Horizon has so far recovered approximately 4000 litres from the free-floating sheen. The vessel returned to operations yesterday following technical issues the day before that prevented works continuing overnight. The Horizon is currently targeting free floating oil patches outside second layer of boom.

There are now five vessels in the area with sorbent booms deployed and a further two pairs in J formation. Active skimming work continues directly on the deck of the OS 35, which is working to recover dark oily patches before they reach the first boom.

The Captain of the Port has confirmed that the following total quantities of fuel are believed to have been successfully recovered from the OS 35 (subject to more accurate measures being taken):

It is important to note that the table provides the figures as declared by the vessel at the beginning of the incident. In the same way as more diesel oil has been extracted than was declared as being on board, the situation could arise where there was less fuel oil on board in reality than was declared.

Additionally, the figures extracted may include water mixed with oil in the vessel’s tanks before extraction.

With the exception of Tank 2, the salvors are confident that all concentrations of pumpable oil have been extracted, including those in the main engine room tanks. Some product remains in Tank 2, which the salvors plan to attempt to extract.

There are still small tanks around the ship with small quantities that need to be emptied. These small tanks are not expected to be holding large quantities of oil. Divers are investigating the presence of any oil concentrations in void spaces and non-tank spaces. Any significant quantities will also be pumped out to the furthest extent that this will be possible.

It is important to outline that whilst the majority of fuel has been removed from the vessel, continued discharge of pollutants is expected until the time that the salvage operations are complete.

Step down from major incident posture

The salvors and the Captain of the Port have advised that the majority of the fuel has been removed from the OS 35 and that the second stage of the salvage operation – to recover as much of the vessel’s contents and cargo as safely possible – will now commence.

The Government has therefore decided to step down from the Major Incident posture. This will allow the Captain of the Port to re-establish normal port operations insofar as will not interfere with continued pollution prevention and salvage operations.

Pictures by the Government of Gibraltar.