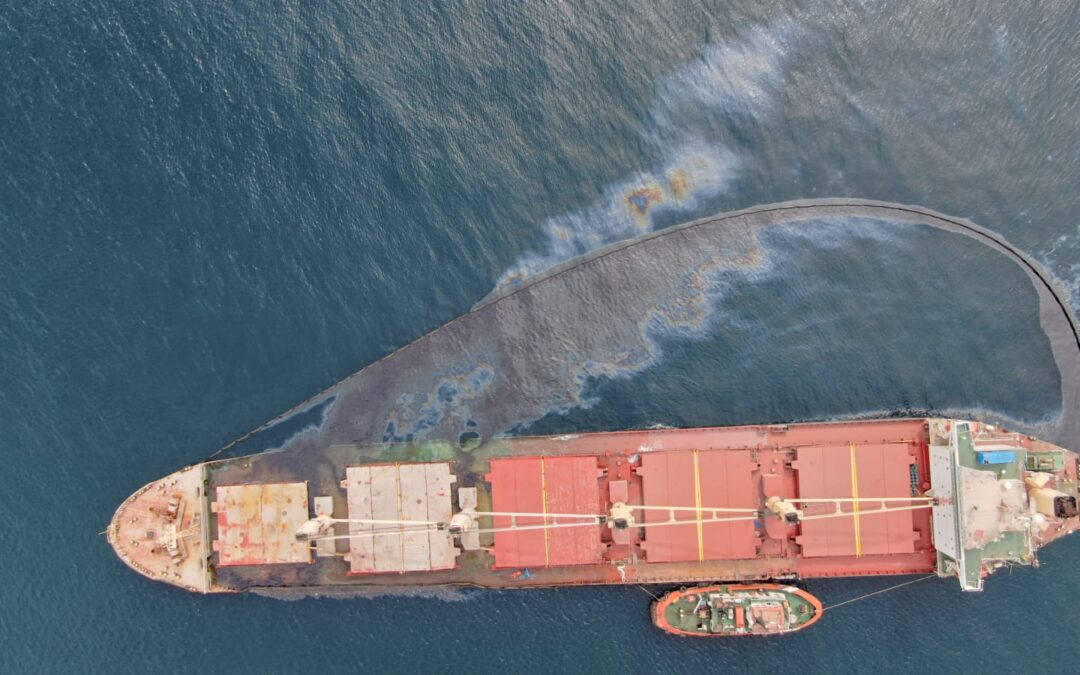 The bulk carrier OS 35 that partially sank after a collision and then suffered its hull breaking while beached in the Port of Gibraltar is now leaking heavy fuel oil after seals had come loose. Most of the oil is being contained by a boom. A clean-up operation to catch the free floating oil is underway.

The Gibraltar Port Authority (GPA) has confirmed a leak of heavy fuel oil a small amount of which has escaped the perimeter of the boom.

The salvage team onboard have identified the source of this leak to two tank vents from the vessel’s bunker tanks. All vents had previously been sealed, but the seal of two vents became loose on the crumpling of the vessel. Divers on scene have been able to re-establish the seals, so the GPA is in the process of stopping the release of oil from the vents.

The Gibraltar Port Authority J formation and the tug Salvamento Maritimo Luz de Mar are both downstream from the vessel collecting the free floating oil that has already vented. Skimmers are currently being deployed onboard to start collecting what is inside the boom. Both the GPA and the Luz de Mar will also deploy sorbent booms.

Fuel removal about to begin

Salvors were already planning to remove oil from the vessel using a barge alongside, but this process could not be started before the vessel’s hull broke. The vessel carries 215 tonnes of heavy fuel oil, 250 tonnes of diesel fuel and 27 tonnes of lube oil.

The Government of Gibraltar now says the slops barge will be brought alongside the OS 35 shortly to begin to pump out its fuel. Pumping out all of the fuel is expected to take about fifty hours.

The Gibraltar Port Authority has confirmed that it has begun to pump diesel out of the OS 35 and in to the slops barge that has successfully been brought alongside. Parallel operations working towards the pumping out of fuel oil are ongoing.

The Captain of the Port has also confirmed that the leak of low sulphur fuel oil from the tank vents is fully under control.

Simultaneously, a skimmer has been deployed and is successfully removing the fuel oil that is contained within the boom. So far, approximately 4000 litres of a mix of oil and water have already been recovered from inside the boom that is alongside the vessel. This represents at least fifty per cent of the oil that was contained inside the boom. The GPA continues collection using skimmers.

The Gibraltar Port remains closed in order to focus all its operational capacity on dealing with this emergency. However, some operations that have no impact on the port’s resources necessary to be able to manage the emergency, for example the arrival of a cruise ship today, have been allowed to go ahead as planned.

The OS 35 collided with LNG tanker Adam LNG in the Port of Gibraltar on 29 August as it was manoeuvring to exit. Although the tanker only suffered minor damage, the OS 35 was making water at the bow and was directed to a location off Catalan Bay to beach and prevent it from sinking. The bow went underwater and is resting on the seabed. The vessel is sitting 700 metres off the shoreline of Catalan Bay.

Divers found a ten by four-metre gash on the starboard side of the vessel. The OS 35 was carrying 24 crew who were all evacuated when the hull broke on Wednesday. The two sections of the vessel have not yet fully separated. Before the heavy fuel oil spill reported now, a leak of hydraulic fluid from the vessel’s forward crane occurred. A second spill of lube oil occurred when the vessel broke.

The port has declared a Major Incident to free resources and port operations have been suspended.

The bulk carrier OS 35 measures 178 x 28 metres and was built in 1999. It sails under the Tuvalu flag and is operated by Old Stone Management Ltd, managed from Pireus in Greece. The P&I Club of the vessel is QBE Europe SA/NV. QBE have agreed terms with and appointed Resolve Marine Services (Gibraltar) Ltd as the salvors of the vessel.

Picture (top) by Government of Gibraltar.