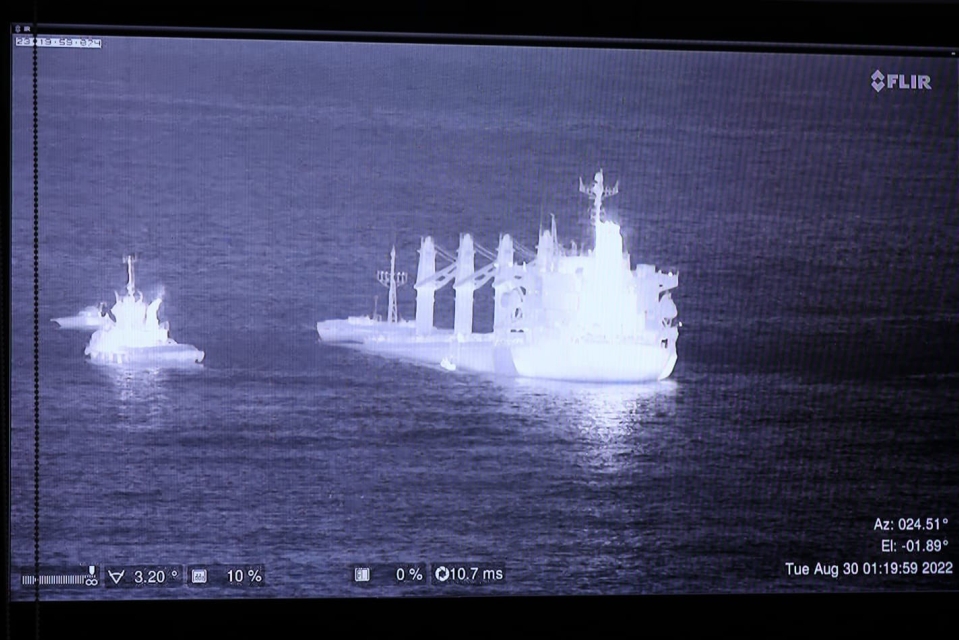 Bulk carrier OS 35 collided with LNG tanker Adam LNG in the Port of Gibraltar on 29 August as it was manoeuvring to exit. Although the tanker only suffered minor damage, the OS 35 was making water at the bow and was directed to a location off Catalan Bay to beach and prevent it from sinking.

The Government of Gibraltar says no-one was injured in the collision or the subsequent grounding of the vessel. The OS 35 is carrying 24 crew, all of which are currently still on board, at the request of the captain of the vessel.

The vessel is beached just over 200 metres off Catalan Bay. The bow of the vessel is resting on the seabed in 17 metres of water, listing only by three degrees to starboard. This morning, the Gibraltar Port Authority (GPA) stated that the vessel has remained stable overnight without any significant developments.

A notice to mariners has been issued by the GPA with a 200-metre exclusion zone already in place around the OS 35. Although port operations were suspended by the GPA during the initial stages of the operation for approximately four hours yesterday, the port is now fully open.

400 metres of boom at the ready

The Port Authority remains at the scene with assets available should an evacuation become necessary. Approximately 400 metres of boom are readily available for deployment around the vessel in the event of an oil spill.

This morning, a dive team will carry out an underwater inspection.

The OS 35 sails under the Tuvalu flag and is loaded with steel rebars. The ship is loaded with 183 tonnes of heavy fuel oil, 250 tonnes of diesel and 27 tonnes of lube oil and was leaving Gibraltar to head to Vlissingen in the Netherlands.

The Government of Gibraltar released an update this afternoon after inspecting the damage to both vessels:

A survey inspection by a specialist team of divers this morning has confirmed that the OS 35’s bulbous bow is currently submerged 1.2 metres into the sandy seabed. There is significant damage to the vessel’s starboard side, including a gash amidships, below the waterline, measuring approximately 10 metres by 4 metres.

The vessel Adam LNG appears to have suffered no significant damage, except for a superficial dent to its bulbous bow. No injuries have been reported among the crew and there has been no water ingress. This has been confirmed by divers and by an internal survey.

A specialist team of marine salvors from the Netherlands is due to arrive in Gibraltar early this afternoon to conduct a full on-site assessment immediately on their arrival. The Government is advised that weather conditions are forecast to be good in the coming days, which will assist in operations moving forward.

The Gibraltar Port Authority currently has two tugs and three service craft deployed to the scene, assisted by Salvamento Maritimo, and are ready to react to any incident that may develop.