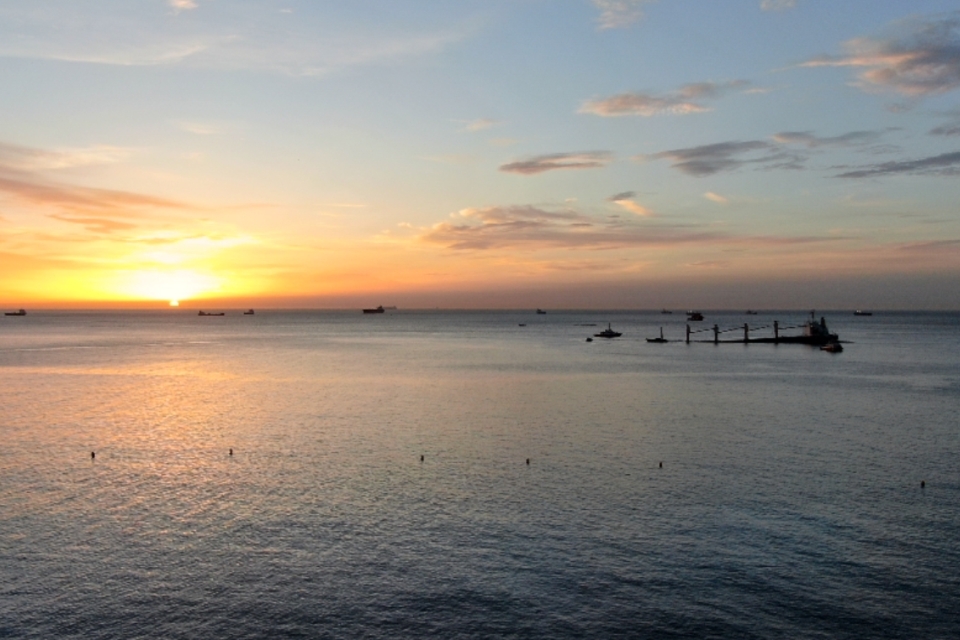 The hull of the bulk carrier OS 35 has broken, but the two sections have not yet fully separated. The vessel had partially sunk after colliding with LNG tanker Adam LNG. There have been some oil spills since Tuesday, which have all been contained so far using booms.

While the salvors were making plans to remove fuel and oil from the vessel by putting a barge alongside as well as to construct a cofferdam to patch up the ten by four-metre gash on the starboard side, the hull of the bulk carrier broke. All persons on board, a total of 24 crew and six surveyors who were on board at the time, have been evacuated safely.

The vessel is sitting 700 metres off the shoreline of Catalan Bay – which differs from initial estimates of 200 metres. This morning, the Government of Gibraltar says that overnight the situation has remained stable. Continuous monitoring has been in place throughout the night. Additional monitoring by drone and land based thermal imaging assets have revealed no significant changes to the situation.

The Salvage team is on board to continue assessing and planning the way forward, and divers will be in attendance shortly to conduct external hull survey.

No fuel removed from vessel yet

According to the Government of Gibraltar, there was a clear risk that the hull would break. It was for this reason that urgent attempts were being made to remove fuel from the vessel, but this has not yet been possible. The vessel carries 215 tonnes of heavy fuel oil (approximately 32 tonnes more than previously stated), 250 tonnes of diesel fuel and 27 tonnes of lube oil.

Meanwhile, the Port of Gibraltar has declared a Major Incident (MAJAX) to allow for all available resources to be directed to dealing with the emergency. All other day-to-day operations at Gibraltar Port have been stopped to ensure availability of resources. Right now, all Gibraltar Port Authority service craft are on standby. The salvage master has been authorised by the Captain of the Port to re-board the vessel to gather facts, together with the P&I on-scene commander.

So far there have been two oil spills, both of them contained using booms. On Tuesday, the Gibraltar Port Authority responded to a leak of hydraulic fluid from the vessel’s forward crane, which is the only one of the four cranes aboard the vessel affected by water ingress so far. A sea boom was deployed around the vessel to contain any pollution. An additional absorbent boom has been deployed to surround the crane structure, in order to minimise seepage at the source and to contain and collect the fluid to prevent further leeching to sea.

There has also been a substance leak from the vessel as a result of the movement arising from its break. Initial investigations indicate that this is lube oil. This lube oil is currently contained within the primary boom and all efforts will be made to remove it from the sea using a skimmer and sludge barge before it is able to leak from within the boom.

All booms at the GPA’s disposal have been mobilised with two vessels deployed in U formations with booms to start corralling any oil that might spill from the vessel and that might leak from the primary boom. An additional boom will be deployed along the coastline that is at risk of direct impact. The salvage master has confirmed to the Captain of the Port that all fuel valves were isolated before the break occurred.

The Gibraltar Port Authority has activated its retainer with Oil Spill Response Limited (OSRL) to deal with any spills. OSRL is a UK established, non-profit entity set up by BP, with support from other oil companies, in the aftermath of oil spill disasters. It is established to lead in the best practices to deal with oil spills or the risks of them.

The original plans were to berth a bunker barge alongside the OS 35 to begin the offloading of low sulphur fuel oil, diesel and lube oil. It is not yet clear if these plans will be altered now that the hull has broken. It would take approximately fifty hours of pumping to remove all fuel.

The same is also true for constructing a cofferdam, which would take several weeks to make. The breaking of the hull may require a new plan.

The bulk carrier OS 35 measures 178 x 28 metres and was built in 1999. It sails under the Tuvalu flag and is operated by Old Stone Management Ltd, managed from Pireus in Greece. The P&I Club of the vessel is QBE Europe SA/NV. QBE have agreed terms with and appointed Resolve Marine Services (Gibraltar) Ltd as the salvors of the vessel.

Having determined that the other vessel involved in the collision, LNG tanker Adam LNG, has suffered no damage that render it unable to proceed on its voyage, and having already provided statements for the ongoing investigation into the collision as required by the Captain of the Port, the vessel has been cleared to depart Gibraltar.