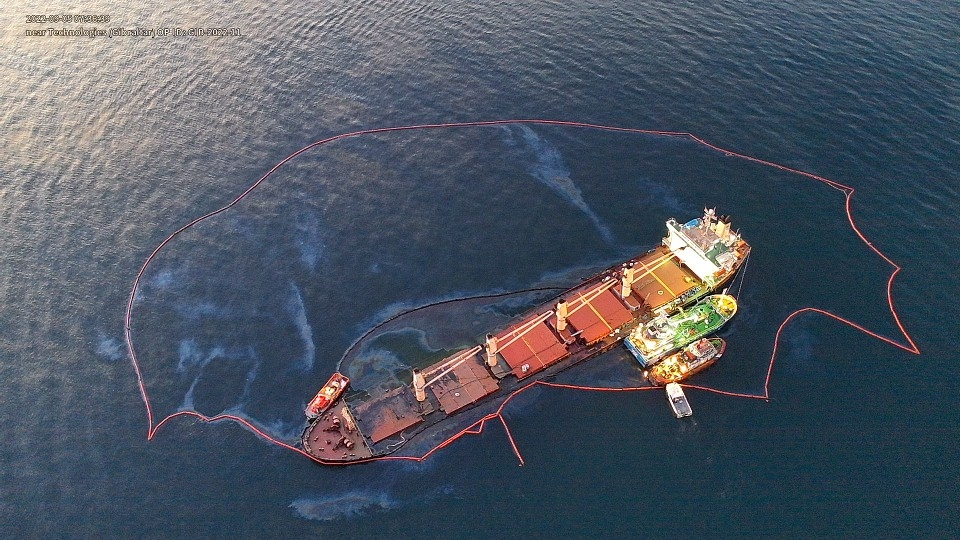 Pumping operations to reduce the amount of oil on board the bulk carrier OS 35, which partially sank after colliding with an LNG tanker, are still ongoing. The cause of water ingress into the engine room has been found and solved as well as of cargo hold 5. High winds are affecting the oil spill booms and some oil has reached several beaches. An investigation into the accident is already underway.

On Wednesday, the hull broke, but the two parts have not yet fully separated. The vessel is sitting 700 metres off the shoreline of Catalan Bay.

The operation will thereafter move very slowly and carefully to begin to pump fuel out of tank 1 centre port and tank 1 port. The expectation is that both of these parts of tank 1 will contain very small amounts of fuel.

Once the tests, pumping checks and operations on tank 1 are complete, an operation will revisit tank 2 to attempt to eliminate any remaining fuel that was previously unreachable until the maximum amount of fuel residue is removed to the extent that it is possible. It is expected that this will be a slow process.

Operations lastly concentrated on engine room lub tanks, all of which have now been pumped out. More detail on the total amounts pumped from the various tanks aboard the vessel is to be revealed later today.

On Saturday (3 September) water ingress was discovered in the OS 35’s engine room. As a result, the vessel’s own systems could no longer be used to pump fuel out and independent, off-ship systems had to be deployed.

Investigations into the cause of the water ingress found a manhole had not been totally sealed. The stress on the hull caused the keel duct to flood and water then seeped into the manhole and then the engine room. This has now been sealed and there is no longer a need for continuous pumping of water out of the engine room, although some minor ingress continues to drip in. The situation in the engine room is now stable and under control.

Leak patched up in cargo hold 5

Given the circumstances that have arisen in respect of the flooding of the engine room, water has been also pumped out of cargo hold 5 to add to the buoyancy of the aft section of the vessel in an attempt to mitigate the impact of the leak on the structural integrity of the vessel.

Dive teams located the leak to cargo hold 5 and believe that they have now successfully patched it.

Operations have also commenced, in parallel to oil pumping operations, to clear the OS 35 of any potential additional future contaminants including chemicals, paint and soft furnishings, in preparation for any bad weather that may be experienced in the coming weeks, which could lead to any such contaminants escaping the vessel and any booms set up around it.

Salvage teams are going section by section and locker to locker to remove as much of the vessel’s contents as possible whilst weather conditions are favourable.

High wind conditions have created difficulties for the response teams on site, and have particularly affected booms. The second boom around the vessel has been displaced, but not damaged. So far, the second boom has been effective at containing most of the sheen that escapes the first boom. Yet, the Government of Gibraltar says booms are not hermetic and can never fully contain polluting contaminants within them.

The boom at Catalan Bay has also been displaced with some parts of the boom reaching shore. Works to tackle this are ongoing. A new boom has been deployed at the entrance to Sandy Bay.

Yesterday, the drum skimmer had removed at least 5000 litres of fuel from inside boom 1 since Saturday night, and continues to tackle fuel concentrations on the side of the hull. A second skimmer collected an additional 12,000 litres of fuel on Saturday also from within boom 1.

Reports from Salvamento Maritimo overflights indicate that the bay is clear of oiling or free-floating sheening. The situation on the east side with regards to free floating sheen and oil has also improved significantly, although there continue to be some patches in the area.

The authorities have decided to deploy catamaran Horizon, which they say is proving very effective at skimming free-floating sheen and can be operational 24/7. Unfortunately, it suffered an onboard malfunction yesterday and needed to return to port for some hours to repair.

One J formation boom remained on site on the eastside overnight, guided by infrared cameras to collate and contain sheening from the secondary boom. There is no indication of new arrival of oil on the shoreline.

Sunday’s cleanup of the shoreline, organised by the Department of the Environment in conjunction with local NGOs and volunteers, was successful in removing some of the oily patches on Gibraltar’s beaches. Patches of thick oil have been found at Gorham’s Cave. These will be assessed today by specialist staff from Oil Spill Response Limited (OSRL).

The Department of the Environment report the presence of some oily material on northern end of Rosia Bay that will also be tackled.

The following beaches have been impacted:

No oil has been reported on Eastern and Western beach.

The Gibraltar Maritime Accident Investigation Compliance Officer has appointed an independent accident investigator from the UK under the Gibraltar Merchant Shipping (Accident Reporting and Investigation) Regulations 2012, to carry out an investigation into the collision of the bulk carrier OS 35 and the vessel Adam LNG.

The investigator arrived in Gibraltar on Friday and is already examining evidence that has been provided to him.

The sole objective of the investigation under the said Regulations is the prevention of future accidents through ascertainment of its causes and circumstances. The investigator’s report will endeavour to analyse the relevant safety issues pertaining to the accident and to make recommendations aimed at preventing similar accidents in the future.

Pictures by the Government of Gibraltar.