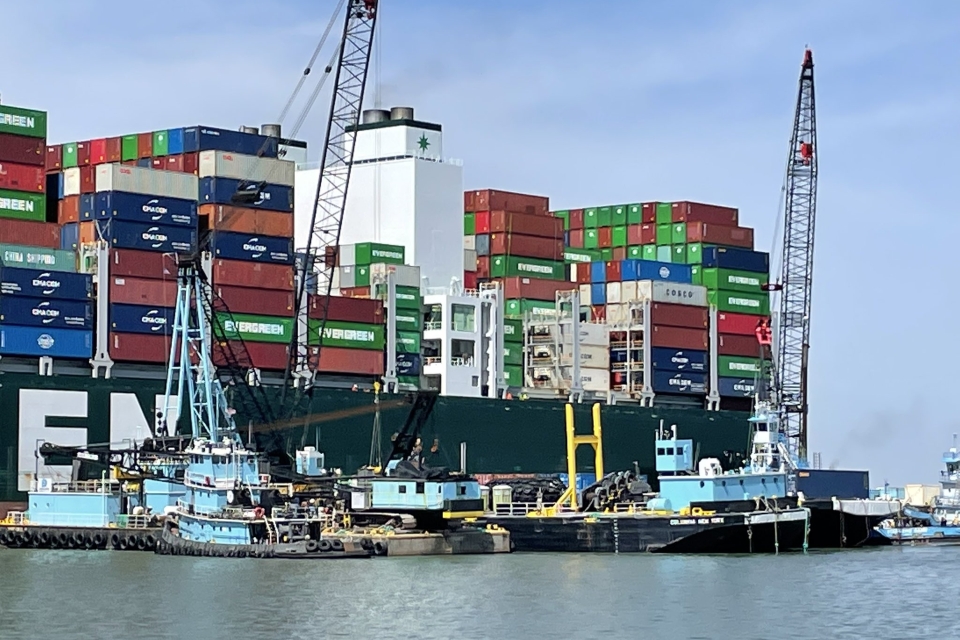 Yesterday morning, a total of 180 containers had been removed from the grounded 11,850 TEU container ship Ever Forward. The US Coast Guard expects container removal operations to be concluded on or about Friday, April 15. In anticipation of a new refloat attempt, the Coast Guard has expanded the safety zone around the vessel from 500 to 1000 yards.

Port of Baltimore director William Doyle reported favourable weather conditions over the past few days have resulted in the unloading of containers ticking up. Doyle said he was expecting another 100 containers would be removed in the course of Wednesday, 13 April. A total of about 500 containers will be removed from the container ship that has sat grounded in Chesapeake Bay since 13 March before a new refloat attempt will take place.

Initially, a third refloat attempt would take place once dredging around the vessel to a depth of 43 feet (over 13 metres) was completed. The salvors involved felt, however, that dredging alone would not be enough to pull the vessel free and decided to proceed with removing containers. So far, over 160,500 cubic metres of soil have been dredged from around the vessel.

Also read: 500 containers to be removed from grounded container ship Ever Forward

The US Coast Guard had established a 500-yard (about 457 metres) temporary safety zone around the Ever Forward for the salvage operations. Yesterday evening (local time), this zone was expanded to 1000 yards, which will remain in place until 12 May ahead of pulling evolutions following container removal operations, the US Coast Guard said.

A date for the new refloat attempt has not yet been announced.

Picture by the William Doyle.