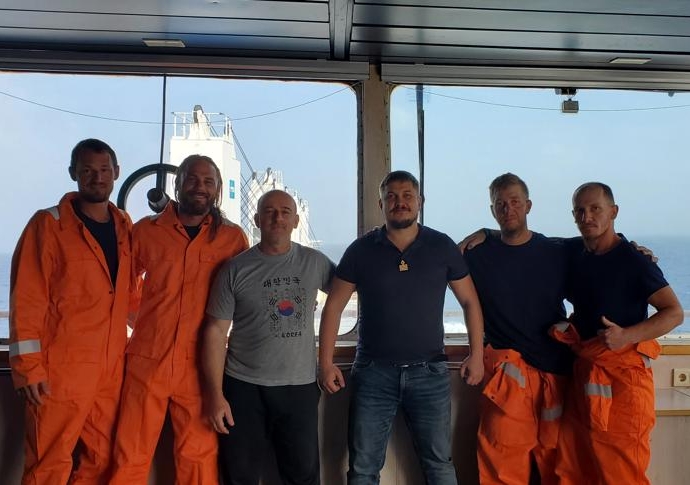 On 28 December, the crew of the bulk carrier Hanze Göteborg rescued four American rowers in the middle of the North Atlantic. The men had been participating in a cross-Atlantic rowing race when their vessel capsized and they had to get into a liferaft.

Responding adequately to a very weak Mayday signal, captain Yevhenii Feshchenko ordered his crew to launch a “Search and Rescue” operation at 6.25 pm. The distance to the distress signal at that time was about ten nautical miles (18 km).

Despite the very poor connection, the Hanze Göteborg was able to make contact with the party in distress and determine its approximate position. After more than two hours of searching, eventually in darkness, the crew managed to sight the liferaft, in which the rowers were.

‘It is a miracle that the crew found the liferaft,’ says Peter Dekker, managing director of Hanzevast Shipping. ‘At the time, the weather was very bad with strong winds, high waves and a swell of at least 4 metres high. The men were incredibly lucky.’

After the 180-metre Hanze Göteborg managed to manoeuvre alongside the 4 m2 raft in rough seas in the dark, the four men were able to be rescued from the raft via a Jacob’s ladder. They had then spent 22 hours drifting rudderless on the ocean. Immediately after rescuing the last person on board, the half-flooded liferaft sank.

Once on board the ms Hanze Göteborg, they were medically examined and given warm clothes and food, as well as a phone to contact their families.

The men had left La Gomera (Canary Islands) on 12 December for a crossing of the Atlantic Ocean along with about thirty rowboats. Final destination was the island of Antigua in the Caribbean. These boats, with one to five participants from different countries on board, including the Netherlands, are all taking part in the so-called “Talisker Whisky Atlantic Challenge”, a rowing race over 3000 nautical miles (4800 km). Average duration of the crossing is forty days.

In the early morning of 28 December, their rowing boat the Moody had capsized due to a high wave, after which the crew proved unable to right the boat. They were therefore forced to use the liferaft.

The Hanze Göteborg, a handysize bulk carrier of 35,000 DWT, sails under the Dutch flag and has Groningen as its home port. It left Mozambique on 5 December with 25,000 tonnes of Ilmenite sand on board. The ship’s final destination is Contrecoeur in Canada, where it is expected on 8 January.