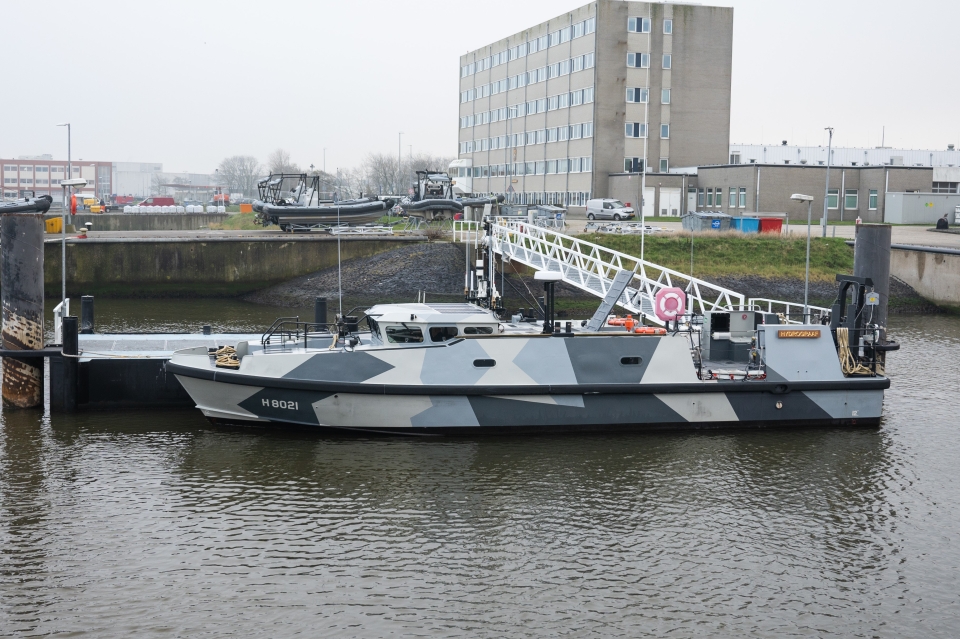 Despite its camouflage colours, the Royal Netherlands Navy has a striking new addition to the fleet. The Damen-built Expeditionary Survey Boat (ESB) Hydrograaf is now operational.

The Defence Materiel Organisation (DMO) handed over the advanced mini-hydrographic survey boat to the Dutch navy on 21 November. The ESB is named after HNLMS Hydrograaf, which carried out hydrographic work for the navy between 1910 and 1962.

The name also refers to its main task. Hydrograaf is equipped with the most advanced hydrographic, navigation and communication systems. These allow the ship to accurately map waters, ports and fairways. It can do so quickly, thanks to its sophisticated design and modern sensors. Due to its shallow draught, the vessel can carry out work close to shore.

With a crew of four, the ESB can operate independently for 72 hours, up to 100 nautical miles from the mother ship. These features make the ESB a valuable addition to the two large hydrographic survey vessels, HNLMS Snellius and Luymes. In particular, when conducting hydrographic surveys in support of military operations.

When building the Hydrograaf, builder Damen Shipyards Den Helder always had to pay attention to size and weight. After all, the vessel had to be lifted from the water with the cranes of HNLMS Karel Doorman and Johan de Witt for transport. The dimensions demanded meant there was little room for the engines, wheelhouse and accommodation.

In the end, after careful weighing of all parts, the shipyard managed to get all this and all the equipment inside and keep the ESB under 24 tonnes.