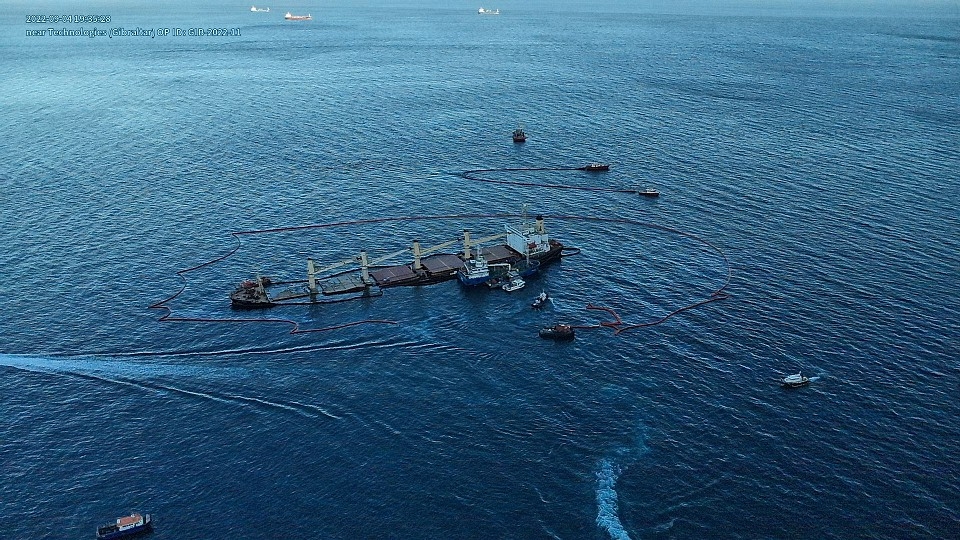 The bulk carrier OS 35, which remains grounded in Gibraltar, withstood the bad weather of the past few days well. The aft of the vessel was lowered onto the sea bed after fears for its structural integrity in worsening weather conditions. This plan has worked well. However, there has been increased sheening.

With the weather expected tp become rough over the weekend, the salvor decided to lower the aft of vessel, which went as planned. As of Saturday morning, the OS 35 is secure on the sandy sea bed, putting it in the best position to withstand adverse weather conditions and for recovery operations going forward.

The boom around the vessel was removed as planned. The current swell action around the vessel means that replacing the boom is not possible at present. Its redeployment is under constant review so that it may be replaced at the earliest safe opportunity.

The GPA monitored the situation around the OS 35 continuously over the long weekend. As had been expected, some light sheening from residual fuel was experienced on Sunday and Monday, as well as the release of very minor debris. Most of the sheening was broken up by the weather, and to further minimise any impact, the Gibraltar Port Authority deployed assets and will ramp up the response as the swell subsides.

Although it remains light, sheening was more extensive Tuesday morning (20 September). The Port Authority has deployed additional vessels to begin tackling this and has stopped all port operations that involve launches in order to concentrate all available resources on clean-up operations.

At the request of the Captain of the Port of Gibraltar, the Deputy Captain of the Port of Algeciras has deployed assets to the area of Europa Point, to tackle any sheen that is moving towards the bay. At present, there is no free-floating thick oil seeping from the vessel or in its immediate area and no beaches are impacted by oiling.

The Department of the Environment, together with Oil Spill Response Limited (OSRL), continue to conduct daily shoreline assessments with a view to mobilising clean-up operations as soon as may be necessary.

Boom back in place and cleanup at Seven Sisters

The boom has been replaced around the vessel and continues to reduce the amount of free-floating oil that is able to escape. Vessels deployed by Spanish authorities are at the northern end of Eastern Beach and at Europa Point to prevent as much as possible the movement of oil towards the Spanish eastside coastline and into the bay.

The Gibraltar Port Authority have suspended all bunkering operations in order to focus all resources on the cleanup effort. Assets will remain on site through the night with boom deployed in J formation with sorbent pads, to mitigate the impact of oil that escapes overnight.

The Department of the Environment’s priority on Wednesday (21 September) has been the assessment and mobilisation of cleanup operations at Seven Sisters, which is heavily soiled with oil. Teams from the Department of the Environment, the Gibraltar Port Authority and OSRL have been deployed to the area to explore all options to clean the area as quickly and as effectively as possible.

Unfortunately, due to the nature of the oil, attempts to skim have been unsuccessful. A vessel is attempting to disperse the oil away from the Seven Sisters site through backwash methods. Seven Sisters will remain the priority for cleanup operations over the coming days.