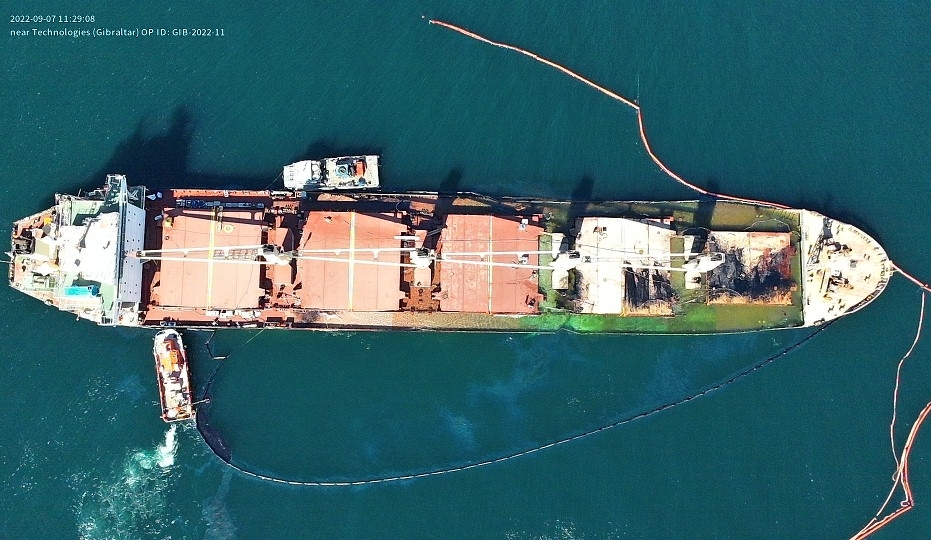 Adverse weather conditions that are forecast for Sunday and Monday are such that they may affect the structural integrity of the OS 35. The Gibraltar Port Authority and the salvors, Resolve, are exploring all realistic options to minimise pollution that may be caused as an inevitable result of this weather.

On Wednesday, 31 August, the hull broke, but the two parts have not yet fully separated. The vessel is sitting 700 metres off the shoreline of Catalan Bay. Since then, salvors have been busy removing fuel oil and diesel oil from the vessel as well as as much of the rest of the inventory as possible. The accident has resulted in several oil spills, with some oil also reaching the shorelines. Booms and a catamaran that can skim the ocean surface have been deployed to catch as much of the oil as possible.

Booms to be removed during bad weather

The containment booms that surround the OS 35 are currently dirty and soiled, and are now themselves a source of sheening. The outer boom will be replaced with a clean one. In periods of adverse weather, the booms will be removed, as they will be ineffective and may break up and themselves cause pollution.

The bathing season has come to an end and beaches are no longer under continuous lifeguard supervision. Booms at beaches will be removed in advance of adverse weather conditions in order to prevent them from breaking up and thereby becoming a further source of debris and contamination. The public should be aware that adverse weather conditions may result in pollution from the OS 35 making its way onto the shores of Gibraltar’s beaches.

As previously advised by the Captain of the Port, there are still expected to be pockets of unrecoverable, unpumpable fuel residues onboard the vessel that are and will continue to be an ongoing source of sheening. This was expected and is unpreventable. In the event of adverse weather, it is realistic to expect that these may release.

There is a likelihood that swells will push some of this fuel towards the shoreline.

The Captain of the Port and Government of Gibraltar Departments and Agencies are working to mitigate the effects of adverse weather conditions as far as possible. Further details of these plans will be publicised in coming days.

The Gibraltar Port and the Department of Environment will conduct monitoring operations throughout adverse weather conditions in order to mobilise response and clean-up operations as soon as they are possible and viable.

On Friday, the salvors decided to lower the aft of the vessel to allow the OS 35 to settle overnight securely on the sandy sea bed, putting it in the best position to withstand adverse weather conditions and for recovery operations going forward. The booms surrounding the vessel would be removed on Saturday in order to allow any residues that escape as part of the settling process of the vessel to be contained and collected as far as possible. The booms at beaches were already removed by Friday.