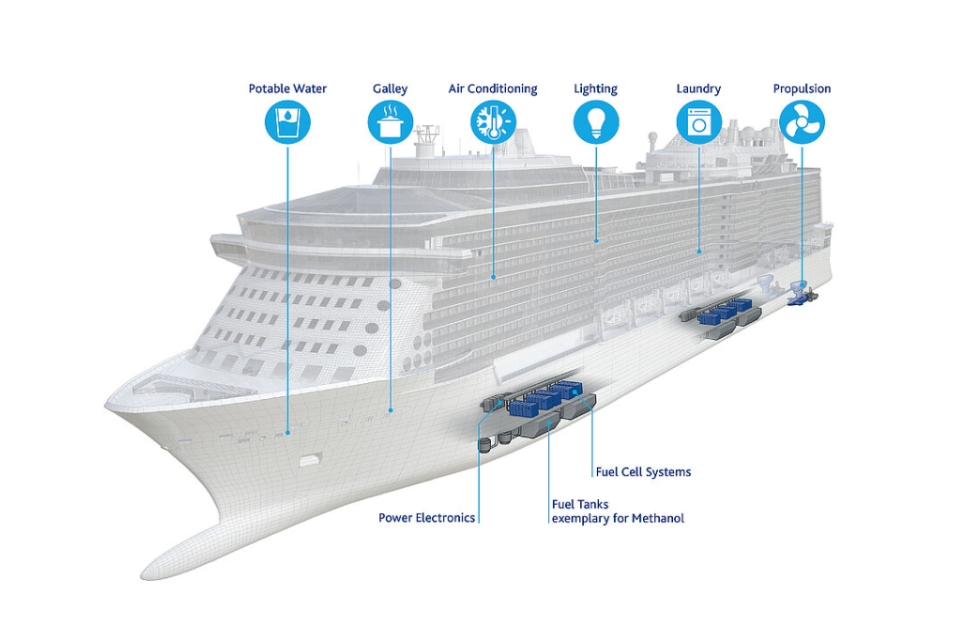 Route flexibility and ranges of more than 5000 nautical miles are basic requirements of the world’s maritime fleet. Purely battery-electric solutions are often out of the question for these deep-sea applications due to their high weight and space requirements. Hydrogen as a direct energy storage medium is also ruled out, as its low volumetric energy density would require it to be stored in huge hydrogen tanks in a cryogenic or highly compressed state.

However, according to Freudenberg, fuel cells have tremendous advantages due to their high efficiency and low maintenance requirements. Therefore, it makes sense to chemically bind regeneratively produced hydrogen to achieve a significantly higher energy density. This will make fuel cells economically and practically viable for ocean-going shipping. The fuel cell system can also be combined with maritime battery systems to create particularly efficient hybrid solutions.

In this context, the use of climate-neutral methanol represents a turning point on the road to maritime sustainability, says Freudenberg. Methanol is a simple alcohol that is liquid under normal ambient conditions and has around three times the volumetric energy density of liquefied hydrogen.

As an important raw material for the chemical industry, climate-neutral methanol is characterised by proven manufacturing processes as well as good availability.

Freudenberg e-Power Systems has developed an innovative approach to using methanol for marine applications. This combines methanol reforming technology with a PEM fuel cell in a modular, scalable system unit. It generates hydrogen via steam reforming, which then reacts with oxygen from the air in the fuel cell to produce the electrical energy needed for both propulsion and the ship’s electrical system.

The heat required for the reformer can be obtained directly from the waste heat of the fuel cells. Fuel cell stack, reformer and control electronics as well as all components for media supply are located in a prefabricated, modular unit. This containment design facilitates easy installation on board.

The safety concept of this innovative system architecture has now received type approval from RINA. This confirms the safety of the system and its conformity with maritime standards and regulations.

Heavy-duty at the cell level

Freudenberg e-Power Systems is convinced that the best heavy-duty solutions start at the cell level. The special material configuration of the bipolar plates (BPP) and the membrane electrode unit as well as deep value creation, for example through in-house catalyst production, ensure maximum efficiency and durability. Unlike conventional fuel cell systems, which have their origins in the passenger car sector, the design strategy of Freudenberg’s high-performance stacks is geared to achieving high efficiency combined with a long service life.

In addition, the company’s methanol-powered fuel cell system offers further advantages since – unlike drives with combustion technology – it does not emit any harmful nitrogen oxides.

The safety concept was already tested for maritime conformity in an early phase of the “Pa-X-ell 2” research project. For this purpose, it received approval in principle from the classification society DNV.

In addition to the focus on the safety concept, the topics of modularisation and standardisation were considered in order to take account of the aspects of large-scale industrialisation from the very beginning. In the future, system units with a respective nominal output of 500 kW are to be combined into total capacities in the double-digit megawatt range.