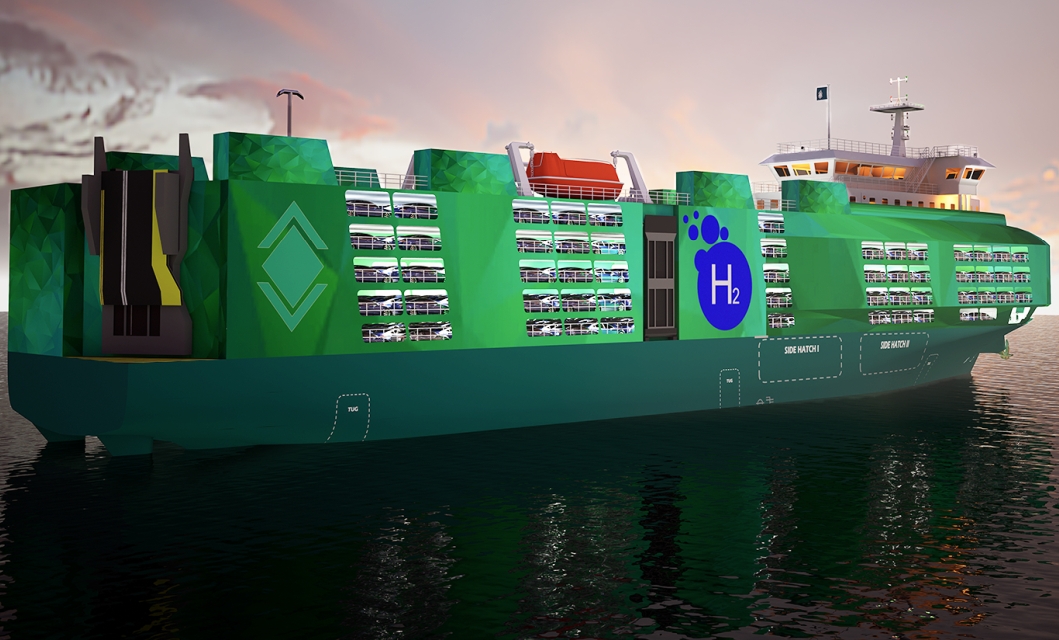 Aurelia Green Ship Concept Design has unveiled a new design with 100 per cent hydrogen propulsion. The ACD01 1000, a RoRo vessel, features electric propulsion using highly compressed H2 as fuel. RINA has issued an approval in principle for the design.

The certificate of approval in principle has been issued by RINA based on the newly published RINA Rules for Hydrogen Fuelled Ships and the RINA Guide for the Approval in Principle of Novel Technologies.

The ship’s hydrogen-based engine system is said to be suitable for application to other ship designs.

The fuel to operate the vessel is 100 per cent compressed hydrogen, which generates no environmentally harmful emissions with a design that can be considered as zero-emission not only in port, but also during navigation. The hybrid propulsion is based on battery and fuel cell power modules and it is not supported by internal combustion engines supplied by petroleum-based conventional fuels. The batteries are used as an energy storage source to supply power for the hotel load too.

Furthermore, the new design complies well beyond the limits set by EEDI Phase 3 according to MEPC.203(62), the ballast water treatment plant is in accordance with the latest amendments of the International Ballast Water Management Convention and the hull is designed to ensure excellent hydrodynamic and maximum propeller efficiency.

Ton Bos, partner, and co-founder of Aurelia comments: ‘The world of zero emissions is a pioneering world open to new opportunities, which to some extent reminds me of the first operations in the heavy-lift sector, where there was also no experience yet. In this sense, the cooperation with RINA is a strong signal that the maritime world is ready to work together for clean shipping.’

‘This new design for a compressed hydrogen ro-ro is part of a long-term cooperation between Aurelia and RINA in which we will develop liquefied hydrogen propulsion systems that could be used for heavy-lift, cruise and RoPax vessels,’ Raffaele Frontera, founding partner of Aurelia Green Concept Design, adds. ‘This cooperation with RINA will ensure that the design of renewable ships becomes a reality and does not remain a distant dream.’

Aurelia is a start-up with offices in the Netherlands, Italy and Argentina. The company wants to influence the maritime world by proposing zero-emission ships, introducing a new way of designing vessels starting from operational knowledge.