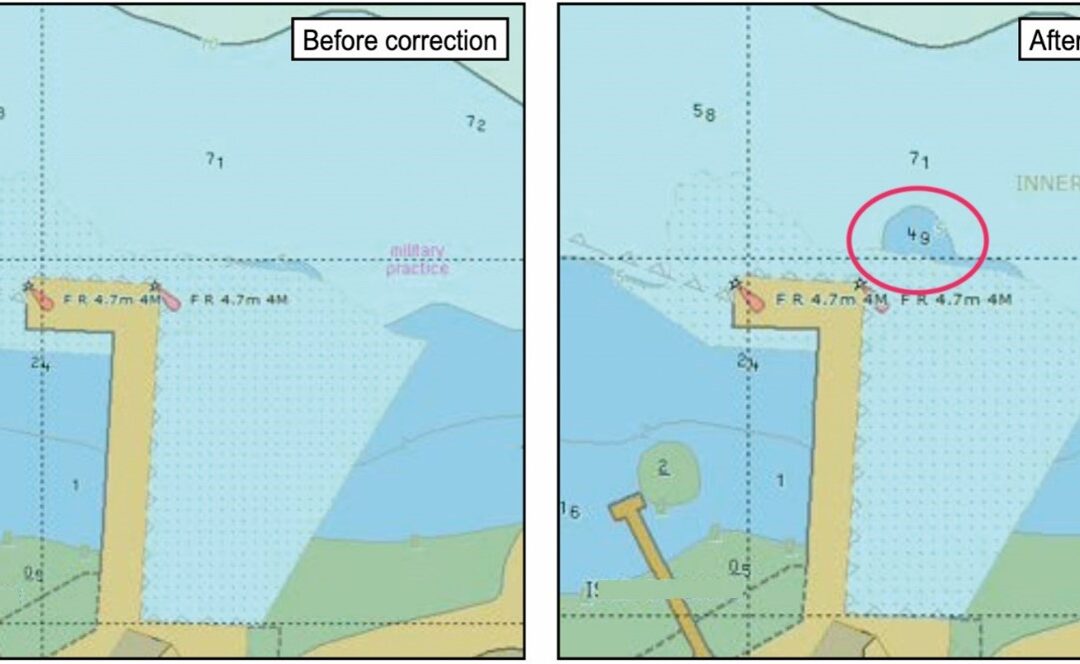 Critical under keel clearance is a scenario that calls for extra care. The Nautical Institute gives this warning in its latest Mars Report in which a tanker hit a charted shoal damaging a ballast water tank.

A chemical carrier was inbound for a port in good visibility and weather conditions. This was the first time the master and officer of the watch (OOW) had entered this particular port.

In preparing the passage plan, slack water had been chosen as a time best suited to berth as the tidal stream would be minimal. Low water was predicted to be at 1515 with a height of 1.1 metres, and the plan was to arrive around this time. The next daylight slack water was just over nineteen hours later at high tide with a height of 4.7 metres.

In the final approach, the OOW advised the master of a 4.9-metre charted depth just north of the pier. Since the state of the tide was low at 1.1 metres and the vessel was drawing 6.2 metres aft, this meant they would touch bottom if they passed over this charted depth. The master responded that the echo sounder was reading 7.0 metres of water, so he was content to proceed with the berthing.

As the vessel approached, now 50 metres north of the pier, there was a sudden shudder throughout the ship. The bow swung to the south and the vessel came to a stop. After several attempts to clear the vessel, the master succeeded and, with the now rising tide, they berthed under their own power.

It was found that No. 5 main ballast tank was experiencing an ingress of water, so the ballast pumps were started to control the flooding.

The investigation found that the 4.9-metre charted depth, 50 metres north of the pier, was brought to the attention of the master while preparing the passage plan. Such a shoal would prevent the vessel from safely berthing at low water. The ECDIS ENC data was compared with the local survey chart and a photocopy extract of the Admiralty chart provided by the agent, neither of which showed the 4.9-metre feature. Reasoning that latter data was more recent, the master directed the passage plan to be completed ignoring the 4.9-metre charted depth on the ENC.

As it transpired, neither the master nor the officer had checked the update status of the ENC as part of the planning process. Both were unaware that the 4.9-metre obstruction was a recent correction dated only eight days before the grounding. It was, in the end, more recent and accurate than the agent’s pre-arrival information.

Picture (top): Both the master and OOW were unaware that the 4.9-metre obstruction was a recent correction dated only eight days before the grounding.

This accident was covered in the Mars Reports, originally published as Mars 202221, that are part of Report Number 355. A selection of this Report was also published in SWZ|Maritime’s June 2022 issue. The Nautical Institute compiles these reports to help prevent maritime accidents. That is why they are also published on SWZ|Maritime’s website.