Container ship Ever Given grounding: Could it happen again? 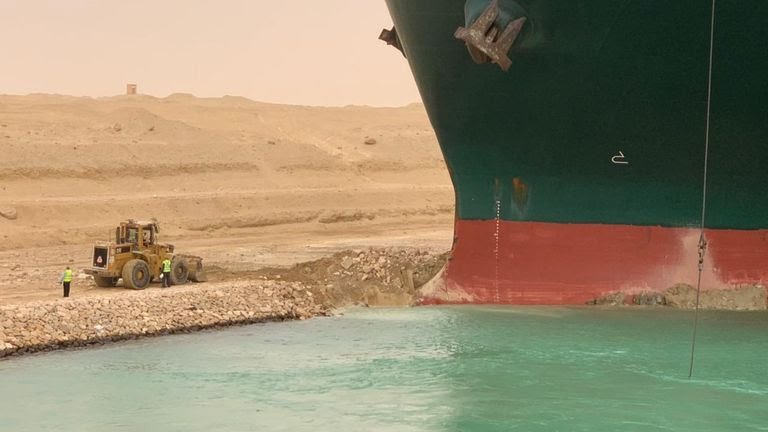 Asking the question is answering it and Murphy’s law supports it. Could we make the Ever Given grounding in the Suez Canal a rare event? Understanding what likely happened would be the first step. Relevant factors include sailing in shallow water, wind and bank suction.

The following considerations are not based upon any detailed information on the incident itself other than the information on the canal and the vessel at hand and surely is not intended as a final conclusion on what has happened.

Ultra Large Container Carriers are a relatively new phenomenon. The movement of these vessels in canals and harbour basins led to a number of studies for the Maasvlakte II (Port of Rotterdam). Both on wind loads and safe navigation. More in particular, the studies addressed the effects of channel blockage (much of the channel cross section is occupied by the hull itself) and potential lack of heading control. In port approaches or transit channels, ships often sail in shallow water and nearby banks or even moored vessels, pose similar challenges as in the Suez Canal. In particular, the combination with (beam and astern) winds, lowers the margin for error.

Wind and keeping the right heading

A vessel sailing in beam winds requires a drift angle to counteract the wind forces and consequently increases its “swept path”. For large container vessels, these drift angles can be as much as ten degrees. This easily doubles the swept path and brings, in case of the Suez Canal, the bow and the stern above the slope of the banks.

It is easy to understand that the steering of a vessel is more challenging when visually, due to this drift angle, it seems to collide with the bank. Channel pilots are often trained to deal with this situation. Immediately prior to the grounding of mv. Ever Given, no serious beam winds were experienced.

Also read: Suez Canal Authority: Wind not main cause of container ship Ever Given grounding

A second challenge due to the wind comes with the lack of course stability of some vessels when sailing in winds more from astern. They then require continuous steering to keep the vessel on the intended heading, whereas a stable vessel naturally tends to continue on its actual heading. At the channel entrance, shortly before grounding, the vessel experienced some astern wind conditions. See the video below.

As mentioned, shallow water and nearby banks pose other challenges. First of all, a relatively high speed of the vessel in the channel (normally about nine knots, now even over thirteen knots) causes a significant squat (sinkage), which effectively changes the manoeuvring characteristics likely for the worse, but essentially become unpredictable due to the shallow water and the increased blockage effects.

Secondly, bank (suction) effects when sailing closer to one bank than the other could have played a role. These effects increase with increasing speed and introduce a force pulling the vessel to the nearby bank and introduce moments that further disturb the normally experienced manoeuvring properties. This altogether, perhaps with some additional wind effects, seriously complicates the heading control.

So could it happen again? Sure, these channels are really narrow when compared with the size of these vessels. Could it be rare events (like they are)? Sure, if careful navigation (slow speed, situational aware), sufficient training and mitigating measures are in place.