Not challenging the pilot leads to passenger vessel grounding 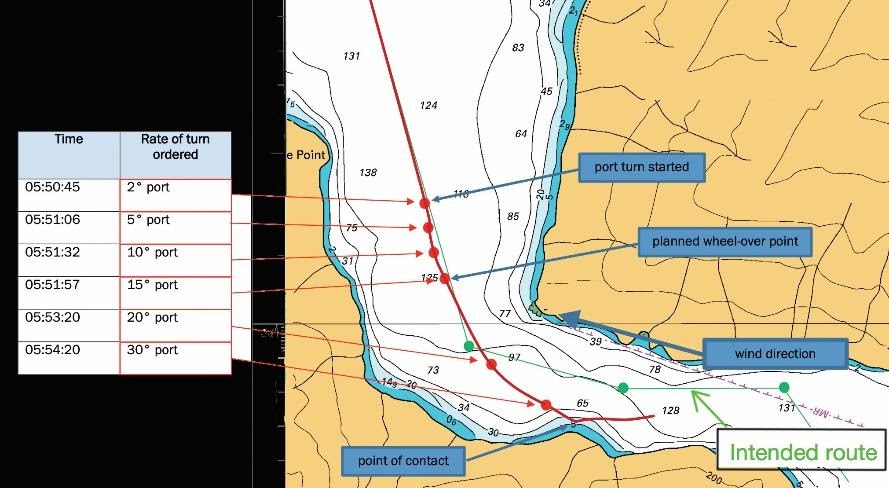 Bridge resource management (BRM) still often appears to be but a theoretical concept in the maritime industry even after many decades of efforts to change the paradigm. The Nautical Institute says this in its latest Mars report where it discusses a passenger vessel touching rocks where none of the bridge team challenged the pilot as the vessel was running into danger.

In darkness, a pilot boarded a passenger ship to assume the con through a restricted waterway. The pilot discussed the speed and rate of turn (ROT) required with the officer of the watch (OOW). When the master arrived on the bridge the three conducted their information exchange and agreed on the passage plan for the transit. The vessel’s speed was increased to 12 knots, and the pilot took the con.

About fourteen minutes after assuming the con, the pilot ordered a turn to port into the restricted waterway. A 2° rate of turn (ROT) to port was ordered to begin. In the following two and a half minutes the pilot ordered successive increases in the ROT through 5°, 10°, 15° and 20° to port. The vessel was by now well to the south of the intended course. The pilot, realising this, ordered a 30° degree ROT to port.

The vessel was brought to the middle of the channel while the master and the remainder of the bridge team followed a vessel-grounding checklist. While this was happening the pilot continued to con the vessel to a safe anchorage. Inspections confirmed that the hull had not been breached although the dive survey revealed that the vessel’s hull was indented along the starboard side for about 65 metres.

The investigation found, among others, that although the tracks were clearly displayed on all of the bridge equipment, at no time was a challenge voiced to the pilot until it was too late. Also, it is likely that the pilot became overly focused on the ROT thus losing situational awareness of where the ship was, where it was heading, and what other factors were influencing its progress.

This accident was covered in the Mars Reports, originally published as Mars 202118, that are part of Report Number 342. A selection of this Report has also been published in SWZ|Maritime’s May 2021 issue. The Nautical Institute compiles these reports to help prevent maritime accidents. That is why they are also published on SWZ|Maritime’s website.