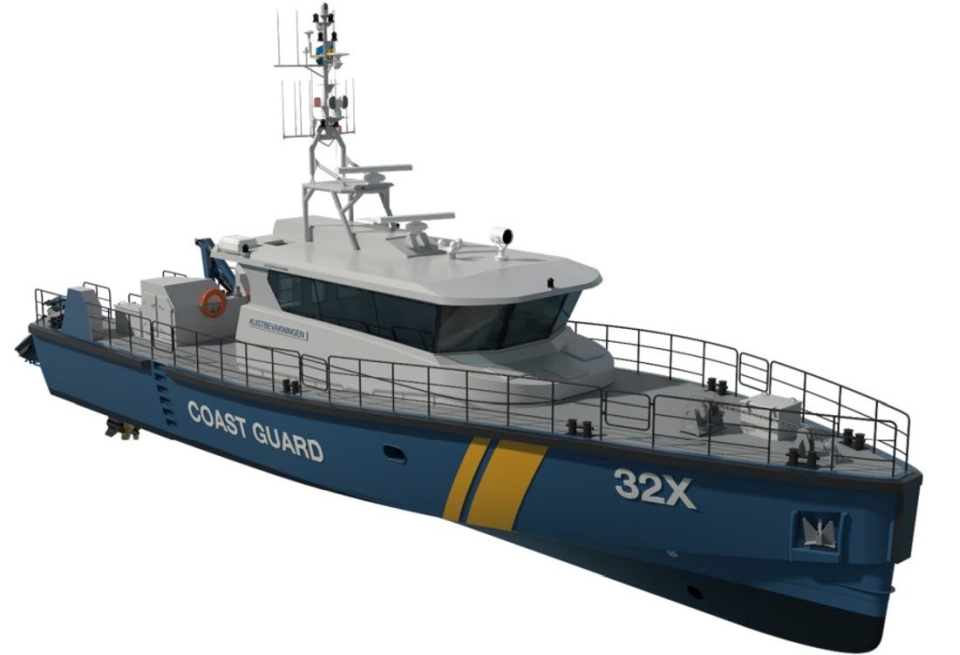 The Swedish Coast Guard has reached an agreement for its next generation of patrol vessels. Damen Shipyards will build and deliver the KBV 320 series, which are expected to enter into service in the latter part of 2024.

The new vessels will replace the KBV 302-KBV 311 series of patrol vessels, which were delivered in 1995. The Swedish Coast Guard does not say how many ships will make up the new KBV 320 series, but the tender documents show the order will be for five vessels with an option for another three.

The KBV 320 vessels will mainly operate close to the coast, with the capacity to carry out tasks at sea as well. They will combine maritime surveillance, which includes control and law enforcement, with environmental rescue and response capabilities to oil spills and other harmful substances.

‘This series of vessels has great capability in a small format, they are more combination vessels than their equivalents today,’ says Henrik Jonsson, Head of the Swedish Coast Guard‘s Equipment and Premises Supply Department. ‘By being able to carry more environmental rescue equipment and having a built-in tank to deal with oil, we can develop the ability to make rapid first interventions.’

The vessel series is designed to reduce energy consumption through advanced construction and design.

‘The Coast Guard’s requirement to maintain a high level of readiness with presence and endurance at sea means that we cannot hybridise operations at present. But the vessels are modern and more efficient in all aspects, which means that their carbon footprint is lower,’ explains Jonsson.

In addition, electricity consumption is expected to be reduced by 35 per cent, while the propulsion system has a lower external environmental impact. Idling is reduced by thirty per cent due to electrically powered hydraulics.

Other innovative solutions include a carbon fibre composite hull, a launching ramp for easier and safer launching of the deck boat, aerodynamic and hydrodynamic solutions to reduce resistance in water and air and a hybrid solution for hydraulics.