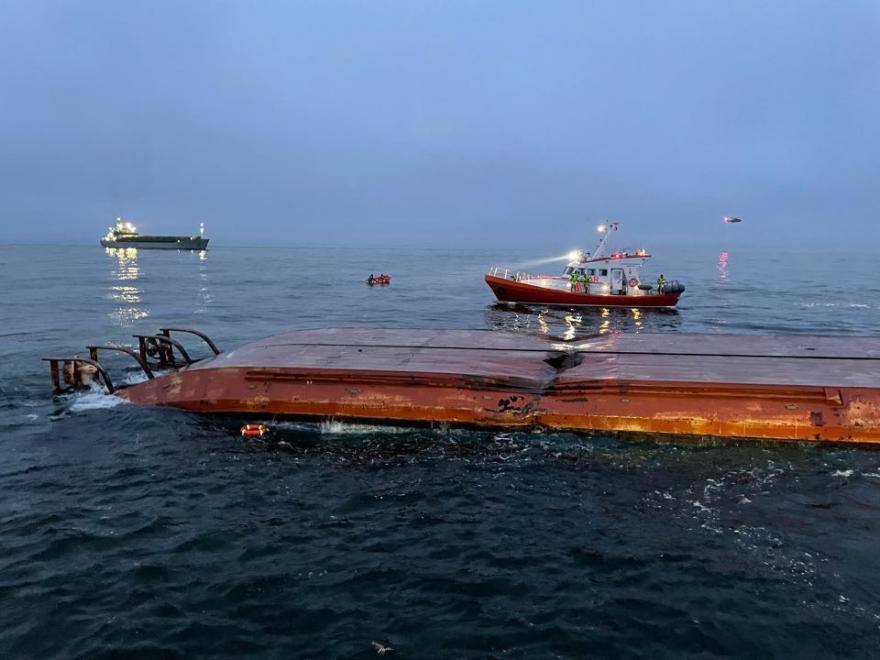 In the early morning hours, general cargo ship Scot Carrier and splitbarge Karin Høj collided in the Baltic Sea. The Karin Høj capsized and the two crew members of this vessel are missing. The cause is still unknown, but the Swedish Coast Guard says criminal suspicions have arisen, including intoxication.

The collision occurred early in the morning at around 3:30 am (local time) between the Swedish city Ystad and the Danish island of Bornholm. A rescue operation was launched involving nine lifeboats and helicopters, but the two missing crew members were not located.

During the morning, the Coast Guard’s ship KBV 314 together with the Swedish Sea Rescue Society’s (Sjöräddningssällskapet) Gad Rausing connected to the capsized ship and towed it due south of Sandhammaren to ground it and prevent it from sinking. Diving will soon begin to see if the missing crew members are still inside the ship.

‘With the ship aground, our and the rescue service’s divers can search for missing crew members and minimise the risks of an oil spill,’ says the Coast Guard’s rescue leader Fredrik Gustafsson.

The weather conditions are favourable and are expected to be so during the day. There are currently no signs of oil leaking in connection with the accident.

A preliminary investigation into gross negligence in maritime traffic was initiated by prosecutors during the morning.

The Coast Guard has both aircraft and vessels in place: The surveillance vessels KBV 314 and KBV 034 from Malmö and KBV 302 from Karlskrona and the aircraft KBV 501. The Coast Guard’s combination vessel KBV 002 Triton from Gotland is also on its way.

Diving inside the vessel has been completed. One of the two missing crew members has been found dead inside the vessel. The Swedish Coast Guard is now focusing on securing the fuel on board the capsized vessel.

‘Right now we have a number of vessels in place and the plan is to pull the wreck out into deeper water and further into the shelter overnight. Tomorrow’s work is focused on towing the wreck to Skillinge where it will be turned up,’ says rescue leader Fredrik Gustafsson.

Swedish police have arrested two crew members, of British and Croatian nationality, from the British cargo ship Scot Carrier. They are suspected of gross negligence and intoxication.