Dutch Anti-Submarine Warfare Frigates return to the drawing board 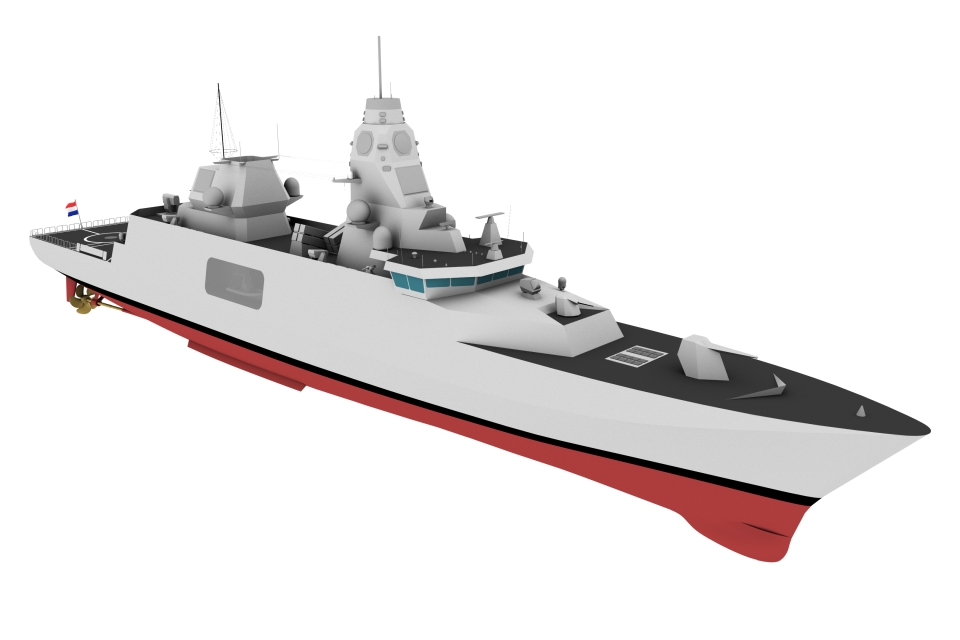 The Royal Netherlands Navy’s replacement programmes have suffered yet more delays. After it first became known its new submarines would hit the water three years later than planned, it has now become clear the Anti-Submarine Warfare Frigates (ASWFs) and replacement of the cannons on board the air-defence and command frigates face delays as well.

The ASWF will replace the current M-frigate. In total, four of these ships will be built, two for the Belgian Navy and two for the Dutch Navy. The original planning was for all of the vessels to be available in 2030. The project is currently in the so-called D-phase of acquisition preparation, which will be concluded with the D-letter, the letter announcing an irreversible decision.

Frigates need to be larger

State Secretary for Defence Christophe van der Maat has now informed Dutch Parliament that this D-letter will be sent later than planned. In the D phase, it became clear that the design would have to be modified on the basis of the requirements for a scalable and future-proof frigate. The ship needs to be larger in order to accommodate the package of requirements.

Together with the suppliers, more time is needed to perfect the design. As a result, the Ministry of Defence expects to send the D-letter to the House of Representatives between late 2022 to early 2023. The approach is to limit the consequences for the inflow planning as much as possible. This will be included in the D-letter. So it seems obvious there will be a delay, but it is not yet clear how much. It has also not been revealed how much larger the vessels will become.

It has already been revealed that Damen Naval will build the vessels.

The Dutch air-defence and command frigates, consisting of four vessels, are to receive new cannons to replace old ones. Originally, this project was to be completed in 2026, but this has now been postponed to completion in 2029.

In this project, not only the cannon itself will be replaced, but also the ammunition supply and storage system, which is spread over three decks in the ship. Preparations for the installation of the first cannon are in full swing. The steel structure of the old cannon has been removed and the ship has been made accessible for the placement of the first (semi-)automatic ammunition supply and storage system. In the coming period, the steel construction of the ship will be adjusted so that the first ammunition system can be placed.

According to the State Secretary, the ship modifications in this project are so extensive that the activities can only be carried out during major maintenance of the frigates. To ensure the deployability of sufficient frigates, the Ministry of Defence will minimise the overlap between the major maintenance periods of the various frigates. With the preparations for the first conversion it has become clear that the replacement of the 127 mm cannon in combination with the planned work on other projects on the frigates will take more work and time than anticipated. As a result, the major maintenance period for each ship has been extended by three quarters and this project will take three years longer for all ships together. This postpones the completion of this project for the last ship to 2029.

In addition to the replacement programmes, the midlife update of the Landing Platform Dock HNLMS Johan de Witt has also suffered a year’s delay.

In order to reach an acceptable contract, the tender for the platform work took a quarter longer than anticipated. The contract for this work was signed on 17 December and the work, which has a lead time of one year, started in March 2022. The adjusted planning fits in with the Royal Netherlands Navy’s operations schedule, says Van der Maat.

The work includes a range of replacements and modifications in the areas of propulsion, hull, piping, radars, communication equipment, networks, monitoring and control installation, power supply and self-defence.

In April, it became clear that the replacement of the Dutch submarines of the Walrus class is facing yet more delay. As a result, two of the existing vessels will be taken out of service so that the remaining two can sail longer than planned using their parts. On the other hand, the cumbersome procurement process is being improved to speed up selection of a shipyard.

Indicatively, the first two new submarines will be available for deployment in the expected period 2034-2037. This may be sooner than if the Dutch government were to stick to the current process (2035 – 2038), but much later than the planning that was still being considered last year (by the end of 2031 at the latest).

Picture: Artist impression of the ASWF as released by the Ministry of Defence in 2021. The new vessel will become larger than pictured here.