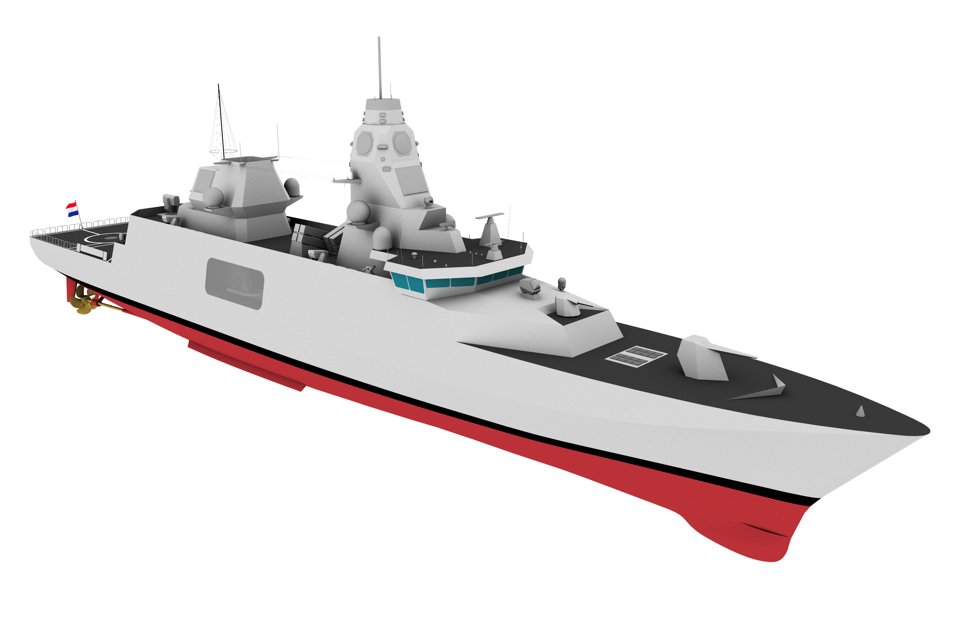 The Dutch Ministry of Defence will replace its current M frigates with two new ones. Their main task will be to fight submarines remotely using a new torpedo. Although NMT is happy the Dutch government is taking the next step in the development, the trade organisation has expressed concern about the delay in delivery.

State Secretary of Defence Barbara Visser wrote about the replacement plans in a letter on the research phase that the House of Representatives received on Wednesday 24 June. The current four multi-purpose (M) frigates of the Belgian and Dutch navies are at the end of their lifespan.

In addition to submarine combat, the new frigate must be able to protect itself and other units. It must be deployable worldwide for maritime combat and safety operations and assistance. This requires defensive means against threats from the air and from enemy ships.

For this purpose, the frigate will be equipped with ESSM Block 2 anti-aircraft missiles and the replacement of the Goalkeeper rapid fire cannon. These new weapon systems are complemented by heavy remote-controlled machine guns and light machine guns against small surface threats. To combat larger surface targets, the Ministry of Defence is purchasing the successor to the Harpoon anti-ship missile.

The most important weapon system against submarines is the new torpedo purchased with the project “Replacement Mk46 Lightweight torpedo”. This torpedo can be deployed from the ship or by the NH90 starboard helicopter. For defence against enemy torpedoes, the frigates get a system to trick enemy torpedoes. In the future, a so called hardkill system will follow, an anti-torpedo torpedo.

The frigate has room for a 110-man crew, which is significantly less than the 150-160 of the current M frigate. For mission-specific personnel and their equipment, forty extra beds and various spaces are available.

The research phase has now been completed with a design that meets the requirements of the Ministry of Defence and NATO. Partners Belgium and the Netherlands went through the design process with shipbuilder Damen and Thales. The latter is the supplier of the integrated radar and fire control system.

Making a careful trade-off between requirements, budget and planning proved complex and took more time than expected. Added to that was the preparation for the purchase of the Combat Support Ship. The available design capacity had to be divided between both projects, with the Combat Support Ship being the priority for the Ministry of Defence.

It was also investigated whether a design ‘off-the-shelf’ would provide a usable and affordable alternative more quickly. However, this design did not meet the requirements of the Ministry of Defence and would save little time. The research did help to formulate the requirements critically, for example in terms of mission modularity.

The latter means that the frigate must be able to perform a variety of tasks. These tasks, however, are not all performed during one and the same mission. By taking this as a starting point, it turned out that the ship could be smaller and cheaper. But still the new frigate will be bigger than the current M frigate (5500 tonnes against 3300 tonnes).

NMT: ‘Delays are damaging the entire chain in naval construction’

Earlier it was reported that the first new frigate would be operational from around 2025. By now it is clear that after the conclusion of the contract a detailed design phase of about two years is needed before construction can start. This is longer than initially foreseen. It is therefore expected that the first ship will be delivered in 2027. After that, the operational effectiveness and safety will be tested. The navy is expected to receive the first frigate in 2028 and the second one year later.

Trade organisation Netherlands Maritime Technology (NMT) is very unhappy about the delay. In a response, Innovation & Human Capital Director of NMT Marnix Krikke says: ‘This delay completely ignores the urgent call from all maritime industries to bring forward already planned government investments and thus ensure the preservation of the Dutch naval cluster. What’s more, this decision means that our navy men and women will have to carry out their tasks with heavily obsolete equipment for an even longer period of time.’

‘Delaying this order, which involves approximately two billion euros, is damaging the entire chain in naval construction,’ adds Krikke. ‘Postponement of projects means postponement of innovation and work by Dutch companies. This is detrimental to the development of our high-quality industry. Moreover, the delay of the frigate order does not stand alone. After all, several other tenders for the Royal Netherlands Navy have also been delayed. As a result, the Cabinet has missed out on a number of opportunities to support its own strategically important maritime manufacturing industry, which has been hit hard and protracted by the Corona crisis.’

The Dutch and Belgian government agreed to work together on the replacement of the countries’ current mine hunters (six new ones for each country) as well as the M frigates, of which Belgium currently also has two. Belgium is taking the lead in the mine hunter project, while the Netherlands takes point for the frigates. This means that an additional two frigates will be built for the Belgian navy. The Belgian frigates will be delivered no later than 2030.

The project is now entering the phase of the so-called acquisition preparation. The result is expected at the end of 2021.