Next refloat Ever Forward only after crane barges have removed containers 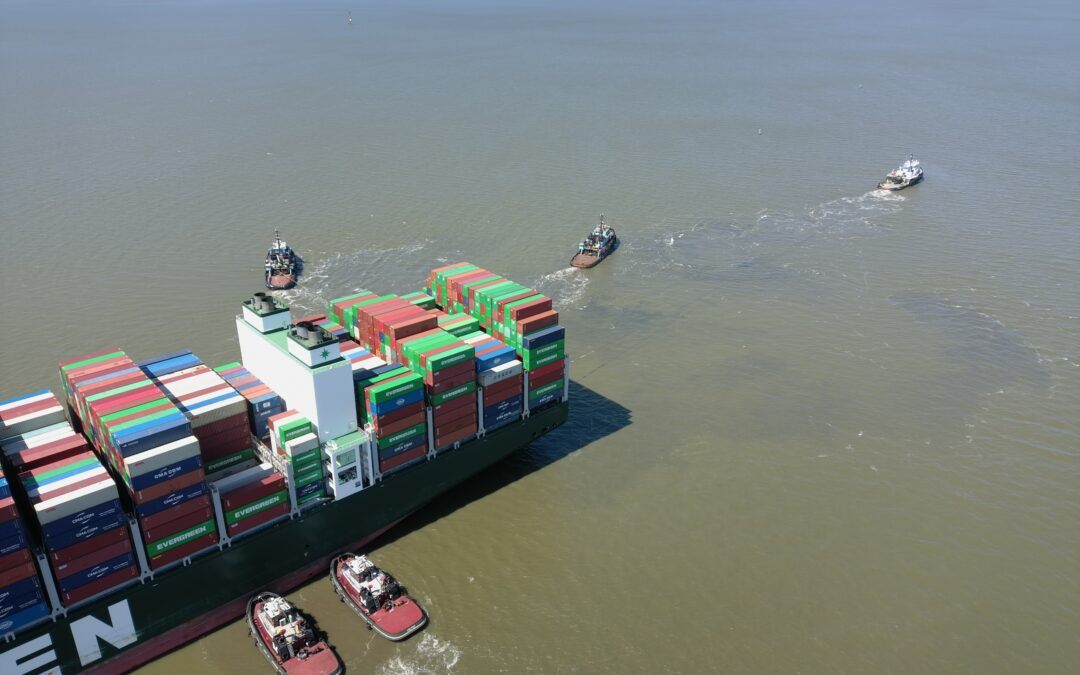 The strategy to refloat the grounded 11,850 TEU container ship Ever Forward has been revised, reports the US Coast Guard. Although dredging will continue to a depth of 43 feet as was already announced, over the next two weeks crane barges will be used to remove containers from the vessel before a new refloat attempt will take place.

Salvage experts have determined they would not be able to overcome the ground force of the Ever Forward in its current loaded condition. The new strategy offers the best chance of successfully re-floating the container ship, according to the US Coast Guard.

The previously announced dredging will continue to a depth of 43 feet (over 13 metres) and shipping containers will now be removed as soon as the installation of two crane barges, with suitable lift heights to remove containers, are installed.

The containers will be removed in daylight hours only for safety purposes from both the port and starboard sides and placed on receiving barges. Then, these barges will shuttle the containers back to their original onboarding facility, Seagrit Marine Terminal in Baltimore, where they will be offloaded by shore-based handling gear.

Once the containers are removed, tugs and pull barges will attempt another refloat. The shipping channel will remain open to one way traffic during these operations, any changes will be announced via normal maritime means. All aspects of the operation should take approximately two weeks, however that timeline may change based on weather conditions and other variables outside of the control of the US Coast Guard Unified Command.

A 500-yard safety zone around the ship in the Chesapeake Bay will continue for the duration of the operation and the adjacent shipping channel will remain unaffected. The zone has been established to provide for the safety of persons involved in the salvage operation as well as the integrity of the marine environment.

Ensuring the ship’s stability and monitoring for any signs of pollution continue to be top priorities for the Unified Command and responders. In addition to regular soundings of fuel and ballast tanks, a naval architect and salvage master are remotely monitoring a recently installed sensor system to constantly evaluate the ship’s stability and integrity and will continue to do so throughout the refloat operation. They will also continue to conduct regular visits to the ship.