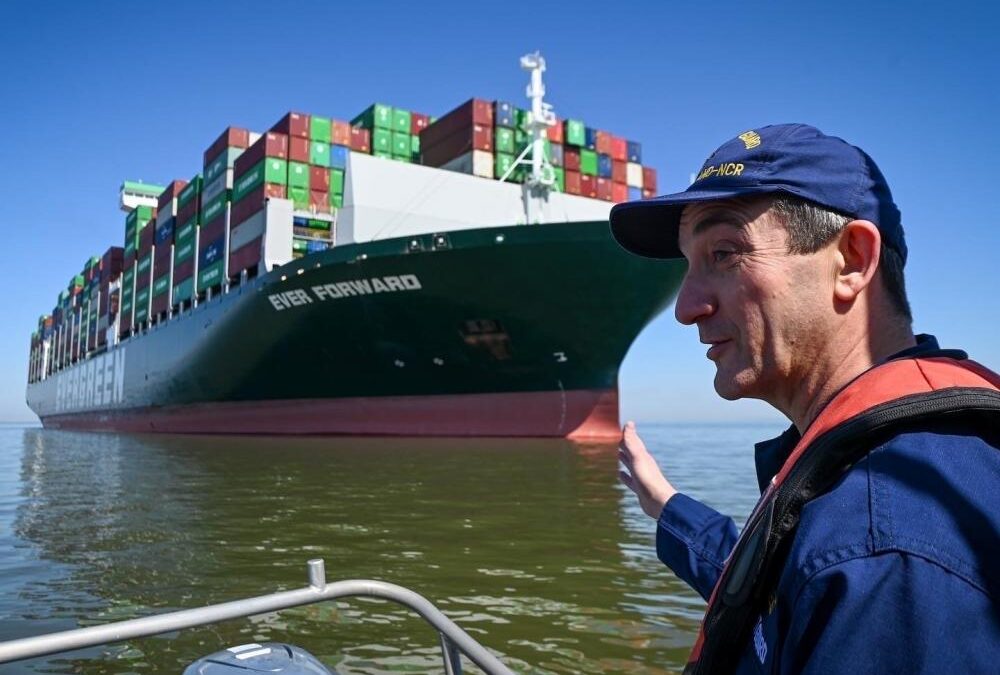 Evergreen Line has hired Smit-Donjon to refloat the grounded 11,850 TEU container ship Ever Forward. The plan is to lighten the ballast and dredge mud from around the vessel. After that, tugs will try to pull the ship free during high tide. Dredging has already begun.

Donjon-Smit is a joint venture of Donjon Marine Co. and Smit Salvage established in 2004. Smit Salvage (parent company Boskalis) was also responsible for refloating the Ever Given. This Evergreen container ship ran aground in the Suez Canal in March 2021 and blocked the Canal for almost a week.

Since the Ever Forward grounded on Sunday, 13 March, Evergreen says divers have been sent to conduct underwater inspections. According to the shipping company, the accident did not cause damage to the vessel’s hull and there is no leakage of fuel. The propeller and rudder of the ship are fully functional.

After Donjon-Smit was hired by Evergreen, a team of experts went to the scene to assess the vessel’s grounding condition, the weight of the cargo on board and the tidal range at the location in Chesapeake Bay.  This information was used to design the plan to refloat Ever Forward.

In terms of planning for rescue operations, dredgers will be used to excavate around the stranded vessel to remove part of the mud, increase the buoyancy of the hull, and increase the space (clearance) between the propeller, rudder and the seabed to ensure the safety of the ship.

The rescue team is mobilising all available local tugboats to join in the refloating operation, states Evergreen. After sufficient mud is excavated, the amount of ballast water on Ever Forward will be adjusted to reduce the ship’s weight and the refloating operation will begin using both the tugboats and the power of the container ship’s main engine.  The rescue team will carry out the plan utilising the most beneficial high tide period in the port area.

Dredging around Ever Forward has begun

On Sunday, 20 March, Executive Director of the Port of Baltimore William Doyle said dredging around the vessel had started and that all permits had been issued by state and federal agencies. Among the equipment deployed is the dredge Dale Pyatt, a clam shell dredge of Cashman Dredging and Marine Contracting.

Captain David O’Connell, the section Sector Commander of the Maryland-National Capital Region, told CBS News that he expects that from the time the dredging operation starts, it will take about ten days for the container ship to be refloated.

The 334-metre-long Ever Forward ran aground after leaving the Port of Baltimore on its way to Norfolk, Virginia. The Ever Forward was built in 2020 and sails under the flag of Hong Kong.