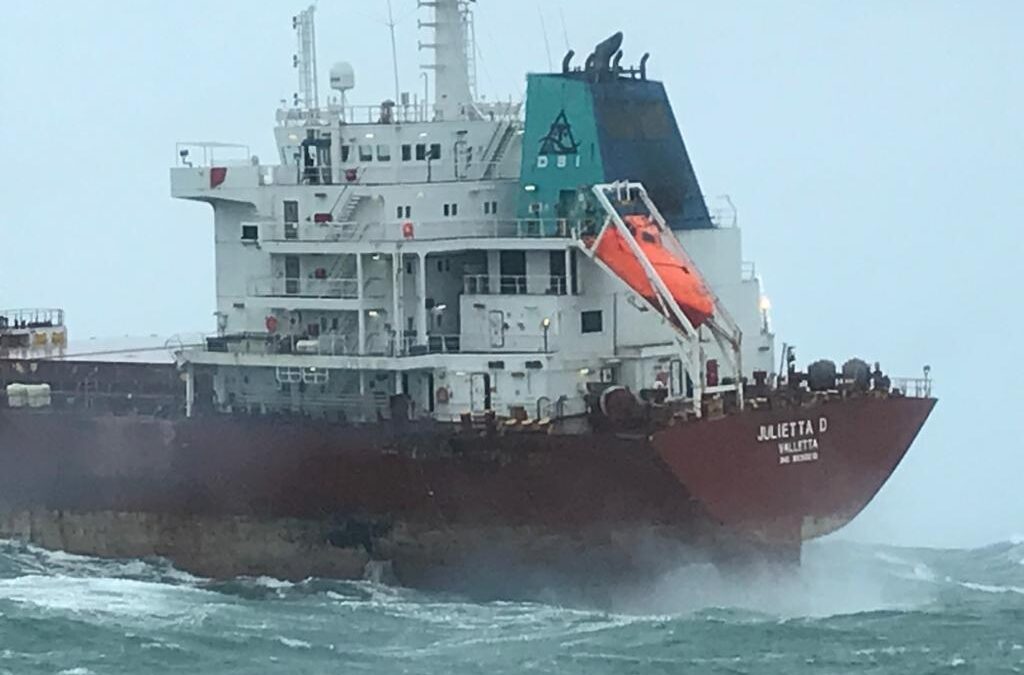 A collision has taken place this morning (31 January) between two ships in the anchorage area at IJmuiden, the Netherlands. It concerns bulk carrier Julietta D and oil/chemical tanker Pechora Star. The Julietta D is taking on water and evacuation of the eighteen crew members has been started.

The collision has taken place several kilometres from the shore. During the day, there was a storm off the west coast of the Netherlands.

The Dutch Coast Guard reported that the situation on board of the Pechora Star is stable, whereas the Julietta D is adrift and taking on water. Several rescue boats and helicopters were alerted.

The Coast Guard sent SAR helicopters to the ship, which succeeded in lifting all crew members off the ship. A total of two Dutch Dutch SAR helicopters were deployed with assistance called in from a third one of the Belgian Coast Guard.

See footage of the evacuation of the crew below.

The Julietta D had been adrift since the collision and around noon it ended up within the wind farm Hollandse Kust Zuid, about eighteen kilometres off the Dutch coast. The wind farm is still under construction.

At 12:50 pm, the Coast Guard reported all crew members of the Julietta D had been evacuated with helicopters.

The latest update also revealed that both ships were anchored in the anchorage area near IJmuiden when the anchor of the Julietta D did not hold and the collision ensued. The Juliette D is unloaded. The Pechora Star remains stable, does not make water and has not lost any cargo.

The Netherlands Coast Guard has reported that the bulk carrier Julietta D has hit the foundation of a transformer platform that was yet to be installed. It is not known whether there is damage to the foundation.

In the meantime, Dutch public broadcasting company NOS has reported that personnel from a drilling platform about 18 kilometres off the coast of Scheveningen are being evacuated by helicopter as a precaution. Three employees were working on the drilling platform this afternoon.

At the time of this update, the tugs Sovereign and Multratug 18 were on their way to the Julietta D. They are to try and tow the vessel to shore.

UPDATE 16:44: Salvage people being brought on board

The Coast Guard has reported the salvage team has succeeded in securing a tow line from the Julietta D to the tug Sovereign.