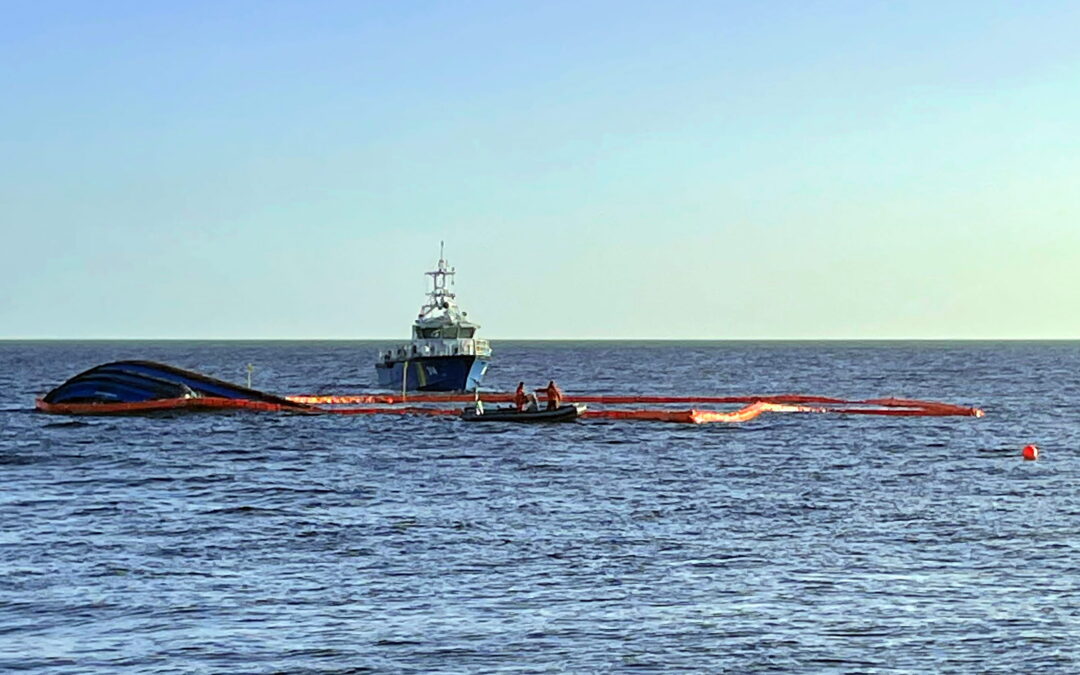 The Swedish Coast Guard continues to work on the capsized vessel Karin Høj to prevent an oil spill. The contracted salvage company has presented a salvage plan approved by the Coast Guard and Swedish Transport Agency. The salvage operation is scheduled to begin Friday morning.

The splitbarge Karin Høj collided with cargo vessel Scot Carrier early Monday morning at around 3:30 am (local time). The collision occurred between the Swedish city Ystad and the Danish island of Bornholm in the Baltic Sea. The Karin Høj capsized as a result. One of its two crew members was found dead inside the ship. The other remains missing.

The salvor plans for the lifting and turning of the Karin Høj to take place at sea. If all goes according to plan, Karin Hoej will then be taken to Denmark.

‘The salvage company will begin its work on Friday morning. Should complications arise, the salvage plan may need to be adjusted and approved again,’ says Fredrik Gustafsson, rescue leader at the Swedish Coast Guard.

He adds that the Coast Guard will also go on board the ship, to investigate the spaces for the crew member who is still missing.

A small amount of oil came out to sea on Wednesday, caused by the ship moving and changing position. Gustafsson: ‘Since yesterday, the outflow of oil has decreased. The focus for the next 24 hours is to ensure that nothing more leaks out.’

Last night, the Swedish Coast Guard started using absorbent booms to contain the oil that came from the capsized vessel. Divers have also inspected the wreck to see if it was possible to carry out sealing work under the surface.

Although was reported to be sinking yesterday, its position is now stable, with the bow still above water.

Two crew members of the Scot Carrier were arrested on suspicions of intoxication. The Swedish Public Prosecutor’s office has decided to lift the arrest of one of them, a Croatian citizen, although suspicions remain. The prosecutor has asked the arrest of the second crew member of British nationality to be extended however. In addition to intoxication, he faces charges of causing death by gross negligence.

Picture: KBV 314 with booms around the capsized Karin Høj (by the Swedish Coast Guard).