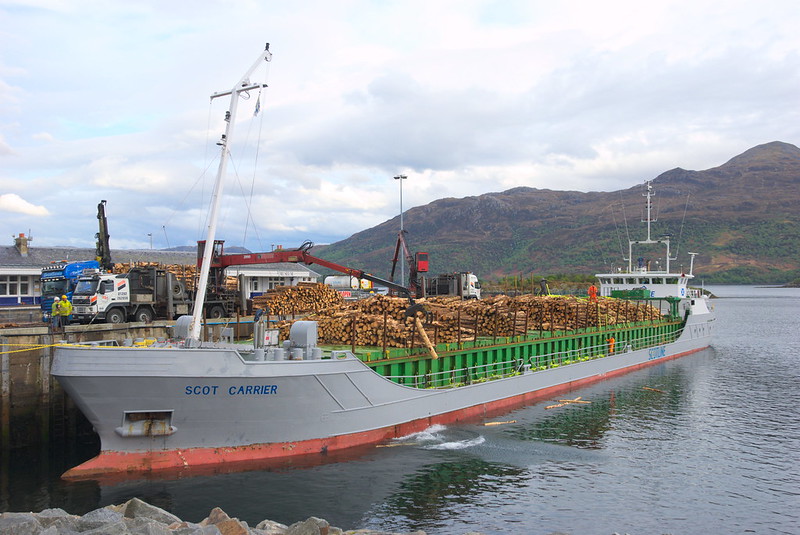 A general cargo ship and splitbarge have collided in the Baltic Sea off the Swedish coast this morning. It concerns UK-flagged Scot Carrier and Danish flagged splitbarge Karin Høj. The latter has capsized. According to the Swedish Maritime Administration (SMA), at least two men have ended up in the water.

The collision occurred early in the morning at around 3:30 am (local time) between the Swedish city Ystad and the Danish island of Bornholm. The Swedish Maritime Administration (SMA) says that two people from the Danish ship’s crew are missing.

A rescue operation was launched involving nine lifeboats and helicopters, but the search was initially hampered by darkness. The SMA has said no-one has been found so far and the water temperature is just 4°C. Divers have been sent out as well. The Scot Carrier is also assisting in the search and has reported its own crew is safe.

The Swedish Coast Guard reports it has ships on site to act on any environmental pollution, but says there are as yet no ongoing oil spills.

At 9:00 am, the Swedish Coast Guard vessel KBV 314, together with the Sea Rescue Society’s vessel Gad Rausing, connected to the capsized ship to tow it aground. This is to prevent a sinking and to enable divers to search for missing crew members.

The cause of the collision is as yet unknown, but the Swedish Coast Guard says a ‘preliminary investigation into gross negligence in maritime traffic is being conducted under the direction of prosecutors’.

The Karin Høj is 55.06 metres long and 9.04 metres wide. It was built in 1977 and belongs to Rederiet Høj. It was sailing from Sodertalje in Sweden to Nykoebing Falster in Denmark when the accident occurred.

The Scot Carrier was built for Scotline by Royal Bodewes Shipyard in the Netherlands and delivered in 2018. The vessel is 89.98 metres long and 15.2 metres wide with a GT of 3450. It had left Salacgriva Port in Latvia and was headed to Montrose in Scotland.

At 10:30, the Swedish Maritime Administration ended its search operation at sea for the two missing persons in the water. The two people are still not found. Continued search will take place in the ship when it is closer to land. The Sea Rescue Society and the Coast Guard are currently towing the capsized ship closer to land. When this is done, divers from the Swedish Armed Forces and the Coast Guard, among others, will search the ship. It is as yet inclear when the towing operation will be completed.