Vessel that capsized in Baltic Sea collision is sinking 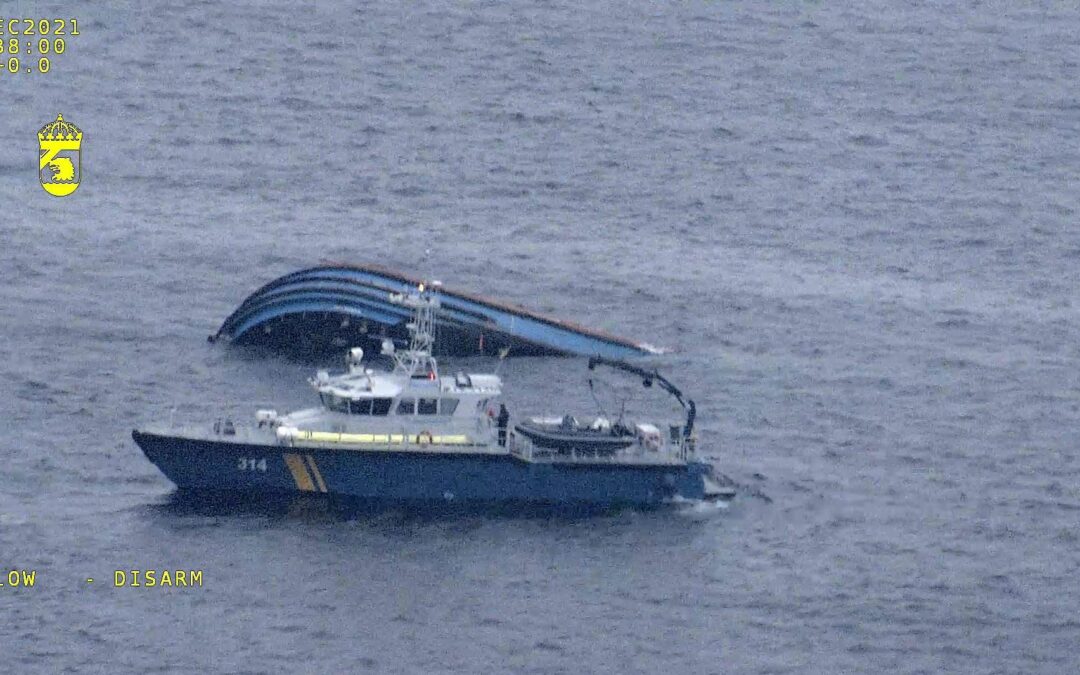 The splitbarge Karin Høj, which collided with the general cargo vessel Scot Carrier on Monday and subsequently capsized, is sinking. The Swedish Coast Guard is working to contain an oil spill from the wreck. One of the crew of the Scot Carrier is still under arrest on suspicion of intoxication.

The collision occurred in the early morning hours of Monday and resulted in the Karin Høj capsizing. One of the two crew members of the Karin Høy has been found deceased inside the vessel. The other is still missing. The Scot Carrier suffered no casualties.

During Wednesday afternoon (15 December), the ship Karin Høj’s buoyancy deteriorated and the wreck started sinking. ‘A sinking is not something we wanted, but have been prepared for. The place where the wrecked ship was anchored has been chosen in consultation with the County Administrative Board in Skåne, given the bottom conditions and prevailing weather,’ said rescue leader Jesper Bäckstedt.

The ship had been anchored northeast of Simrishamn outside Tobisborg. It is located in approximately 15-metre-deep water above a sandy bottom and currently does not constitute an obstacle to shipping.

According to the Swedish Coast Guard, it is unclear why the ship started sinking now. The Coast Guard is on site with aircraft, ships and divers.

The Swedish Coast Guard detected an oil spill from the capsized vessel. The total amount of oil leaked is currently unknown. After flights over the wreck site, the Swedish Coast Guard estimates this to be between 30 to 300 litres of oil and suspects it to be hydraulic oil, but this cannot be determined at the moment.

Late last night, the Coast Guard stated that the outflow of oil had decreased and that the ship had sunk further. ‘The focus for the next 24 hours is to collect the oil and ensure that no more leaks out,’ said Bäckstedt.

During the evening and night, the Coast Guard and Swedish Sea Rescue Society would ramp up their efforts to contain the oil spill with absorbent booms. Bäckstedt: ‘In parallel, we are preparing a diving effort to carry out sealing work on the wreck.’

According to current weather forecasts, the discharged oil will drift in an easterly and north-easterly direction and thus does not risk reaching land areas in the area around Simrishamn.

The Coast Guard has set up a safety perimeter around the vessel of 500 metres and issued a flight ban.

A Danish salvor has been contracted by the vessel’s owner, Rederiet Høj. In order for a salvage to take place, the owner must present a salvage plan that must be approved by the Swedish Transport Agency and the Coast Guard. This was presented on Wednesday afternoon. The Swedish Coast Guard says discussions about the plan are ongoing and an approval will come no earlier than Thursday morning.

According to the contracted salvor, the vessel’s sinking should not affect the planned salvage operation to any great extent more than that the time required is expected to increase.

After the collision, Swedish police arrested two crew members, of British and Croatian nationality, from the British cargo ship Scot Carrier. They were suspected of gross negligence and intoxication.

The Swedish Public Prosecutor’s office has now said it has decided to lift the arrest of the Croatian citizen, who had been arrested on suspicion of aggravated drunkenness. In a statement, the prosecutor says ‘the suspicions have weakened, but currently remain for this person.’

The British citizen is still under arrest and the suspicions against him remain the same.

On Tuesday, interrogations were held with the two suspects and with a number of people in the crew of the British ship. ‘In other respects, the preliminary investigation has continued with the collection of logs and other saved information about the incident,’ says prosecutor Tomas Olvmyr.

No later than today (Thursday 16 December) at 12, the prosecutor needs to decide whether to request that the arrested crew member be detained.

Picture by the Swedish Coast Guard.