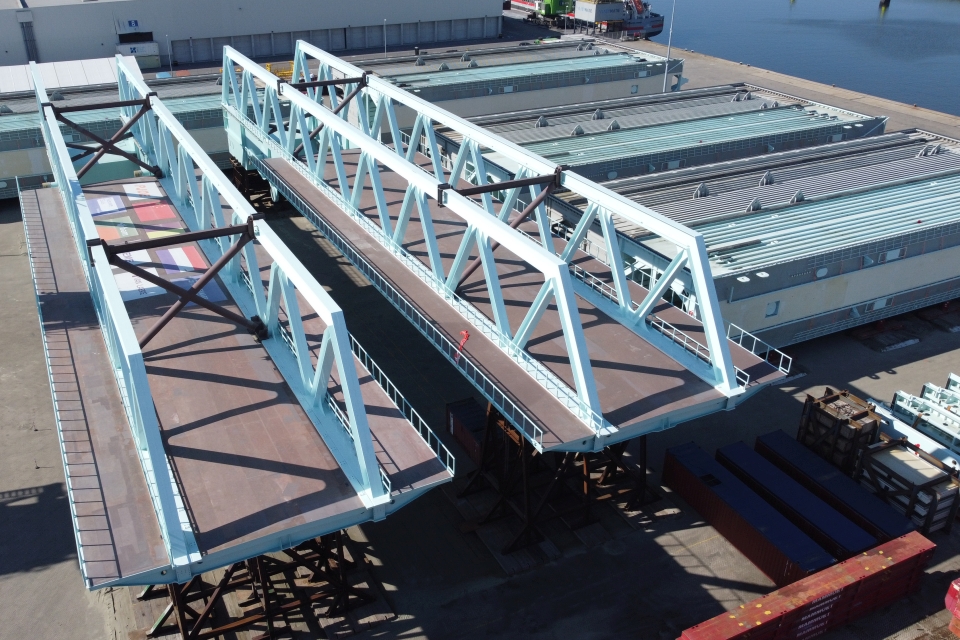 From 25 January, two bridges and four doors will be transported by pontoon to their final location in the Nieuwe Sluis (New Lock) Terneuzen. It marks an important step in the construction.

The bridges and doors will leave their storage location at Autrichehaven in Westdorpe by floating pontoon. A pusher and a tug will sail this pontoon via the Ghent-Terneuzen Canal along the headland south to the New Lock. The whole operation – depending on weather conditions – will take two weeks.

Once completed the New Lock will be 427 metres long, 55 metres wide and 16.44 metres deep. The New Lock was originally supposed to be completed in 2022, but this has been pushed back to somewhere in 2023. The delay is said to be the result of Covid, the presence of PFAS in the soil and the discovery of objects in the subsoil that needed to be removed.

One of the highlights of the operation is the tilting of the doors. The doors, 26 metres high, 62 metres wide, 9 metres deep and weighing 2000 tonnes, will be transported one by one in a lying position on a pontoon. Once in the right location, the door is tilted into a vertical position using a lifting jack.

Then, transport resumes and the pontoon sails the door into the New Lock’s door frame where it is installed.

In addition, the bridges are also transported to the New Lock by pontoon from the same storage site. Each of these is 86 metres long, 17 metres wide, 15 metres high and weighs 1540 tonnes. Before the bridge can be installed in place, it is raised to the correct height and rotated to the correct position.

The public can follow part of the transport of the first bridge and of the first two doors via webcam. It is not yet known when this will be exactly. An up-to-date schedule of the operation will be published on the New Lock website as soon as it becomes available.

The operation will start with one of the bridges on 25 January. This bridge will be installed on the side of the outer abutment. A few days later, the first door is loaded. This door is destined for a door frame in the outer abutment and will be tilted and installed a day later.

In a few days, the second door will follow. After these doors have been installed, the two doors for the inner part of the lock will sailed to their final location. The bridge for this section will follow as the final piece. As things stand, the operation is expected to be completed in about two weeks.

Navigating the gates and bridges is expected to cause minimal disruption to shipping. Transport from the southern headland to the New Lock will be planned at a time when ships are moored in the Western Lock and are not yet sailing in or out.

During the tilting moment of the doors, ships with a length of 180 metres or more and/or a width of 30 metres or more (so-called oversize shipping) cannot use the passing location at the tip of the headland south. Smaller vessels will be subjected to a speed limit to reduce waves.