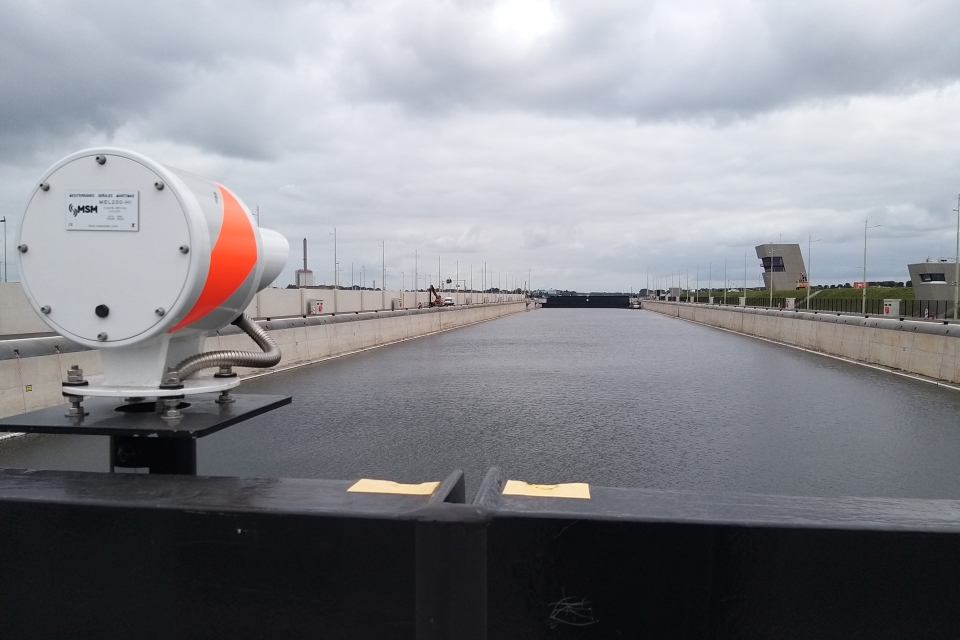 King Willem-Alexander of the Netherlands officially opened the IJmuiden sea lock on Wednesday afternoon, 26 January. The opening marks the commissioning of the largest sea lock in the world. The lock will be taken into use in mid-2022.

The new, larger sea lock replaces the Noordersluis, which has been in operation since 1929, and allows ships to pass through the IJmuiden lock complex smoothly and safely, regardless of the tides. The Zeesluis (sea lock) IJmuiden is 500 metres long, 70 metres wide and 18 metres deep.

Construction started in July 2016 and was completed in August 2021. This was followed by a period of testing by all parties who will be working with the sea lock, such as the operators, pilots, tugboats and flippers. Exercises were also held with the emergency services.

Rijkswaterstaat awarded the construction of the new IJmuiden sea lock at the entrance to the North Sea Canal to the OpenIJ consortium. This consortium was responsible for designing, building, and financing the new sea lock and will maintain it for the coming 26 years.

The IJmuiden sea lock project is part of Rijkswaterstaat’s Design, Build, Finance and Maintain (DBFM) lock programme. This project is co-financed from the TEN-T programme of the European Union. The DBFM Lock programme also comprises other projects: the Limmel floodgate, the Eefde lock (2) and the Beatrix lock Nieuwegein (Vreeswijk) (3).

Also read: IJmuiden sea lock to be completed this summer

After the King opened the inner door of the largest sea lock in the world from the Lock Operations Centre, the first ship, the Bontrup Amsterdam, entered the North Sea Canal. There, the ship was welcomed by a fleet of vessels representing the nautical service providers and public parties in the port, such as the Loodswezen (pilots), Svitzer, Police, Coastguard, Royal Marechaussee, Customs, KNRM, De Koperen Ploeg and the Vletterlieden Corps.

The Northern Lock (Noordersluis) is due for replacement in 2029. This replacement will now take place earlier at the request of the Province of North Holland and Amsterdam. Developments in freight and cruise shipping demanded a larger lock. By bringing forward the replacement and making the lock larger, it is expected this will be an impulse for the region.

Strictly speaking, the lock was not at the end of its service life. But its increasing sensitivity to breakdowns is hampering further growth of the ports behind. Hence the relentless lobbying from the business community for the new lock to enable growth to handling 125 million tonnes a year. In 2014, the ports of Amsterdam, IJmuiden, Beverwijk and Zaanstad shipped 97 million tonnes.

The lock gates have the following dimensions: Length 72 metres, height 24 metres and width 11 metres. The closed construction of the door can be compared to a ship. The doors have air chambers that allow them to float despite their weight of 3000 tonnes.

Ballast tanks filled with water ensure their stability. The lock chamber is levelled via the lock doors. This means that no bypass sewers were needed right next to the Noordersluis and that the stability and thus the functioning of the Noordersluis were guaranteed during the construction. In addition, this provides an advantage in terms of construction time and costs.

With a water level difference of one metre between the sea side and the canal side, 35,000 tonnes of water are levelled in an empty lock. The new sea lock has a double water retaining function that can be extended into the future. This means that during high water both the door on the sea side (outer head) and on the canal side (inner head) can be used as a flood defence. With this design solution, only one spare door is needed.

The construction of the lock should originally have been completed in 2019, but due to a construction fault, it took 27 months longer than planned. The delay also came with a significantly higher price tag. According to Dutch newspaper FD, the sea lock has resulted in a financial setback for builders BAM and VolkerWessels of around EUR 200 million.

The companies claim this is because Rijkswaterstaat continually adjusted the design and have filed for compensation. FD states a disputes committee will make a binding recommendation on the matter within a few weeks.