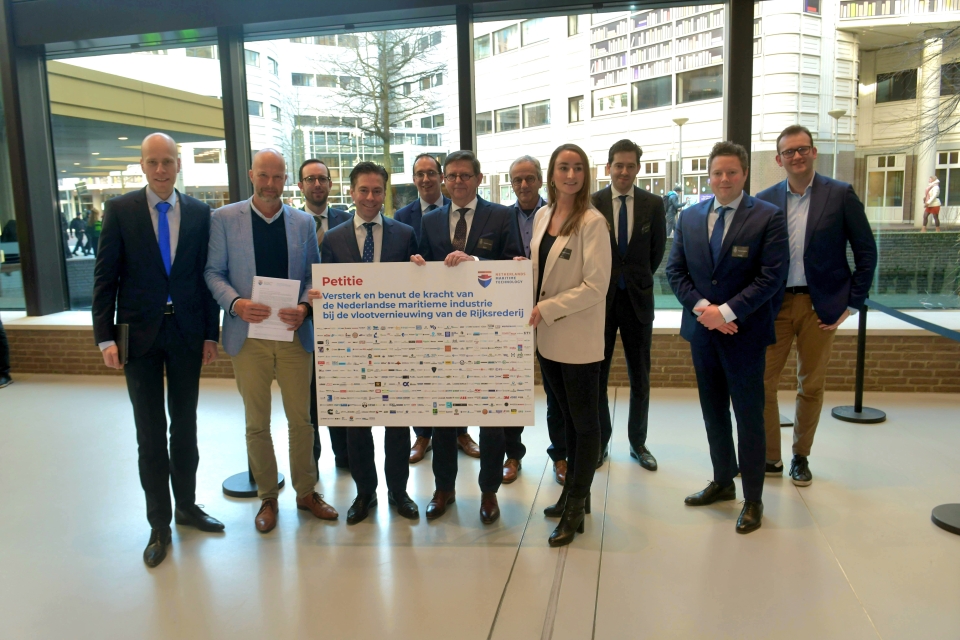 Netherlands Maritime Technology (NMT) presented a petition to Dutch parliament on 17 January on the importance of involving Dutch companies in the replacement of as many as ninety ships of the Rijksrederij in the coming years. This is necessary to remain competitive in a world where, among other things, massive Chinese domestic state support has completely distorted the European maritime market, NMT argues.

NMT, the trade organisation for shipbuilders, maritime suppliers and service providers, presented the petition to Tjeerd de Groot (D66), chairman of the Permanent Committee for Infrastructure & Water Management, and maintains that the fleet renewal programme is crucial for the Dutch shipbuilding sector to survive and innovate sustainably.

The fleet of the Rijksrederij (Government Shipping Company) comprises over ninety ships for customs, the Ministry of Agriculture, Nature and Food Quality and the Netherlands Coast Guard. Much of that fleet is at the end of its lifespan; the ships are polluting and maintenance-intensive by today’s standards, and many ships are simply obsolete after many years of service.

The Netherlands still has an innovative, knowledge-intensive shipbuilding industry; a sector that is working hard to contribute to the energy transition by developing sustainable ships and equipment, states NMT. This entails high investment costs, but also delivers: The Netherlands leads the way internationally and the sector generates many jobs. Currently, there is even a shortage of well-trained staff.

However, the number of niche markets in which the Netherlands stands out is shrinking, mainly due to the more than EUR 100 billion of Chinese state aid with which China has been dumping ships on the European market at forty per cent below market value for the last ten years. Ships that Chinese yards would never be able to deliver at that price without that state support. In addition, countries like Germany, France and Spain almost always contract out ships for government tasks domestically, barring some exceptions.

With the fleet renewal of the Rijksrederij, the government can strengthen the maritime industry and make the Netherlands a leader in building sustainable and even emission-free ships. In addition, given the shifts in global political power structures, increasing national (and European) strategic autonomy is important. A healthy manufacturing industry with knowledge, resources and capabilities contributes significantly to this.