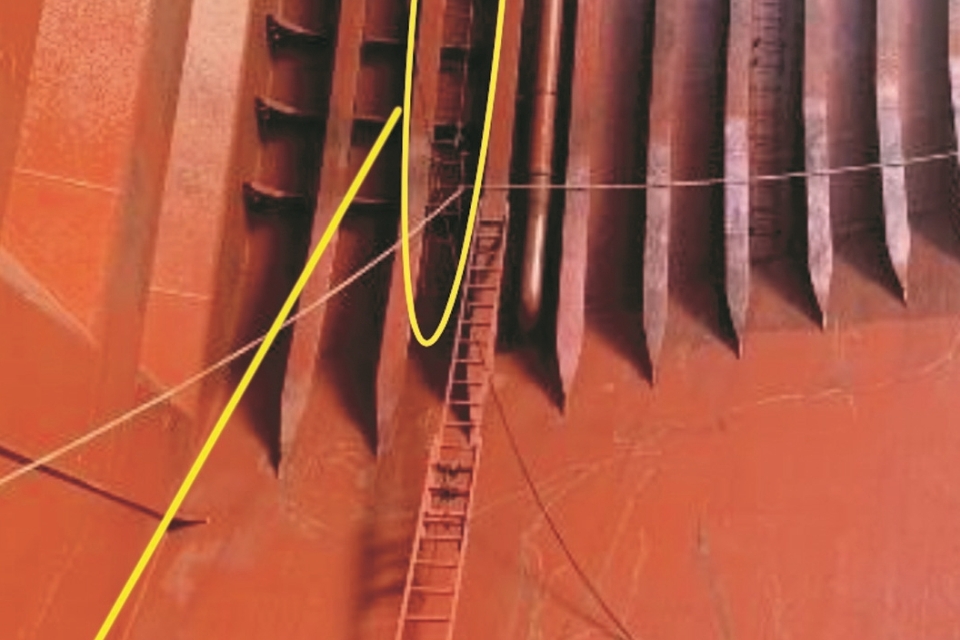 Perceiving to have control of a situation should never get in the way of safety measures. The Nautical Institute gives this warning in its latest Mars Report in which a crew member fell from height after not making use of his double lanyard.

A loaded bulk carrier was at sea. The deck crew were washing and cleaning cargo hold no. 7, which had remained empty. The crew members had donned their Personal Protective Equipment (PPE) which included a twin-lanyard safety harness for the crew member who would be working at height. The hatch covers were opened and a portable ladder was rigged on the starboard side, forward over the hopper and just abaft of the corrugated transverse bulkhead. The portable ladder was secured next to the fixed steel ladder. A guide rope and a safety line were secured across the upper reaches of the cargo hold.

Two crew were working aft while the other crew member aloft was forward, standing on one of the stiffeners at a height of about 7.5 metres above the tank top. He was using a power washer and a hand-held broom to wash off coal residues that had remained in this area.

Suddenly, the two crew members aft were alerted by a loud scream. They saw the victim had fallen from the stiffeners and was lying on the tank top, and rushed to aid him. The victim was conscious, bleeding slightly from the head, and complaining of severe chest and back pain. The accident was reported to the bridge and first aid was administered. The victim was then carefully evacuated from the cargo hold and taken to the ship’s hospital, where his condition was continuously monitored. At the time, the vessel was approximately 150 nm off the coast.

Following communication with shore medical authorities, the master altered course and proceeded towards the coast. The following morning the victim was air-lifted by helicopter to a local hospital. Injuries were severe, but not life threatening. The victim was returned to his home country for medical follow-up and recovery.

‘Get the work done’

The victim confirmed during the post-accident interview that at one point just before the fall, both of his safety lines had been unsecured. The investigative agency found, among other things, that the actions of the victim were similar to several other instances on file where the need to “get the work done” seems to override safety concerns, even where the situation was not an emergency.

It would appear that if the person in question perceives that they have “control” of the situation, this influences their decision making process and evaluation of risk.