Crew member dies after falling into hold through open hatch 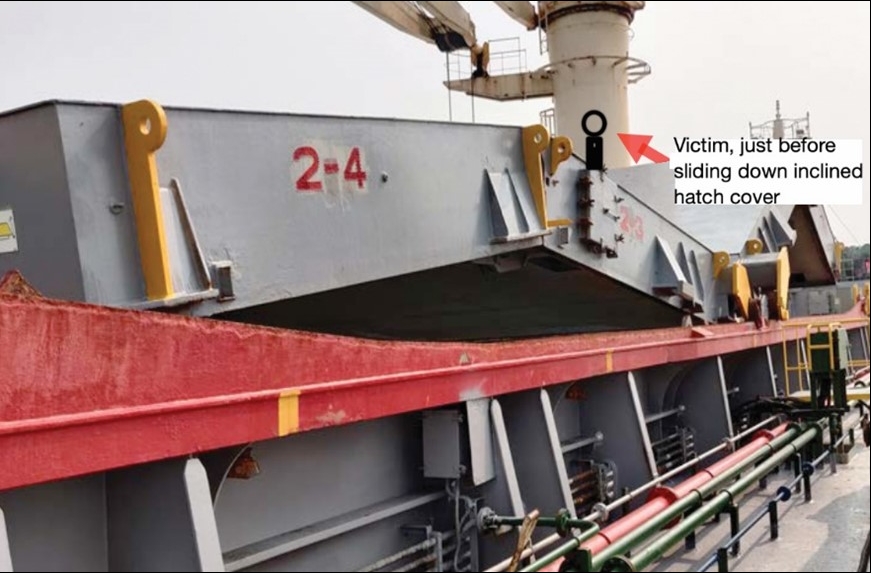 While cleaning hatch covers, a crew member fell to his death through a gap in the hatches. An incident that was the result of a weak safety culture, says The Nautical Institute in its latest Mars Report.

A bulk carrier in ballast was underway. The deck crew were washing the cargo holds, as clean holds were necessary for the planned arrival for loading in two days. Two teams were working at different locations.

After cleaning the forward panels, the washing crew member came down on to the hatch coaming to hose down the water to the middle cross joint area of the hatch cover. Then he went up again, this time to the aft panel No.2-3 (indicated by an arrow in the photograph), and started cleaning at the starboard side of panel No.2-3. While moving toward the port side, out of sight of the crew member tending the hose, he slid down the incline, through the gap in the hatches, and fell at least 17 metres to the hold tank top. A cry was heard and the crew member tending the hose began searching, only to see his colleague lying on the tank top of the hold in the middle of the hatch area.

The alarm was raised and the victim was quickly attended to, but he had no vital signs. First aid was nonetheless administered including CPR, but without success.

The official investigation found, among other things, that there was no responsible officer supervising or assessing the safety of the work. The Bosun was supposed to supervise both teams of two crew, who were working at different places. Instead, the Bosun went down to hold 1 with one of the teams. The Chief Officer was busy in the deck office preparing the loading plan for the next port, so there was no effective supervision of the team washing the hatch covers.

Additionally, crew did not use fall arrest equipment while working and climbing on top of the partially opened hatch covers.

In an environment dominated by a weak safety culture, even such a dangerous situation as standing at the top of an open inclined hatch without fall protection does not dissuade people from ‘getting the job done’.

Picture: Location of the victim before sliding down the inclined hatch cover.

Also read: Nautical Institute: Use fall prevention even if the height seems small

This accident was covered in the Mars Reports, originally published as Mars 202213, that are part of Report Number 354. A selection of this Report was also published in SWZ|Maritime’s May 2022 issue. The Nautical Institute compiles these reports to help prevent maritime accidents. That is why they are also published on SWZ|Maritime’s website.