Hydrogen as backbone for shipping decarbonisation 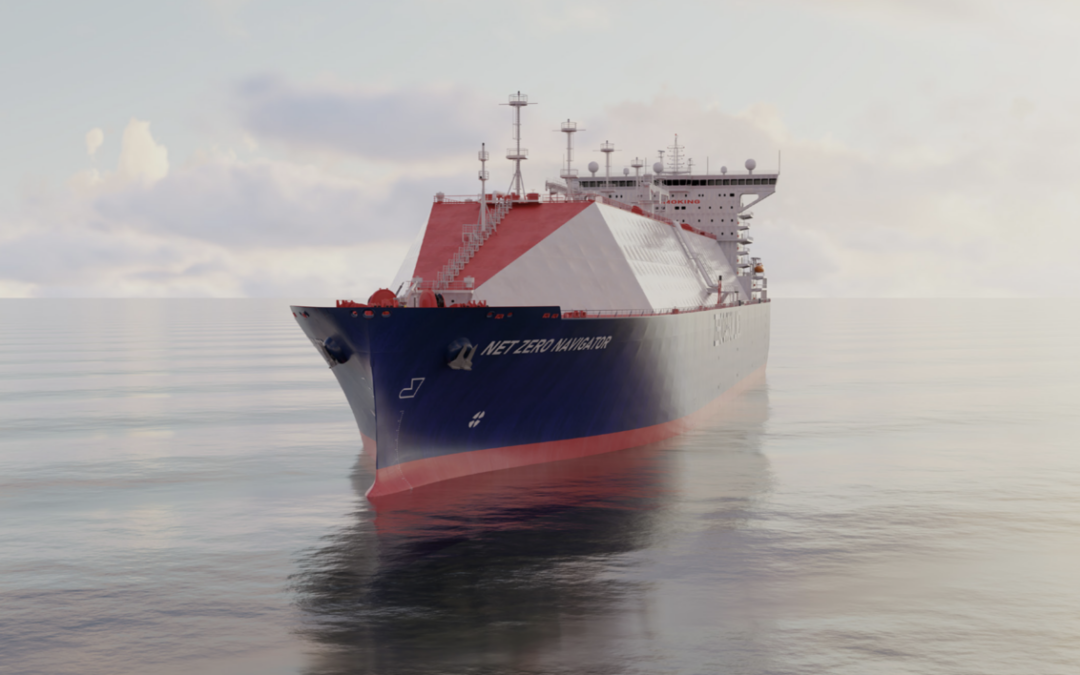 Deep-sea shipping has been the main transport mode for global trade for centuries. In the face of global warming, decarbonising shipping is imperative. What are the different potential pathways to achieve this and what will the role of hydrogen be? While it won’t be smooth sailing, it will be an exciting journey.

This article was written by Karen Baert and Thilo Braun of Hydrogen – Perspectives from Silicon Valley and published in SWZ|Maritime’s November 2022 issue.

The share of emissions stemming from shipping is expected to increase in the next few decades and this is for two main reasons. First, the shipping industry has consistently outgrown gross domestic product (GDP) over the last decades. It has doubled in volumes in the first two decades of the century and is expected to continue on that path in the decades to come.

Second, the industry has made little inroads towards decarbonisation compared to other industries. As stated by S&P Global [1], scientists project shipping to account for up to seventeen per cent of global GHG emissions by 2050.

Growth in shipping needs to be put into perspective within the larger transportation industry. Because of the large sizes of ships, shipping is by far the least emission-intensive mode of transportation, with rail, road, and air about 35, eighty, and 430 times more emission-intense respectively (measured in CO2 per tonne-km). However, on our path to decarbonisation, we need to find zero-carbon solutions for every industry including shipping, which is becoming more important as the shipping industry represents an increasingly large share of global emissions going forward.

As shown in the figure below, six types of ships represent about 85 per cent of all the energy consumption and hence emissions in the industry. These six ship types (container ships, bulk carriers, oil tankers, LNG tankers, chemical tankers, and cargo ships) all represent large to very large ships in deep-sea shipping. Unfortunately, finding low-carbon solutions for these large tankers and containers is the hardest nut to crack.

As shown in the second figure, the International Maritime Organization, the UN’s body responsible for regulating shipping, has committed to reaching a fifty per cent reduction in GHG emissions by 2050 as compared to 2008 levels and reducing carbon intensity by forty and seventy per cent by 2030 and 2050 respectively [3]. While these commitments send a clear market signal that change is needed, a lot needs to happen to turn these promises into reality.

Why decarbonising shipping is no smooth sailing

The quote ‘2030 is tomorrow, 2050 is one ship lifetime away’ from a shipping technology provider speaks volumes. Shipping is a very capital-intensive industry with long asset lifetimes. The average lifetime of a large ship is twenty to 25 years, which indicates the level of urgency needed to develop sustainable shipping alternatives. We need to deploy new technologies in the 2025-2030 timeframe to replace (very) large ships by 2030.

Second, the shipping industry is characterised by thin margins and hence is very cost-sensitive. Maritime transport is seen as the low-cost way to ship goods around the world, which comes with a low customer willingness to pay a green premium (an additional cost of choosing a clean technology over one that emits a greater amount of GHGs). Additionally, with about 57 per cent of shipping costs allocated to fuel, an increase in fuel costs would lead to a big increase in overall shipping costs.

Third, shipping is a global industry and hence is not affected by regional emission trading systems. Because of the international nature of the industry, a carbon tax on shipping is difficult to implement without international consensus. While a global carbon tax would help, this is not expected to happen in the foreseeable future.

On a more positive note, there are a lot of tailwinds for decarbonising shipping. Players like Amazon and Apple have committed to reaching net zero before 2050, and they won’t get there without the shipping industry. We hope that such corporate commitments will increasingly put decarbonisation on top of the agenda of the biggest maritime players and create a real sense of urgency.

There are no viable options to decarbonise deep-sea large-scale shipping cost-effectively today. Without an industry-wide solution available yet, big players are moving in different directions. While Maersk is moving in the direction of methanol [4], the jury is still out for MSC [5], and with that for most players in the industry. Maersk and MSC are the world’s two largest shipping companies, together representing more than thirty per cent of the global market.

The table above gives an overview of the different low-emission fuel types under consideration in comparison to traditional marine fuel oil. Batteries are intentionally excluded as they are not a viable solution for use in large-scale shipping given their low energy density. Five different types of alternative low-emission fuels (LNG, bio-fuels, green hydrogen, e-methanol, and e-ammonia) are evaluated against today’s status quo. To compare the different pathways, six key considerations are evaluated.

A closer look at the different fuels

Liquified natural gas can be used as an alternative to MFOs and comes with multiple advantages. It can run with both ICEs and fuel cell engines and it emits almost no sulphur oxides and particular matter. The downside is that it only reduces CO2 emissions by 21 to 28 per cent compared to traditional fuel oils [9]. Its use of non-renewable resources together with the only partial emission reductions make LNG a less attractive long-term solution.

Within bio-fuels, two generations can be distinguished. The first generation is based on edible crops, the second is produced from other types of bio-based feedstocks, such as municipal waste. With the need to feed a growing population, the food industry will outcompete the bio-fuel industry when it comes to land use, therefore, we don’t believe first generation bio-fuels will gain significant market share as alternative marine fuel. For waste-based bio-fuels, significant technological advances are needed to reduce its production cost and a wide range of feedstocks needs to be considered to increase the availability of feedstock.

In this article, we focus on green hydrogen produced through electrolysis with 100 per cent green electricity. Besides the high production cost of green hydrogen today, the low volumetric density of H2 even in liquid form (<9 GJ/m3) represents the biggest hurdle for adoption in deep-sea shipping. As this would mean that the fuel would take up about three times more space than on today’s large vessels, using hydrogen as a fuel would come with compromises in ship size and payload. While transferring some learnings from the LNG industry will hopefully accelerate the learning curve for liquid H2 in maritime [10], it remains unlikely for pure hydrogen to become the low-carbon shipping fuel of choice at large scale.

For small ships with short routes on the other hand, clean hydrogen is expected to be a viable decarbonisation pathway. With a volumetric energy density of some 16 GJ/m3, e-methanol is almost twice as dense as hydrogen and close to half as dense as MFO. Additionally, its relative ease of combusting and storing make methanol an attractive fuel. With estimated methanol costs for 2030 some four times the cost of MFOs, breakthrough technological innovations are needed for e-methanol to become an economic alternative shipping fuel. Assuming the production of e-methanol with green hydrogen and with currently available technologies, the emethanol production costs can only go down through the reduction of green hydrogen costs (and hence reduction of renewable electricity costs) as well as through cost-effective carbon sources.

Different to the traditional Haber-Bosch process, e-ammonia is produced with clean hydrogen and renewable electricity. With a volumetric energy density almost double the one of hydrogen and ammonia transportation and bunkering infrastructure already in place, clean ammonia could become a viable low-carbon fuel in the future.

However, innovations are needed both on the e-ammonia production side as well as on the engine and storage side to be able to deal with the highly toxic ammonia.

Measures that can reduce the energy intensity of ships

Besides thinking about alternative fuels and alternative propulsion methods, other measures can be taken to reduce the energy intensity and hence carbon intensity of shipping with existing ICE technologies [11]. This includes energy efficient technologies such as hull streamlining, route optimisation and wind propulsion technologies. We believe these technologies are necessary in the short term, but they will only lead to incremental improvements in energy efficiency. As an example, until innovative designs such as the Swedish Oceanbird [12] and Norwegian Vindskip [13] prove otherwise, most of the wind propulsion technologies don’t lead to more than ten per cent efficiency improvements.

Lastly, it is important to think about the decarbonisation of the shipping industry beyond the constraints and standards of the industry today. Could the road to net zero come with a disruption of shipping supply chains? The recent issues with port congestions make the need for change on that front more pressing than ever. Could there be a market for smaller (potentially hydrogen fuel-cell-powered) faster ships, which would increase the customer willingness to pay per mile/tonne transported? Smaller ships could access a wider range of ports, reduce port congestion issues and reduce the need for more carbon-intensive transportation methods such as road, rail and aviation.

From drop-ins to hydrogen as the backbone of zero-carbon

If you take anything away from this article, let it be the three following conclusions.

While methanol is less toxic and its engine technology is further advanced, ammonia has lower estimated production costs and more infrastructure in place today. The current high production costs of green hydrogen and renewable fuels make the scale-up of renewables and related scaleup of H2 and renewable fuel production capacity crucial to enable significant cost reductions on the medium to long term. To get a sense of the order of magnitude, a net zero scenario under these assumptions in 2050 would require green electricity for green hydrogen production equal to half of the total renewable production today [8].

Secondly, fuel cells are expected to play a key role in the decarbonisation of shipping. Fuel cells are more efficient than ICEs and with fewer moving parts, they are easier to handle and maintain. Additionally, unlike current ICEs, converting hydrogen in fuel cells comes with no SOX and NOX emissions, which is a big advantage given increasingly stringent regulations and geographically expanding emission control areas.

Thirdly, while e-ammonia and e-methanol might be the long-term vision for a decarbonised shipping industry, this will not happen overnight. Given the urgency of the climate crisis, it is important to continue to focus efforts and investments into building out solutions for the short and medium term too. Drop-in transition fuels such as LNG, bio-fuels and potentially e-methanol in existing ICEs together with energy efficiency improvements as well as route optimisations can and should help reduce emissions in the short and medium term.

2050 really is one ship lifetime away. Urgent actions are needed to accelerate innovation and deployment of solutions to decarbonise shipping. With low-carbon and zero-carbon fuels produced using renewable energy as the frontrunner for long-term shipping decarbonisation, it is hard to ignore that clean hydrogen is on its way to be the backbone for the industry’s decarbonisation.