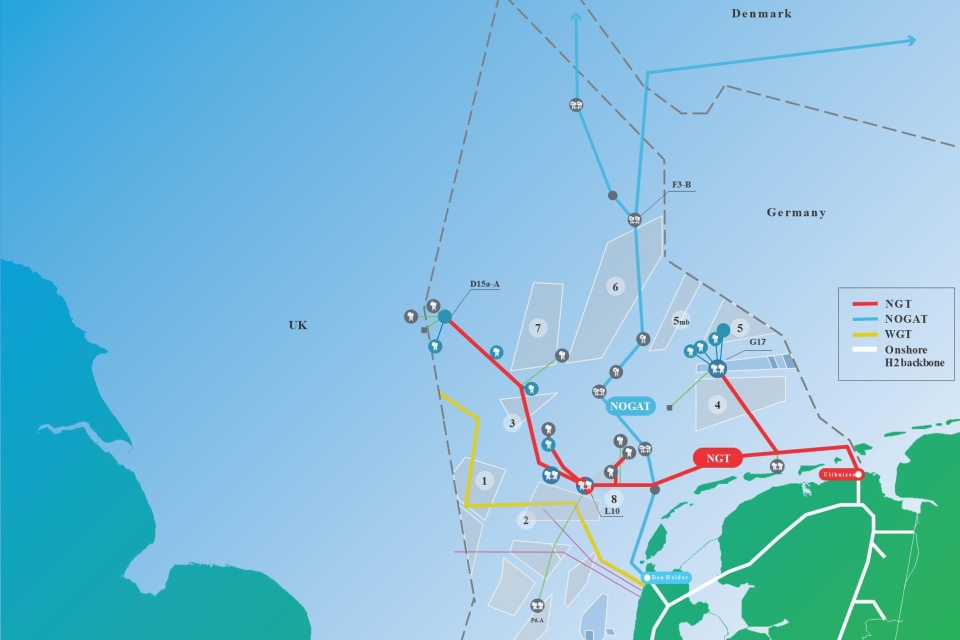 NOGAT en Noordgastransport (NGT) have published a paper on offshore hydrogen transportation through re-used natural gas pipelines in the Dutch part of the North Sea. Using existing pipelines saves cost and can speed-up the roll-out of large-scale green hydrogen production.

The ambitions for wind energy from the North Sea, and for hydrogen production, have recently been raised. By 2050, the goal is to have 70 GW of wind power generated in the Dutch sector of the North Sea. Besides electricity, offshore green hydrogen production will play an important role for locations further from the coast, as indicated in the Parliamentary Letter Offshore Wind Energy 2030-2050 dated September 16th, 2022.

In the Dutch North Sea, there are a number of large pipelines (36-inch diameter) that are suitable and can be re-used for hydrogen transport. These pipelines are conveniently located in relation to the wind (search) areas and are already connected to gas fields that could potentially be re-used for large-scale hydrogen storage in the future.

Transportation of hydrogen produced offshore through re-used existing pipelines has a number of important advantages over new pipelines: we can move faster towards the roll-out of large-scale production, and it is cheaper saving additional investment in new infrastructure. Above all, re-use has a smaller footprint and is better for ecology and the environment (the landfalls and all interconnections are already in place).

Also read: How Dutch offshore wind farm plans to store energy at the bottom of the sea

Facts and figures of hydrogen transportation by existing pipelines