Optimism about decarbonisation under threat of a China-US war 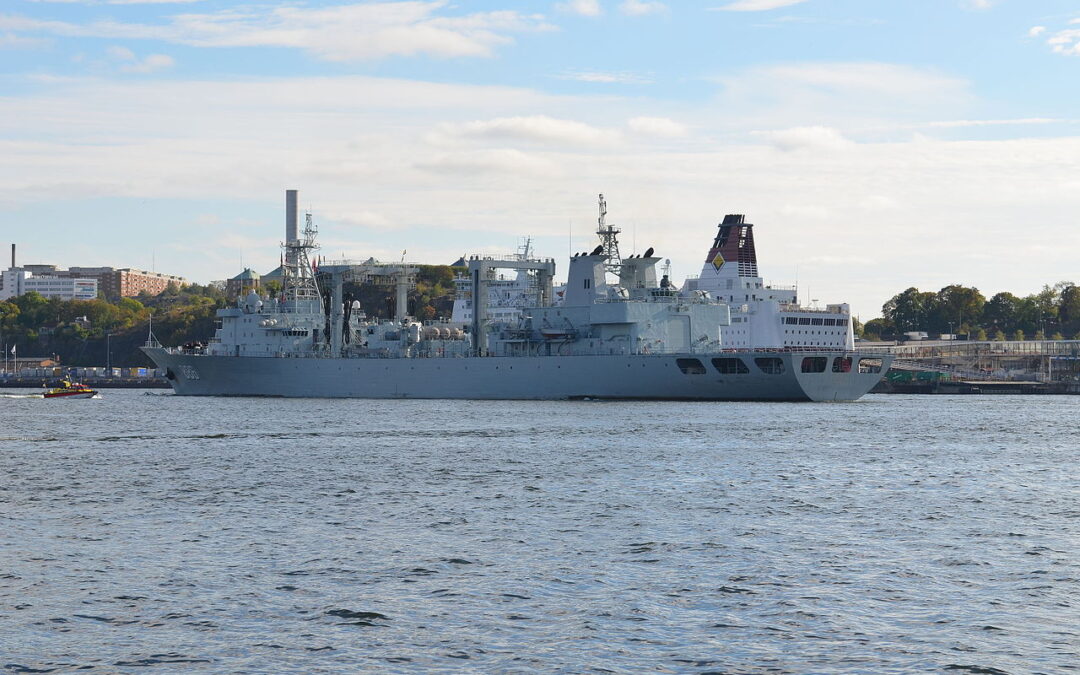 Times change for better and for worse, that much was obvious at the latest SMM, which took place from 5 to 9 September in Hamburg. Here, some 30,000 maritime professionals could meet once again after a four-year break from live exhibitions. Better times are coming as more and more technological innovations are being developed that bring us closer to a future in which ships can sail without climate-threatening emissions. The SMM was once again the showcase for manufacturers’ breakthrough innovations. On the other hand, there are very disturbing reports of Chinese plans not only to conquer Taiwan, but, just as Japan tried in 1931, to wipe out the US from the whole of South-East Asia.

In every issue of SWZ|Maritime, SWZ|Maritime’s editor-in-chief Antoon Oosting writes an opinion piece under the heading “Markets” about the maritime industry or a particular sector within it. In the September 2022 issue, he discusses some of the highlights of the SMM as well as the threat of China’s ever growing navy.

Geopolitical developments have a huge influence on shipping and shipbuilding. Until the 24th of February, citizens and most politicians in the European Union seemed to have forgotten that these industries have a decisive impact not only on our economic prosperity, but also on our freedom.

Think of the consequences for the economy of the closure of the Suez Canal by the Ever Given, the rigid Covid lockdowns that disrupted the supply chains of our industries and the threat to freedom when dictatorships like Russia, China and Iran intimidate their neighbours. Thus, it is not surprising that for the first time, two days at the SMM were set aside for the MS&D, the international conference on maritime security and defence.

The transition has begun

But let’s begin with the progress that has been made in decarbonising shipping. This transition has now definitely begun. Four years ago, disbelief and pessimism prevailed as to whether it would ever be possible to get the international shipping industry to kick its addiction to heavy fuel oil, and criticism and resistance were mainly voiced against the IMO’s and particularly the EU’s overly prescriptive coercive measures.

Now, optimism prevails about the feasibility of getting a large part of the shipping industry to switch to CO2-neutral fuels and propulsion. ‘Newbuild orders and recent industry projects prove that the maritime energy transition is accelerating. The necessary practical considerations are taking shape, and shipowners have started to future-proof their assets,’ writes Knut Ørbeck-Nilssen, CEO Maritime at DNV, the leading classification society in the shipping industry and main sponsor of the SMM, in his foreword of the latest edition of DNV’s “Flagship Report – The Maritime Forecast to 2050”.

In this report, DNV points out that ‘encouragingly, newbuild vessels are increasingly being ordered ready to run on alternative fuels, with LNG dominant for now. Substantial investment is going into researching safe and economically feasible alternative carbon-neutral fuels and into developing fuel technologies.’

‘But this will count for little if the industry and its stakeholders do not collaborate to overcome the ultimate hurdle: fuel availability,’ DNV’s Maritime CEO warns. DNV’s 6th Maritime Forecast to 2050 report zeroes in on this key issue and outlines under what conditions each new fuel type will proliferate. Which of them capture sustainable shares in the 2050 fuel mix – be it biofuels, e-fuels, or fossil fuels with carbon capture and storage – relies on sound global industry decisions and collaboration. The maritime industry must continually seek consensus with other industries to ensure that sustainable energy resources are directed to where they can reduce greenhouse gas emissions most.

DNV foresees that by 2030, five per cent of the energy for shipping should come from carbon-neutral fuels, requiring huge investments in onboard technologies and onshore infrastructure. ‘Navigating the options is complex, not least because there is no single “winner-takes-all” alternative fuel and technology. Our updated modelling points to a diverse future energy mix of carbon-neutral and fossil fuels, with the latter gradually phased out by 2050,’ Ørbeck-Nilssen writes. To get to full decarbonisation by 2050, the fuel infrastructure needs to deliver about 270 million tonnes of alternative fuels, according to DNV’s modellings.

‘We should use all available options to progress towards and reach net zero. Our findings reinforce the need for strong alliances to push the development of supply chains that can ensure fuel availability. The entire maritime value chain – charterers, energy majors, fuel suppliers, governments, financiers, ports, and shipowners – should collaborate to ensure adequate funding and apply it to the right projects. Green shipping corridors can serve as launch pads, also reducing the risk of port infrastructure becoming obsolete as the fuel mix shifts.’

In its Maritime Forecast, DNV also points out the importance of smart digitalisation for the energy transition of the shipping industry. ‘En route to decarbonisation targets, employing the full power of digital tools for more energy-efficient vessels can deliver up to fifteen per cent of GHG emission savings required by 2050. Many such tools are available, and I am confident that even more promising ones will be launched in the coming decades.’

The decarbonisation of the shipping industry is a mammoth challenge, warns Ørbeck-Nilssen, but he is ‘convinced that, together, we can build a better, greener maritime future.’

For visitors of the SMM, the importance of the fair lies above all in meeting each other again after such a long time to exchange knowledge, discuss projects and perhaps even place orders. Manufacturers use the fair to present innovations and launch new projects. Many of these projects again involve DNV, which was active not only in Hamburg, but also at Gastech 2022 that took place at the same time in Milan.

In Italy, DNV awarded approvals in principle (AiPs) to both Samsung Heavy Industries (SHI) and their Japanese counterpart, an alliance of Mitsui O.S.K. Lines (MOL) and Mitsubishi Shipbuilding (MHIMSB), for their new liquified CO2 (LCO2) carrier designs. An AiP is an independent assessment of a concept within an agreed requirement framework, confirming that it is feasible and that no major showstoppers prevent it from being realised. Just like the Koreans, MOL and MHIMSB both foresee a growing market for the transport of liquified CO2.

‘Carbon capture, usage and storage (CCUS) is gaining traction around the world as a technological solution, which helps reduce the impact of CO2 emissions. Maritime transport can play an essential role in building up an efficient CCUS value chain, which is expected to lead to an increasing demand for specialised LCO2 carriers going forward,’ says Vidar Dolonen, Regional Manager DNV Maritime Korea & Japan.

And while Gavin Allwright of the International Windship Association (IWSA) can boast an ever longer list of projects and newbuilding orders for ships with wind assisted propulsion at every conference, including the one at the SMM, Korean Daewoo Shipbuilding & Marine Engineering (DSME) and DNV signed a memorandum of understanding (MoU) in Milan to establish new wind assisted propulsion technology. This will include a rotor sail solution and fuel saving device technology, and theywill cooperate in promoting future-related businesses.

What Daewoo and DNV are researching, Japanese MOL is already putting in practice. In Hamburg, MOL showed a model of its new bulk carrier that will set sail this October with a telescoping hard sail system, the Wind Challenger. One Wind Challenger can reduce GHG emissions by about five to eight per cent. MOL also presented a model of the Wind Hunter, a ship design with large sails to generate electricity, which is converted into hydrogen with seawater. The hydrogen is unloaded in port for use in the industry or by other ships.

The threat of China

And while we in Europe, Japan and since Biden also in the US are trying to save the climate, China is building a massive navy that outclasses all other navies in the world, including that of its archenemy the US. By 2050, the Chinese navy will be bigger than all the navies around the Pacific put together.

In her presentation at the MS&D conference at the SMM, Dr Sarah Kirchberger, Head of the Center for Asia-Pacific Strategy & Security at the Institute for Security Policy of the Kiel University, outlined how fast the Chinese are enlarging their navy. According to Kirchberger, the Chinese rulers have a deep obsession with the idea of being encircled by the hostile (island) states of South-Korea, Japan, the Philippines, Vietnam, Malaysia, and Indonesia.

According to Kirchberger, some high-ranking retired Chinese military officers play with diabolical war plans. ‘As the Americans are terrified of body bags, just torpedoing one or two US aircraft carriers with a 5000 crew each would be enough to chase away the Americans from the West-Pacific. The history of the Japanese attack on Pearl Harbor threatens to repeat itself. A war for the Ukraine is nothing compared to that.’