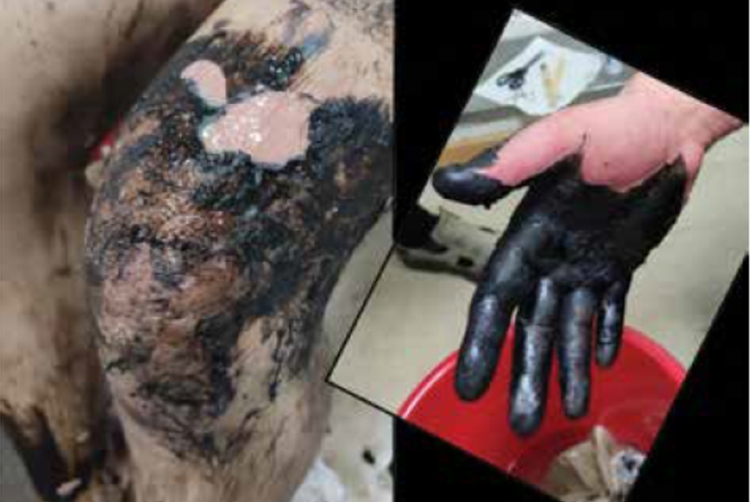 Don’t forget personal protective equipment (PPE) when carrying out maintenance tasks on board a ship an expect the unexpected. The Nautical Institute gives this advice in its latest Mars Report, in which an engineer suffered hot sludge burns.

The main engine on a bulk carrier was switched over to very low sulphur fuel oil (VLSFO) to comply with regulations. Once the engine was operating on VLSFO, the sludge discharge line of the oil separator frequently clogged, generating a “separator fail” alarm on the alarm panel. To mitigate the problem, it was decided that the oil separator was to be cleaned twice a day.

In the evening hours, the engineer on duty received a “separator fail” and a “fuel oil bowl leak” alarm on the computer. The vessel was rated as UMS (unattended machine space) and there were no engineers in the machinery space at the time. Experience to date indicated that this alarm was a consequence of the contamination and clogging of the separator bowl at the discharge line. As per procedures, the engineer informed the bridge that he was going to the engine room.

Procedures also specified that two crew should always enter the engine space together. Despite this, the engineer on duty entered the space alone, and did not put on his coveralls and gloves as he entered the engine room – again contrary to procedures. Having transferred to the standby separator and shut the alarming separator, he opened the plug of the inspection hole of the sludge discharge line to verify the condition. The discharge line was completely blocked, so this did not decrease the pressure between the blockage and the bowl opening. Hot (40°C) sludge oil gushed out of the inspection hole and covered the engineer’s arms and legs.

The victim called for assistance and other crew arrived. They attempted to wash the sludge off the engineer’s hands at the washstand, but the sludge was sticking to his skin. He was escorted to the ship’s hospital and pain-killers were prescribed. After consultation, the master decided to evacuate the victim at the nearest port, approximately 250 nm from the vessel’s location. In the shore hospital, it was twelve per cent% of the victim’s skin surface had been covered in sludge, mostly on his arms and legs.

Also read: Always carry out a risk assessment when working with hot bitumen