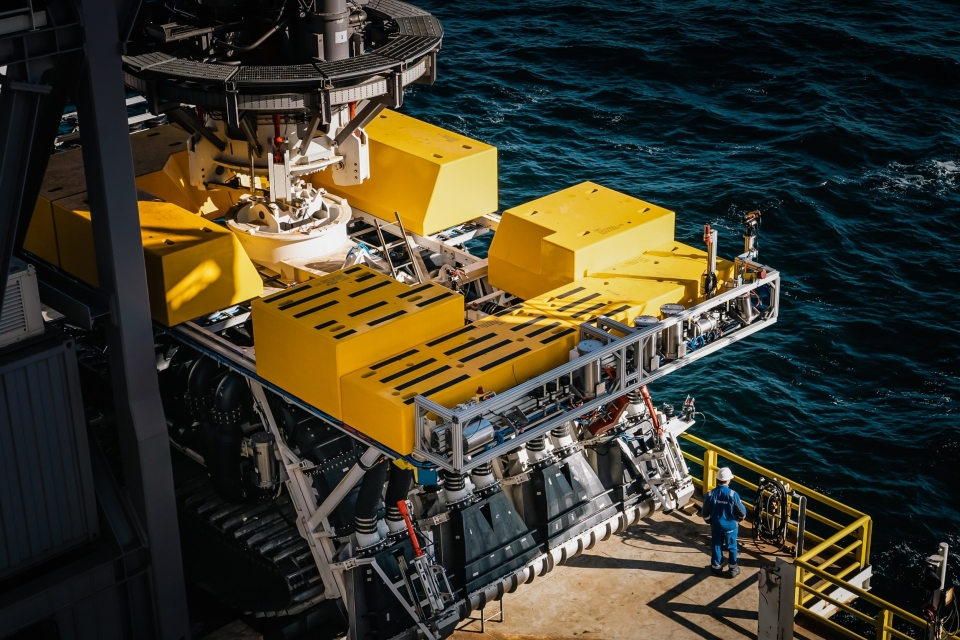 Allseas’ Hidden Gem is heading for port with its hold full of polymetallic nodules following the completion of a two-month deepsea mining test programme in the Pacific Ocean. It is the first time a fully integrated nodule collection system including riser has been tested in the Clarion Clipperton Zone since the 1970s.

A team of 130 engineers on board the Hidden Gem conducted the trial across a small test area in NORI-D. The milestone comes three years after Allseas signed a strategic alliance with The Metals Company (TMC), formerly DeepGreen, to recover nodules responsibly from the deep ocean floor.

The trials concluded with a series of full-scale production runs, which netted a record haul – an estimated 4500 tonnes – of mineral-rich polymetallic nodules. Over 3000 tonnes were transported up a 4.3-km-long riser system to the surface production vessel, Hidden Gem, while the additional 1500 tonnes of nodules were purposely left behind on the seafloor as part of the trials.

Engineers drove the pilot collector vehicle across over 80 kilometres of the seafloor to collect these. A sustained production rate was reached of 86.4 tonnes per hour.

The expedition, in the Clarion Clipperton Zone (CCZ) of the Pacific Ocean, rounds off a highly challenging and demanding two-year development, fabrication and testing cycle. During the historic deep-sea trials, engineers drove the pilot collector more than 83 kilometres across the ocean floor, and transported thousands of tonnes of nodules via a 4.3-kilometre riser system to the surface production vessel Hidden Gem.

Project manager at Allseas, Rutger Bosland says both the system and those behind it have exceeded expectations: ‘By tapping into our offshore capability and deepwater expertise, we have pioneered groundbreaking technology that we are confident can play a key role in support of the energy transition. I want to congratulate the team on this outstanding achievement.’

The trials presented a unique opportunity to dozens of marine experts and scientists to conduct extensive environmental impact analysis and research from a dedicated monitoring vessel.

Scientists deployed remotely operated vehicles (ROVs) and autonomous underwater vehicles (AUVs) equipped with audio, video and water-quality-measuring devices to survey, monitor and sample sediment plumes, the mid-water discharge of water from the riser system used to transport nodules from seafloor to the Hidden Gem, and noise levels generated by nodule collection and transport operations. The team deployed an array of over fifty subsea sensors on seafloor landers and mid-water moorings to do this.

With the conclusion of the trials, Allseas has proved it can deliver the technology to recover seafloor minerals responsibly from 4.5 kilometres beneath the ocean’s surface. The next step is to upgrade the system to ensure it is capable of full-scale production. This will include additional collector heads and a wider diameter riser pipe to achieve a production rate of over 200 tonnes per hour.

The wealth of environmental data collected will form the basis of NORI’s application to the International Seabed Authority for an exploitation contract. TMC expects this application to be ready for submission in the second half of 2023. Insight gained from the data will also offer opportunity to advance the design further.

In March 2022, Allseas and TMC announced that the pilot nodule collection system would be scaled up to commercial level. The target is a production capacity of 1.3 million tonnes of wet nodules per year, with the upgraded system expected to be ready by Q4 2024.

Pictures by Allseas and TMC.