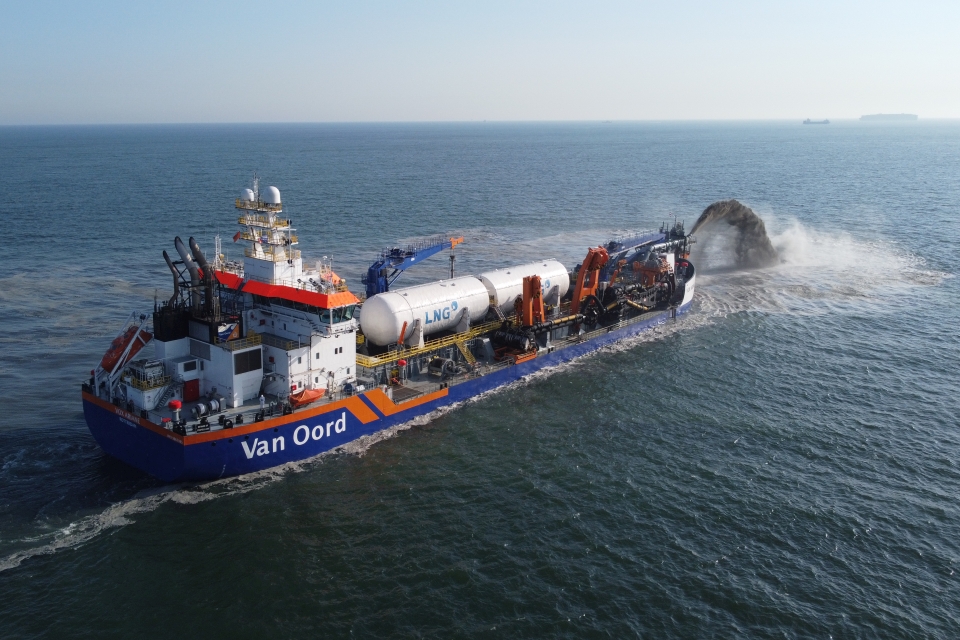 ‘With the commissioning of three state-of-the-art trailing suction hopper dredgers, Van Oord is showing what sustainability and efficiency are going to mean for large seagoing vessels and what mindset that requires from the builder.’ With these fine words from the jury, Van Oord was presented with the KVNR Shipping Award.

The award was presented tonight (7 November) at the Maritime Awards Gala at De Doelen in Rotterdam in the presence of about 700 maritime professionals.

Van Oord‘s three new trailing suction hopper dredgers are innovative and modern vessels of own design. Unprecedented steps have been made and combined to contribute to the sustainability goals of the Dutch shipping industry. Savings have been made on weight and ship design has been optimised. Automation is smarter and remote monitoring can be improved. Van Oord is thus not only showing that the sector is very consciously choosing to sail cleaner and safer. It also shows the family company’s intrinsic motivation to contribute to a better world.

The three ships – the Vox Ariane, Vox Apolonia and Vox Alexia – will sail under the Dutch flag and are the latest additions to the fleet powered by the proven transition fuel LNG. Operating on LNG results in low emissions, but when operating on marine gas oil (MGO), the ships also comply with IMO Tier III. Moreover, there is innovative use of dual-fuel engines; both engines can independently run on both BOG (boil-off gas) and liquid LNG or MGO in any combination.

The jury adds: ‘The three sister ships set the tone for national shipbuilding, not least because of the efficient use of residual cold and heat for onboard climate control. Triple innovation.’

The other nominees for the KVNR Shipping Award 2022 are:

The Maritime KVNR Shipping Award has been established by the Royal Association of Netherlands Shipowners (KVNR) to honour an organisation or individual who, through innovation, has helped the shipping industry in the Netherlands most over the past year. Since last year, it is no longer about technical innovation, but the award is now focused on, preferably Dutch, organisations and individuals who have played a distinctive role in an innovative way to the benefit of Dutch shipping.

Also read: And the nominees for the Dutch Maritime Awards 2022 are…