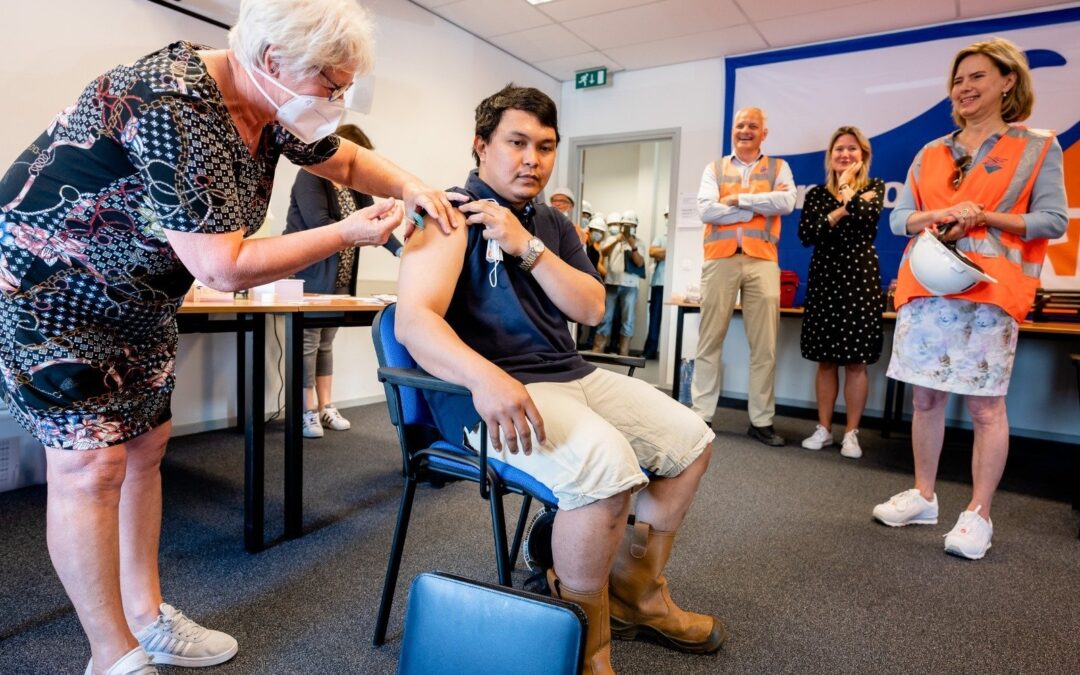 The Netherlands was the first country with an extensive vaccination programme specifically designed for seafarers. The KVNR feels that this has been of immense value to the Dutch shipping industry and therefore awards its annual prize, the Maritime KVNR Shipping Award to the Dutch National Institute for Public Health and the Environment (RIVM) for organising this programme.

Under the leadership of Nils van der Kolk (RIVM), a project to vaccinate seafarers, a so-called “hard-to-reach target group” that cannot participate in the regular national vaccination strategy, started in the spring of 2021.

Due to the international activities, the international character of the crew composition on board of the sea-going vessels and the limited time seafarers spend in the Netherlands, tailor-made solutions were needed. Therefore, a vaccination programme was set up under which seafarers, regardless of nationality, are eligible for the one-prick ‘Janssen’ vaccine. This has helped many seafarers to continue their work safely and has helped companies to be of value to their crews in uncertain times.

In addition to the RIVM, the KVNR had also nominated the Dutch Human Environment and Transport Inspectorate (ILT) for establishing the “Contingency plan Covid-19 the Netherlands” for the shipping industry. The ILT staff acted quickly and pragmatically in the spring of 2020 by creating a Contingency Plan (CP) for the shipping industry. As a result, expired certificates of seafarers and sea-going vessels were generically renewed, even several times to this day.

This was necessary because seafarers could hardly travel to renew their certificates. With this, the Netherlands was one of the first countries worldwide with such a generic extension. With this action, the ILT has had an eye – for as long as necessary, pragmatic, fast and solution-oriented – for the difficult position of shipowners and seafarers in 2020 and 2021.

The third nominee was the Dutch Maritime Museum, which sought to make the impact of Covid-19 on shipping visible by gathering stories from the perspective of the seafarers affected by it. The collection of material and the recording of stories, so that this impact on shipping is included in the collective Dutch memory, is also relevant for the future. With this, and with its large reach, the Maritime Museum has taken up a fitting role to tell the story of seafaring in these exceptional circumstances and feels responsible for it.

The Maritime Awards Gala on 1 November at De Doelen, Rotterdam, the Netherlands, once again saw the presentation of five maritime awards. In addition to the KVNR Shipping Award, these were the KNVTS Ship of the Year Award, the Maritime Innovation Award, the Maritime Designer Award and the Royal Netherlands Navy (RNLN) Van Hengel-Spengler Award. Almost 900 maritime professionals, politicians and press attended the event.

The Maritime KVNR Shipping Award has been established by the Royal Association of Netherlands Shipowners (KVNR) to honour an organisation or individual who, through innovation, has helped the shipping industry in the Netherlands most over the past year. Nevertheless, there have been some extraordinary and significant developments since the last edition of the award in 2019. It is no longer about technical innovation, but the award is now focused on, preferably Dutch, organisations and individuals who have played a distinctive role in an innovative way to the benefit of Dutch shipping.

Picture: In June, the first vaccinations were given as part of the seafarers’ vaccination programme. Cora van Nieuwenhuizen, then Minister of Infrastructure and Water Management, attended the event (photo by KVNR).