How an offshore supply vessel collided twice in 45 minutes 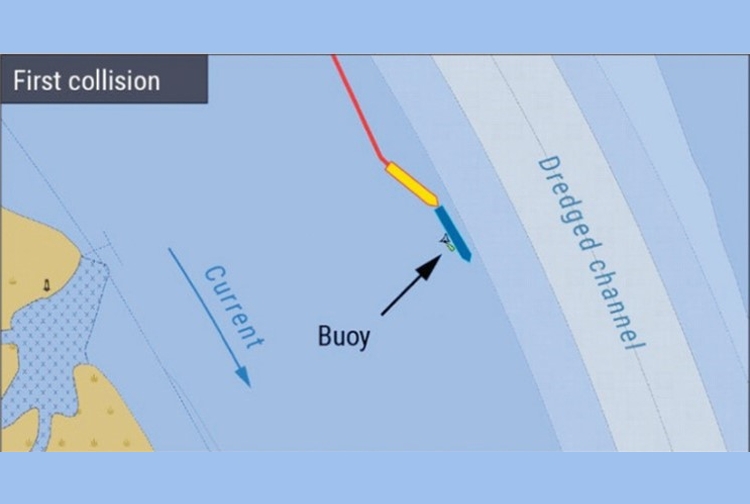 Too many assumptions and too little communication can lead to bad outcomes. That is what The Nautical Institute has to say about an accident in which an offshore supply vessel collided with a Coast Guard buoy tender twice in 45 minutes. The incident is covered in the latest Mars Reports.

A Coast Guard buoy tender was working in a restricted river waterway to service buoys that were shifted or missing due to a recent hurricane. The bridge team consisted of, among others, two officers and the master. It was full daylight and visibility was good. The tender, displaying day-shapes for a vessel restricted in her ability to manoeuvre, was working near the edge of the navigable channel with the ebb current astern.

An offshore supply (OSS) vessel left berth upstream of the buoy tender and was outbound. Around this time, the buoy tender crew had secured a large buoy on deck; the crew were heaving in the chain while an officer on the bridge used the DP system to position-check the deadweight anchor.

A safety officer on the deck of the buoy tender radioed the bridge about the impending collision. The commanding officer made a ship-wide announcement to prepare the crew for collision while the conning officer sounded five short blasts on the ship’s whistle.

The master attempted to manoeuvre around the buoy tender’s stern but the ebb current set the OSS vessel onto the stationary Coast Guard vessel. Recognizing that a second collision was imminent, the buoy tender’s master made another ship-wide announcement warning the crew to brace for impact. The offshore supply vessel’s starboard bow struck the tender’s starboard quarter.

The investigation found, among other things, that;