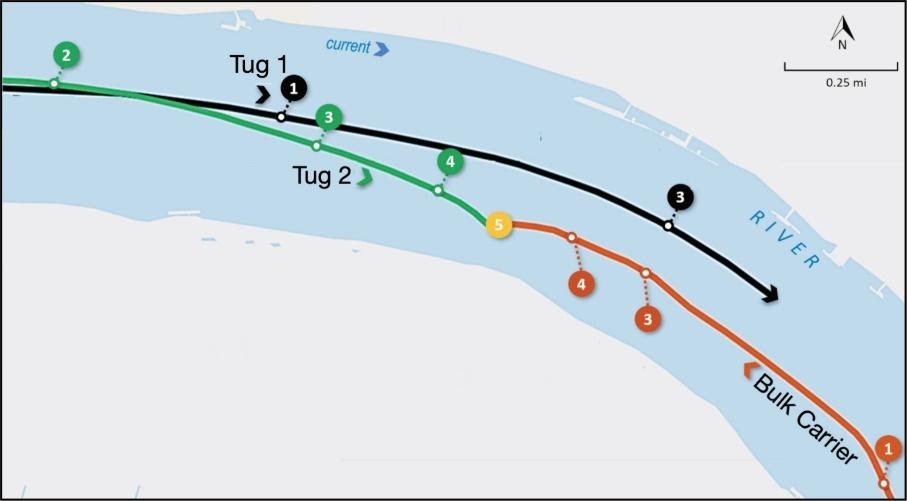 In its latest Mars Reports, The Nautical Institute discusses a bulk carrier and tug boat collision in broad daylight. The organisation says it is another example of a vessel operator making an assumption about the intentions of another vessel operator leading to a bad outcome and stresses unambiguous communication is essential to ensure safety.

In daylight and good weather a bulk carrier was in ballast and up-bound in a river. A down-bound tow vessel’s operator called the pilot of the bulk carrier to arrange a starboard-to-starboard meeting. This was as per local regulations that require the down-bound vessel, with the current astern and with the right of way, to contact the up-bound vessel and propose the manner of passage. The vessels agreed a starboard-to starboard meeting and met without incident, but another down-bound tug was approaching and had not yet made meeting arrangements.

On the bulk carrier, the pilot assumed the second down-bound tug would require the same meeting as did the first, that is starboard-to starboard.

However, this was not the intention of the tug operator and he did not call the bulk carrier to make his intentions clear. For the next 85 seconds, the situation continued to develop in an ambiguous manner until the bulk carrier pilot called the tug to confirm what he thought would be a starboard-to-starboard meeting.

The tug operator was taken by surprise by this suggestion, as he had assumed a port-to-port meeting. In his opinion, the vessels were now too close to execute a starboard-to-starboard meeting safely. He initiated an emergency avoidance manoeuvre to starboard without informing the bulk carrier’s pilot. About thirty seconds later, the two vessels collided.

This accident was covered in the Mars Reports, originally published as Mars 202103, that are part of Report Number 339. A selection of this Report has also been published in SWZ|Maritime’s February 2021 issue. The Nautical Institute compiles these reports to help prevent maritime accidents. That is why they are also published on SWZ|Maritime’s website.