Is there still a future for LNG as a shipping fuel? 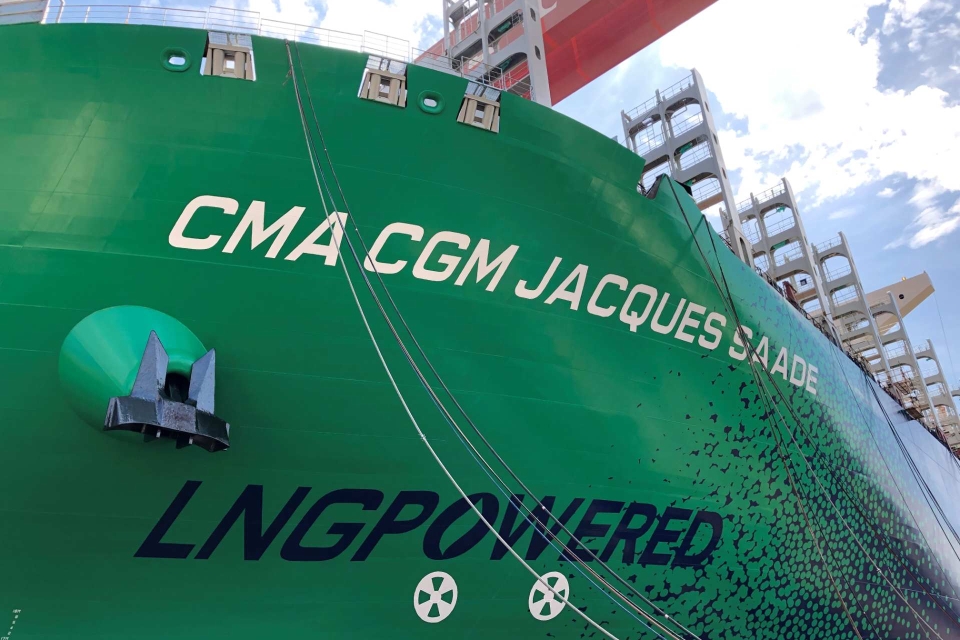 Last month, a vigorous discussion unfolded, also among SWZ’s editors, about the future of LNG as a fuel for shipping. The environmental movement interprets the energy transition and the pursuit of zero-emission shipping as a complete ban on the use of fossil fuels (decarbonisation) and, thus, also the use of liquefied natural gas (LNG). But wasn’t the main concern avoiding the release of climate-threatening greenhouse gases into the atmosphere?

In every issue of SWZ|Maritime, SWZ|Maritime’s editor-in-chief Antoon Oosting writes an opinion piece under the heading “Markets” about the maritime industry or a particular sector within it. In the October 2022 issue, he discusses the use of LNG in shipping.

And then, even for the use of LNG, there are more and more technical solutions on the market to capture, reuse or store the greenhouse gas CO2 and to limit the escape (methane slip) of unburned gas (methane). This might be a less expensive solution than the development and production of e-fuels that also require a lot of energy to produce.

Shipping companies make different choices in alternative fuels to avoid the use of heavy fuel oil. From these alternative fuels, LNG was the first. The biggest advantage is that it burns cleaner (less SOX and NOX and fewer particles), but it still emits CO2 (albeit 23 to 28 per cent less than conventional fuels).

The biggest promotors of the use of the cleaner burning LNG have organised themselves in SEA-LNG. Members are industry-leading companies like TotalEnergies, Shell, Qatargas, several big ports worldwide and shipping companies like especially Carnival Corporation, Matson, Tote Maritime, NYK Line and ZIM, engine manufacturer Wärtsilä and the three biggest classification organisations DNV, ABS and Lloyd’s Register. Bureau Veritas used to be a member as well, but can’t be found on the website anymore. The same is true for engine manufacturer Mitsubishi Corporation.

Besides the members of SEA-LNG, there is a range of shipping companies that already operate or have ordered new ships with LNG-ready or fully LNG-burning engines. SEA-LNG reports that, based on shipping data delivered by DNV, there are 316 LNG-operated ships in operation at the moment with another 511 on order. 229 LNG-ready ships are currently in operation or on order.

CMA CGM is one of the world’s biggest backers of LNG as a fuel and said in June this year its fleet would grow to at least 44 vessels by the end of 2024. At home, Spliethoff Group and dredging company Van Oord have ships running on LNG built or on order.

From the big liner companies, next to French champion CMA CGM, it is German Hapag Lloyd and Japanese NYK Line and MOL that run and order ships on LNG. Also, a lot of ferries in the Baltic and on the North Sea use LNG for their propulsion.

LNG as a transition fuel

The clean transport NGO Transport & Environment (T&E) expects that by 2030, a quarter of EU shipping will run on LNG, locking in fossil fuels for decades. According to T&E, the actual EU policies to clean up shipping will lead to replacement of conventional marine fuels with fossil LNG, with little benefit to the climate.

‘The old narrative of gas as a transitional fuel just doesn’t hold. We cannot afford to shift from one fossil fuel to another. It will not get us to zero emissions by 2050 and, by putting more methane into the atmosphere, may even fry the planet faster,’ Delphine Gozillon, sustainable shipping officer at T&E, said.

The EU targets, which are tightened over time, are designed to gradually squeeze out the most polluting oil-powered ships, and, in theory, drive the uptake of sustainable fuels. Instead, they will be replaced by fossil LNG-powered ships, which the regulation gives the green light to well into the 2040s, T&E said. According to the report, with costs far cheaper than genuinely clean alternatives, LNG will make up 23 per cent of the total energy used in EU shipping by 2030, up from six per cent today.

As the Commission proposal stands, ships will have little or no incentive to switch to more sustainable alternatives, such as green hydrogen or hydrogen-based fuels known as “e-fuels”. Currently, there is no mandate for e-fuels, meaning shipowners can rely on fossil LNG and dubious bio-fuels to meet EU targets into the 2040s.

Also read: T&E: ‘Quarter of EU shipping will run on LNG by 2030 locking in fossil fuels for decades’

But perhaps the biggest blow to the shipping industry came on 22 September when studies from UCL’s Energy Institute and the International Council on Clean Transportation highlighted the potentially heavy cost and environmental impact of LNG as a transition fuel. With multiple market forces fuelling an orderbook increasingly made up of LNG-fuelled ships, the combined LNG-burning fleet operational in 2030 is at risk of financial losses of USD 850 billion, according to UCL researchers.

The UCL study, in line with many others, shows a boom in ordering of LNG vessels over recent years, with 65 per cent of the newbuilding deliveries by 2025 capable of running on LNG, up from only ten per cent a couple of years ago.

‘Shipowners and financiers should consider not ordering LNG-capable ships and investing in conventionally fuelled ships that are designed for retrofit to zero-emissions fuels. For existing LNG-capable ships, investors should consider ways to manage the risk of stranded value – eg. factoring in the cost of retrofit or other actions to remain compliant at the point of newbuild or using a steeper than linear depreciation curve,’ the study said.

Also read: Coalition to tackle methane emissions to minimise the impact of LNG in shipping

In response to the UCL report, SEA-LNG called the case study a flawed academic exercise, detached from reality. ‘In setting out a framework for their analysis, the authors make innumerable contestable and unsupported statements. Somewhat confusingly, given the focus of their paper on stranded value risk, they ignore the fact that LNG dual-fuel engines already provide shipowners with an insurance against stranded assets, as they can burn traditional marine fuels and are currently doing so in Europe because of the unprecedented spike in LNG prices.’

According to SEA-LNG, UCL’s analysis is based on an assumption that the decarbonisation pathway offered by LNG via bio-LNG in the medium term to synthetic, or e-LNG, in the long term, will be less ‘competitive’ than ammonia or other electro- fuels.

‘This is highly problematic for a number of reasons. Predicting the future production costs of electrofuels such as e-ammonia, e-methanol and e-LNG is extremely difficult given that eighty per cent of the cost of producing these fuels is associated with the cost of producing the common renewable hydrogen feedstock. This can only be produced from renewable energy sources, which will take years to develop to the necessary scale. Suggesting a particular electro-fuel will “win” based on price, is reckless and is, at best, a guess at this point in time,’ SEA-LNG wrote.

In the meantime, a coalition of top shipping names has launched a project to identify, accelerate and advocate technology solutions to measure and manage methane emissions. Maran Gas Maritime, Mediterranean Shipping Company (MSC), Carnival Corporation, Seaspan, Shell, Lloyd’s Register and Knutsen have come on board the Methane Abatement in Maritime (MAM) Innovation Initiative, which aims to minimise the environmental impact of LNG in shipping, whilst aiding the transition to future fuel solutions. MAM will seek to identify and pilot new technologies to monitor and reduce methane slip from vessels fuelled by LNG.

The proponents of the use of LNG for shipping can count on the backing of oil and gas giant Shell that says it will be able to reduce methane slip on its vessels powered by LNG to ‘negligible levels’ after 2024 as it makes the ‘right engine choices’ and deploys new abatement technology under development. The oil major and top five charterer of tankers is installing engines with the lowest levels of methane slip on its LNG-fuelled fleet of tankers and gas carriers under construction, according to Carl Henriksen, Shell Shipping and Maritime’s general manager for technology, innovation, and digitalisation.

In addition, Shell itself is testing and plans to adopt the latest abatement technology available on its own ships to mitigate emissions of the most potent greenhouse gases in shipping. Regulators are increasingly examining the contribution of methane to greenhouse gas emissions in shipping as the number of ships powered by LNG – which is liquefied methane – begins to rise. Engines selected for 22 of the oil company’s LNG carriers are high-pressure diesel cycle engines, which have almost imperceptible levels of methane slip, according to Henriksen.

Amid such developments, LNG’s uptake as a marine fuel is expected to spike, according to S&P Global Commodity Insights. Earlier in September, S&P Global’s reference case estimated that petroleum-based fuels will account for ninety per cent of global bunker demand in 2030, with LNG 7.8 per cent and alternatives 2.2 per cent, adding that LNG’s uptake could increase to twelve per cent in 2050.

In its higher uptake scenario, based on companies expediting their CO2 targets and regulators implementing more restrictive environmental laws, S&P Global estimated alternative fuels at 39 per cent, LNG at 32 per cent, LPG at one per cent, and oil-based fuels at 28 per cent of the total bunker consumption in 2050.