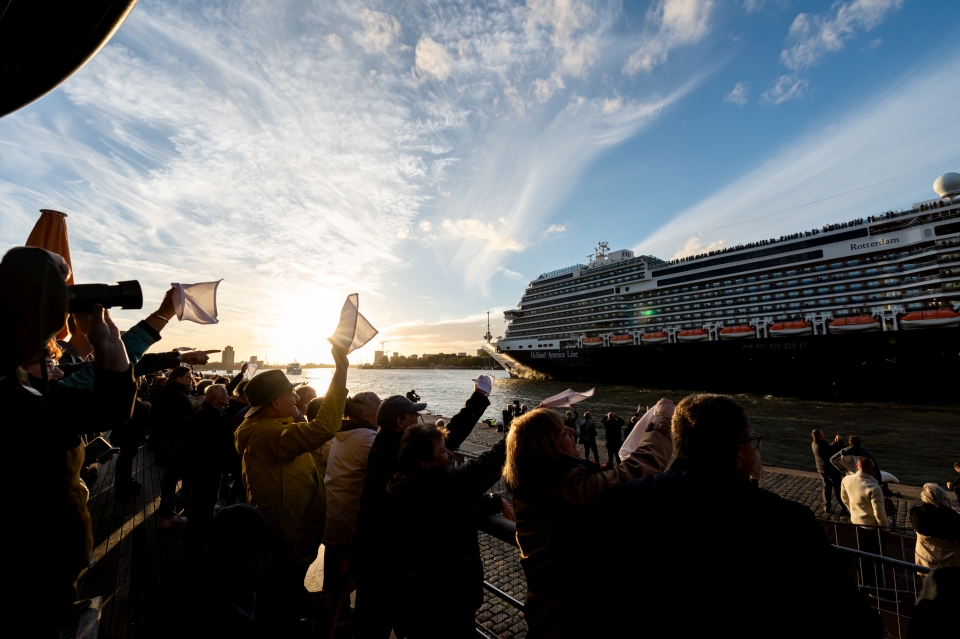 Holland America Line’s ship Rotterdam VII departed the city of Rotterdam on 15 October on a transatlantic crossing. It is a reenactment of the fifteen-day maiden voyage of the cruise company’s first Rotterdam, 150 years ago. The crossing ends in New York, with stopovers in Le Havre, France, and Plymouth, England.

To celebrate this anniversary, Holland America Line invited fans to come to Cruise Port Rotterdam and the Wilhelminapier for a festive gathering. Here, a departure from bygone days was recreated. A floatilla in collaboration with the Dutch Koninklijke Zeil & Roei Vereniging (Royal Sailing & Rowing Association) and steamers from the Maritime Museum accompanied the ship during the departure. Partygoers were handed out special anniversary handkerchiefs to wave the ship off at the quay.

‘Today is a historic day as the very first Holland America Line ship embarked on its maiden voyage to New York 150 years ago,’ said Antorcha. ‘From that time, we have transported immigrants and holidaymakers, soldiers and refugees, and built a reputation for welcoming our guests in an extraordinary way and caring for them as if we were welcoming them home.’

Antorcha joined dignitaries from the city and port in a special ceremony honouring the shared history. The crossing is dedicated to Holland America Line’s history.

That is why a special exhibition has been created. The restaurants on board will pay extra attention to the anniversary by serving special dishes. In addition, there will be exclusive entertainment. Upon arrival in New York on 26 October, the festivities will continue with a special anniversary performance at World Stage by Lincoln Center Stage performers.

On 6 April 2023, the Rotterdam will make another transatlantic voyage from New York. The ship will arrive in Rotterdam on 18 April, the cruise line’s 150th anniversary.