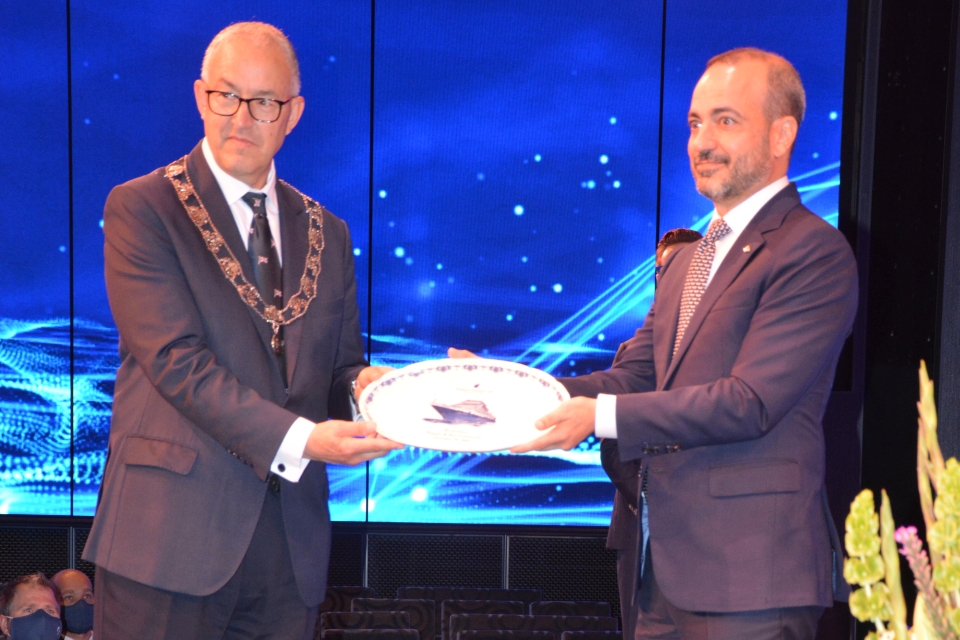 Holland America Line celebrated the first arrival of its new cruise ship Rotterdam VII to the city it was named after on Friday the 15th of October. The Mayor of Rotterdam, Ahmed Aboutaleb, attended the plaque and key ceremony. Christening and the official naming ceremony will take place in Rotterdam in spring 2022.

A plaque and key ceremony is a tradition for vessels on their maiden call to a port. During such a ceremony, government or port officials come on board a ship to welcome it after which the ship receives a plaque, which is often displayed somewhere on board. The term key stems from medieval times, when ships conducting business were given keys to the city walls. During the ceremony on Friday, it was announced that HRH Princess Margriet of the Netherlands will be the Godmother of Holland America Line’s newest flagship and biggest ship ever.

The ship was built at Fincantieri’s Marghera shipyard and had already been delivered to the cruise line on 30 July. So far, the Italian shipyard has built seventeen ships for the brand.

The new cruise ship is a sister ship of the Koningsdam and Nieuw Statendam, the Pinnacle class ships delivered respectively in 2016 and 2018 from the same shipyard, and is the fourteenth ship built for this brand by the Marghera shipyard. It is about 99,800 gross tonnes, almost 300 metres long, with accommodation for 2668 passengers in 1340 cabins. Rotterdam is characterised by a modern and contemporary style. Tihany Design and Yran & Storbraaten produced the interior design for all three Pinnacle class ships.

History of the name Rotterdam

Holland America Line’s first ship was Rotterdam, which sailed its maiden voyage from the Netherlands to New York on October 15, 1872, and led to the founding of the company on April 18, 1873. Rotterdam II was built in 1878 for British Ship Owners Co. and purchased by Holland America Line in 1886. Rotterdam III came along in 1897 and was with the company until 1906. The fourth Rotterdam joined the fleet in 1908 and also served as a troop carrier when World War I ended. Following the war, it made regular cruises from New York to the Mediterranean.

Rotterdam V, also known as The Grande Dame, set sail in 1959 and began sailing transatlantic crossings with two classes of service. It later converted to a one-class ship in 1969. It sailed with Holland America Line for 38 years until 1997, including several Grand World Voyages, and currently is a hotel and museum in the city of Rotterdam. Rotterdam VI, the most recent to cruise for Holland America Line, was introduced in 1997 as the first ship in the R Class.