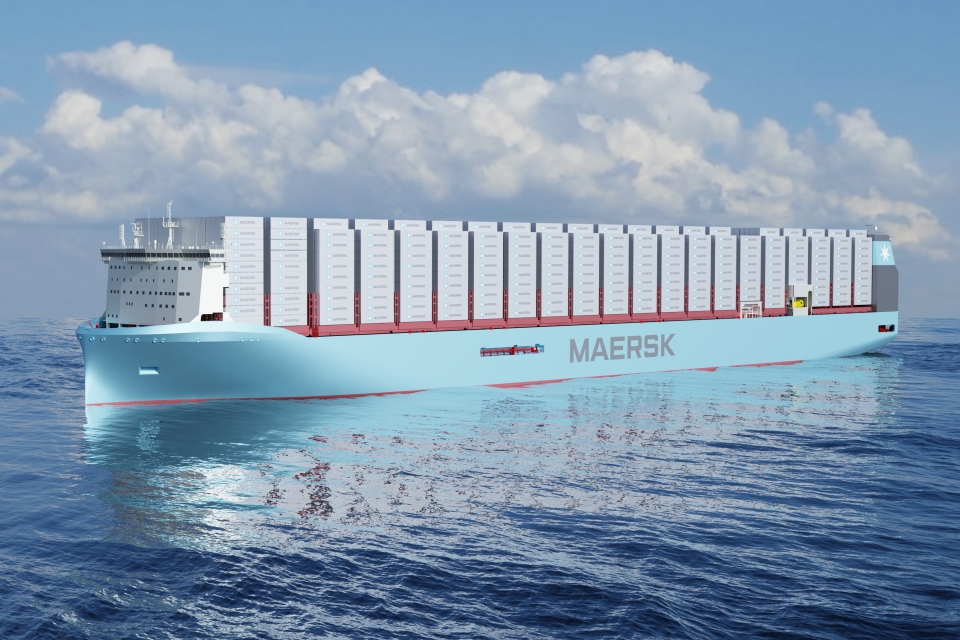 A.P. Moller-Maersk has ordered a further six large ocean-going vessels that can sail on green methanol. The six vessels will be built by Hyundai Heavy Industries (HHI) and have a nominal capacity of about 17,000 TEU. They will replace existing capacity in the fleet.

Maersk has set a net-zero emissions target for 2040 across the entire business and has also set tangible near-term targets for 2030 to ensure significant progress. This includes a fifty per cent reduction in emissions per transported container in the Maersk Ocean fleet compared to 2020 and a principle of only ordering newbuilt vessels that can be operated on green fuels.

The six new 17,000-TEU vessels are all to be delivered in 2025 and will sail under the flag of Denmark. They all come as part of Maersk’s ongoing fleet renewal programme and their capacity will replace an equal amount of capacity reaching end-of-life and leaving the Maersk managed fleet.

With the order, Maersk has in total ordered nineteen vessels with dual-fuel engines able to operate on green methanol.

‘Green methanol is the best scalable green fuel solution for this decade, and we are excited to see several other shipowners choosing this path,’ says Palle Laursen, Chief Fleet & Technical Officer at Maersk. ‘It adds further momentum to the rapid scaling of availability needed to bring down the premium on green methanol and accelerate the evolution of climate neutral shipping.’

Benchmarked against conventional fuel capabilities, additional capital expenditure (CAPEX) for the methanol dual-fuel capability is in the range of eight to twelve per cent, which is an improvement compared to when Maersk ordered eight vessels with the same technology last year.

When all nineteen vessels on order are deployed and have replaced older vessels, they will generate annual CO2 emissions savings of around 2.3 million tonnes. The six 17,000 vessels running on green methanol will save about 800,000 tonnes of CO2 emissions annually.

Maersk has reiterated its strategy that it wants to maintain a fleet capacity at a maximum of 4.3 million TEU, as a combination of Maersk managed and time-chartered vessels.

‘Our customers are looking to us to decarbonise their supply chains, and these six vessels able to operate on green methanol will further accelerate the efforts to offer our customers climate neutral transport,’ says Henriette Hallberg Thygesen, CEO of Fleet & Strategic Brands at Maersk.