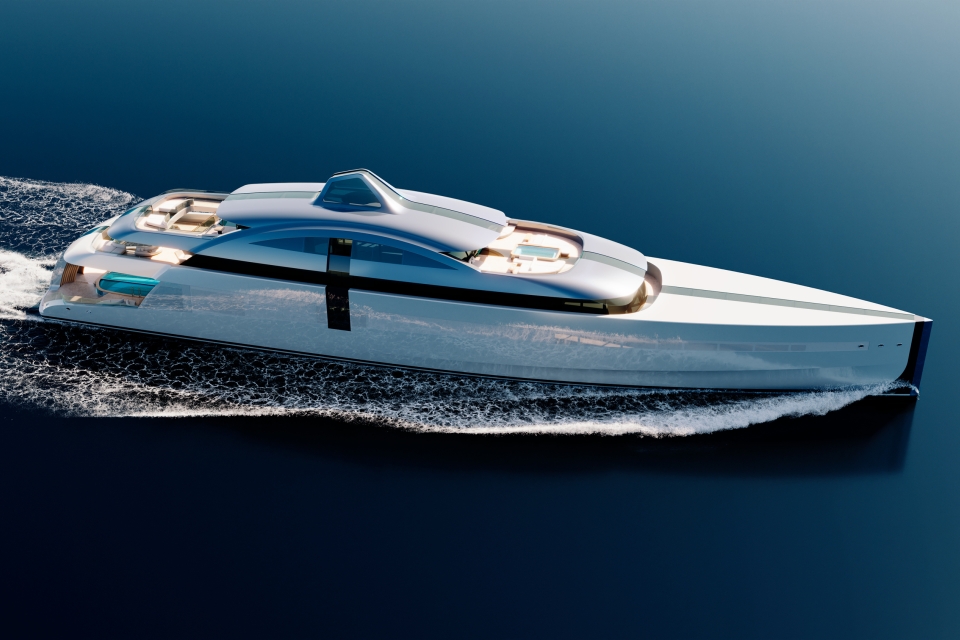 At this year’s Monaco Yacht Show, Feadship has unveiled its eleventh revolutionary concept yacht Slice. It is a revolutionary 85-metre yacht that tackles one of the biggest owner grievances in yacht design: long hallways, dark interiors and stacked living spaces. In addition, the yacht can sail on methanol.

Engineered with a glass strip running entirely from bow to stern, allowing for natural light to filter in through multiple decks, Slice ‘turns the inside out and the outside in,’ say Studio De Voogt Lead Designer Chris Bottoms and Head of Design Tanno Weeda. Feadship premiered the game-changing yacht at the opening of the Monaco Yacht Show.

Instead of offering a few new features or showcase a single new technology, Feadship set out to completely reimagine a yacht from inside out. In simplest terms, the designers sliced their CAD model right down the centreline and pushed the halves apart to make room for a strip of glass running from bow to stern. It is not glass alone, but glass overlaying a structural framework that lets natural light filter through multiple decks. It is a far more challenging plan than a series of skylights; it redefines the relationship between spaces throughout the interior of the yacht.

Atrium at its core

The brief to the engineer and design team was to challenge the very zeitgeist of typical yacht layouts by investigating natural light and vertical spaces. More specifically, the brief asked for a linear ‘transition from the mountain to the sea’.

Having a slice running down the middle opens up countless spatial and lighting possibilities. Corridors become so much more than just hallways transitioning from one space to another – they have their own purpose and become enjoyable spaces in their own right.

The heart of the yacht is the monumental 70 m2 atrium at main deck level. Uninterrupted by a staircase, the atrium is more than a lobby, but a destination in its own right for guests moving fore and aft. Its cascading circular balconies open a wide range of possibilities for lighting and art installations.

Slice’s propulsion system will be powered by four dual-fuel generators, which have been modified to run on both methanol and non-fossil diesel (hydrotreated vegetable oil – HVO) and the generated power will be delivered to two Azimuthing pods. The HVO is to be used as pilot fuel to assist with the combustion of the methanol.

Due to the lack of worldwide supply points of methanol, a larger than required HVO capacity has been accommodated to increase the range of HVO-only sailing. This allows the methanol to be used sparingly when running low until the next methanol supply point is reached and also enables global cruising.

The option of replacing one of the generators with methanol fuel cells exists, which would generate power to contribute to the hotel load of the vessel. A battery array, supplied with power from both generators, and the fuel cells allows for low speed, silent cruising and for peak shaving of the generators.

Another striking feature of Slice is a 10-metre-long pool designed using data science. Often used to determine hull efficiency, comfort at sea and at anchor calculations, the design team embraced data science to define the pool’s shape and placement of hidden dampers to conquer slosh.

‘The strips we bonded to the main girders of a wheelhouse deck are two times higher stiffness than steel, but are lower in weight than aluminium.’ The material is already being used in Feadship’s yards, giving the design team the confidence to integrate it into the atrium, multi-level walkways and the framework for the long glass insets on Slice’s top deck.

To conceptualise Slice’s interior, Feadship turned to Dutch designer Marco van Ham and asked him to avoid teak entirely. Instead, Van Ham and his team brought in a palette of backlit marbles and onyx, surfaces formed of liquid metals, silver leaf, shagreen, straw marquetry and even pyrite with juxtapositions of shiny and matte surfaces. Warm neutral fabrics evoke a spirit of calm relaxation.

Undulating lines inform the floors and most of the furniture reflects organic shapes and is kept low to avoid obscuring views. What you won’t find on the concept for Slice’s interior are squared off doors and box-like rooms.

With Slice, Feadship wanted a yacht that specifically addressed a recurring owner request: an open and private aft pool and sundecks with sea views and out of sight of passers-by and deliverymen while moored in port. Slice delivers on this with a fully engineered passerelle and watertight forward entrance so it can be moored bow-in.

At the touch of a button, a full-height section of the stem at main deck level hinges open and a passerelle deploys, guests make a short walk from the quay, disappear into the privacy and security of the interior and arrive first a welcome area forward of the yacht’s tender bays.