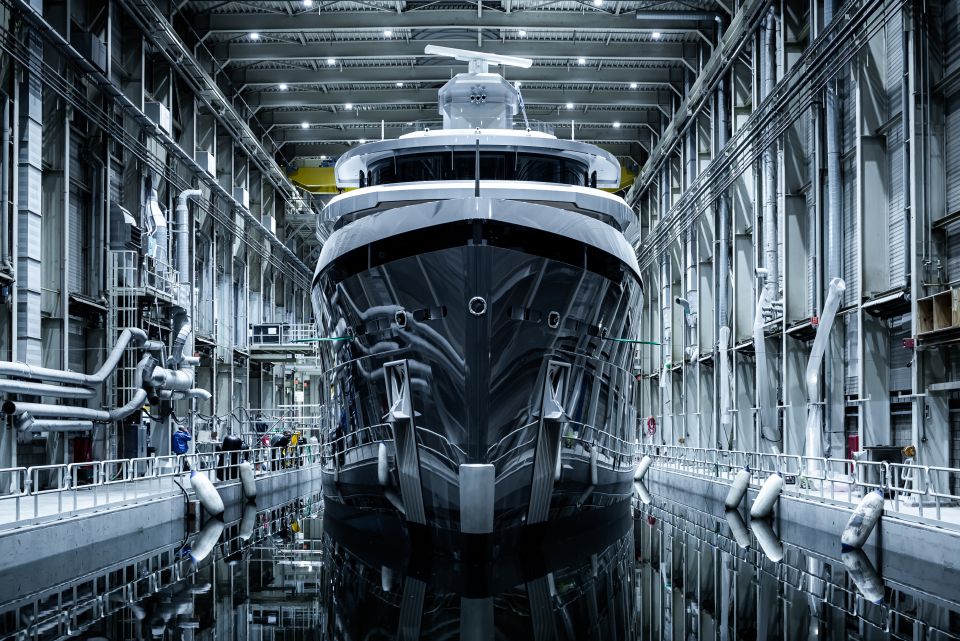 55-metre custom Feadship yacht Shinkai has made its first trip as it was moved from the Feadship yard in Aalsmeer to the outside dock for final outfitting ahead of sea trials and delivery later this year. New additions include a striking mast and the yacht’s very own submarine. It is also the first yacht of this size to have a gyroscope system for stability.

Like every custom superyacht, the design for Shinkai revolved around these specific choices of the client. In this case, the key was how best to incorporate a 7.2-tonne submarine on the aft deck along with the giant crane required for launching and collection.

Taking this as the starting point, designer Philippe Briand and the teams at Vitruvius and Feadship have developed a 55-metre explorer yacht, which will be able to travel the world while remaining both self-sufficient and fuel-efficient.

The many adventures Shinkai is expected to embark on in the coming years include taking on the North-West passage. The steel hull has therefore been built to ice class and includes an advanced WASSP sonar system to explore the ocean floor.

It is not being fitted with traditional stabiliser fins as these could potentially hinder the ability to retrieve the submarine in certain seas. For the first time on a yacht of this size, a gyroscope system has been fitted within the hull, with the tank deck arranged in such a way to enable traditional stabilisers to also be installed later if required.

Measuring 3 x 3 metres and weighing a hefty 23 tonnes, the gyro is the largest unit built to date and a heavy piece of equipment for a yacht built to go far on less fuel. More weight comes from the submarine, of course, and the massive crane required to lift 7400 kg when the sub is manned. This crane has an outreach of almost eight metres and will also be used to launch Project Shinkai’s limousine tender and lift the owner’s car and its crate from the aft deck to the shore.

These are exceptional preconditions for a 55-metre yacht in terms of weight and stability. The yacht also features a supremely comfortable Feadship interior, which has been designed in close cooperation with the owners by Boutsen Design.