How Dutch coaster Helge was salvaged after collision and crew evacuation 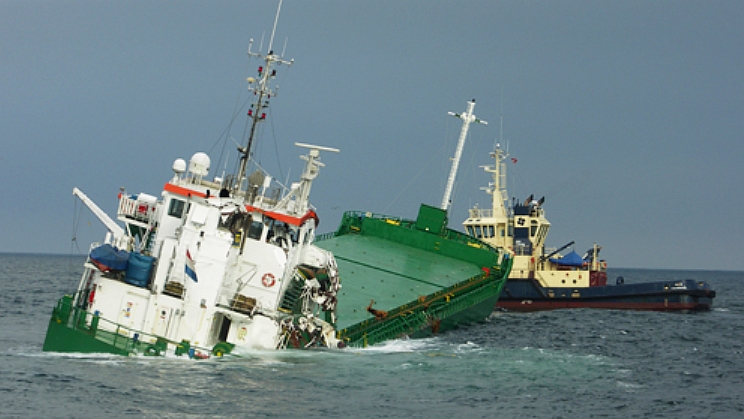 Early Friday morning, 9 September, two cargo ships collided in the North Sea 20 nautical miles west of Ringkøbing, Denmark. After the collision, the Dutch coaster Helge took on water and the crew had to be evacuated. The Danish Home Guard assisted in the salvage of the vessel before it could sink.

The Helge had collided with the Wild Cosmos, a 149.92 metre reefer built in 1998 sailing under the flag of the Bahamas, which could continue its journey after the incident. The collision occurred in heavy weather.

The 89-metre Helge, which sails under the Dutch flag, was built in 2013 and is managed by Erik Thun AB, suffered significant damage and was taking on water. The vessel was on its way from Antwerp in Belgium to Porsgrunn in Norway.

The seven crew members had to evacuate the vessel in a liferaft. The Danish Navy then rescued the crew from the liferaft by helicopter. Watch a video of this rescue operation below.

The Helge was left listing and rocking while the authorities had to come up with a plan. The Danish Home Guard (Marinehjemmeværnet) unit Flotilla 126 Hvide Sande/Ringkøbing was then called out on Friday afternoon to assist in the salvage of the Dutch cargo ship. They headed to the vessel with a crew of volunteers on board the MHV 806 Dubhe.

They reached the Helge at 5 pm. ‘It had heavy damage and a strong list,’ says rescue leader Nikolaj Hviid of the Danish Home Guard. However, the weather had improved and the vessel was now lying fairly calmly in the water.

At the same time as the Dubhe, Svitzer’s tugboat Sigyn arrived from Esbjerg, and the two vessels sailed around Helge to get an impression of the damage on the starboard side. A helicopter with salvage specialists also arrived at around 5 pm.

Hviid says the salvors were ‘hoisted down on Helge to say go for a tow, and they then helped get a tow established out to the tug. As the tow got underway and Helge was straightened out a bit more, some of the big holes in the hull came up just above the waterline, and then it was down to Esbjerg Harbour.’

The vessel subsequently safely arrived there around midnight.