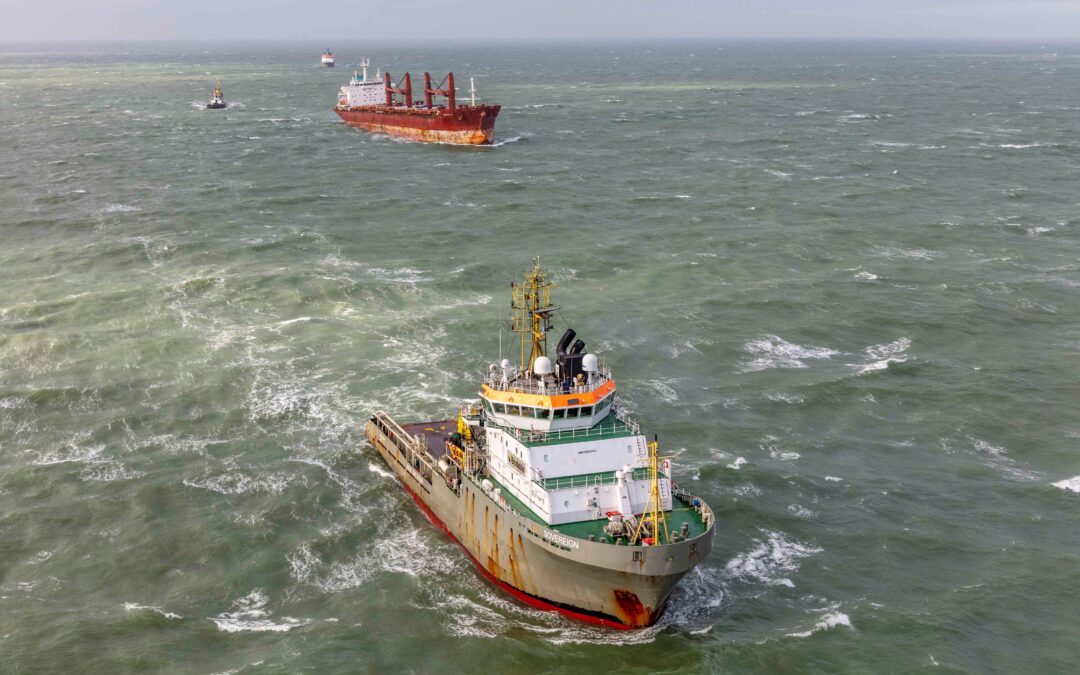 The bulk carrier Julietta D, which collided with a tanker on Monday 31 January near IJmuiden and was subsequently adrift for a large part of the day, has safely been towed to Rotterdam. The salvage was carried out by Boskalis’ tug Sovereign in cooperation with Multraship’s Multratug 18.

Both bulk carrier Julietta D and oil/chemical tanker Pechora Star were in an anchorage near IJmuiden, the Netherlands, on Monday 31 January, when the bulk carrier’s anchor gave way as a result of a storm. The vessels collided resulting in damage to the Julietta D’s hull. After the collision, the Julietta D was taking on water and the eighteen crew members were evacuated by helicopter. The ship then drifted towards the coast of Scheveningen and collided with an offshore platform.

Also read: Damaged Julietta D about to be towed to port of Rotterdam

The Sovereign, a large Boskalis tug, arrived on the scene yesterday at around 4 pm, followed soon afterwards by four salvors from Boskalis’ salvage division, Smit Salvage, who were airlifted onto the Julietta D by helicopter. At around 6.30 pm, the first successful towing connection was made, preventing the vessel from running aground on the Dutch coast. The Julietta D was then pulled further out to sea as a precaution, waiting for an additional tug.

At around 7 pm, the tug Multratug 18 of Multraship also made a towing connection, but due to the very rough conditions, this connection had to be severed. Today at around 1 am the Manta, a second large Boskalis tug, loaded with salvage equipment and an additional team of salvors was on site, after which a second towing connection was successfully made after sunrise. This secured the Julietta D and made it possible to tow the vessel to the port of Rotterdam where it has now safely arrived.